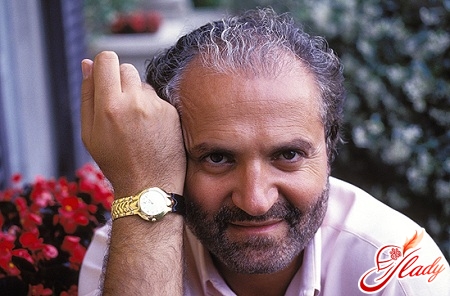 Versace fashion house pleases its fansunrivaled outfits for more than thirty years. The founder of the fashion house Gianni Versace created a unique image, struck the connoisseurs of beauty with frankness, glamor and sexuality of their outfits. In his women's collections, mini skirts, deep decollete, open backs and hands prevailed. It was Versace who revived the fashion for narrow trousers, tight suits and corsets. He never stinted on the most expensive and most beautiful models for his advertising companies.

Life and work of the Great Master 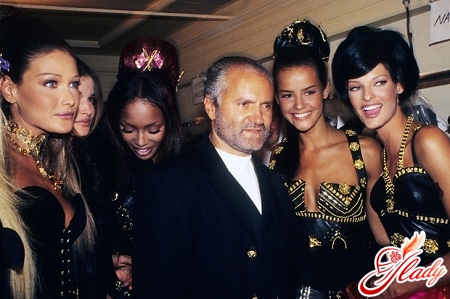 In 1991, Gianni came to visit hisfavorite sister Donatella in Miami. He was so impressed by this city that he immediately decided to stay in it. He was conquered by architecture, weather, people, and the spirit of carefree and joyful atmosphere that reigned in Miami. Most of all, this city reminded him of his native Reggio di Calabria, which he so much missed. Perhaps this move was a fateful step in his destiny. In 1994, doctors diagnosed Versace with a terrible disease - ear cancer. He was warned that without immediate treatment he could quickly die. The shocked family had a hard time experiencing the illness of his brother and supported him in every possible way. Gianni was so weak that he entrusted to his sister all the subtleties of the work and gave the opportunity to independently hold several shows. In 1997, the disease receded, and Versace returned to work. He was happy and cheerful and constantly insisted that all the best things were ahead of him. In July 1997, he showed a collection that critics called his best work. He was full of hopes and working plans. After the show, Gianni and his friend Antonio D'Amico went to rest home, in Miami. Somehow early in the morning, after talking with his sister on the phone, he went to the morning newspaper. When he returned home, already on the steps of the porch he was struck by a shot in the head. Doctors arrived immediately, but they could not save the designer's life: Versace died from a fatal wound. The police connected all the forces in order to find the killer. But neither the round-up nor the search could help them find a criminal. There were numerous rumors that Versace was killed by order of the mafia, because the designer was actively fighting the sale of clandestine clothing allegedly his brand. A week later, the body of the killer Versace, Andrew Cuenenen, was discovered. He committed suicide, having shot five others before that. The motive for Versace's murder is still unknown.

Many predicted a quick death at Versace's houseconnection with the death of his chief creator - Gianni Versace. However, Donatella continued the work of her brother. Collecting her will into a fist, she prepared for the three months since his death a new collection, which his brother did not have time to complete. She won, the show was very successful. Later, Donatella undertakes to create new collections independently. Someone says that her clothes are less sexy, but more wearable, and that this fact makes the collection more consumer than her deceased brother. And someone is sure that there is no second genius like Gianni Versace, and that he can not, and that it is not worth "marinating" his good name with a completely different style. Whatever it was, Donatelle Versace managed to maintain the glitter and glamor of clothing, the house Versace still lives and thrives. Now the collections are coming out under her own name, but the movie and music stars are still trying to buy her outfits. Versace is a synonym for beauty and sexuality.