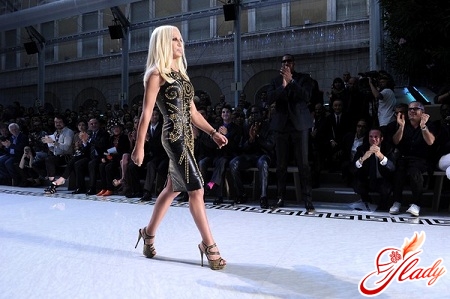 Donatella Versace - this is certainly one of thethe most talented Italian fashion designers, as well as the chief designer and head of the fashion brand Versace. This role she got after the death of her brother - a famous couturier Giovanni. A woman has everything - wealth, fame, recognition. But, to achieve this, she had to go through a tortuous and time-consuming way. About what tests fell on Donatella's share, and what she had to endure, you will read in our article.

The girl was born in Italy, in a small cozya small town called Reggio di Calabria. She was the smallest in a family of four children. At the age of twelve, her elder sister Tina died. Doctors could not detect a tetanus infection, so they prescribed inappropriate treatment, and as a result, the child literally burned out within a few days. Donatella's mother earned a living by sewing, and her father by trade, but the formation of an economist gave him the opportunity to earn extra money - he advised rich aristocratic Italian families. The Versace family owned a small atelier and a hardware store. Since early childhood, the elder brother of the baby Donnie (the so-called girl in the circle of relatives), Gianni was fond of, like his mother, sewing clothes. He himself invented the models, cut and sewed for the younger sister, and she, in turn, wore exclusively his creations. When the boy turned 25 years old, he left his hometown and went to Milan. After a short search he settled himself in several fashion houses: Istante, Genny, and also Callaghan. After graduating from university, in 1970 Donatella goes for her brother, in Florence and Italy she studies knitwear and plunges into the world of fashion. Meanwhile, Gianni holds the first show of the women's clothing collection under her brand (1978) and organizes her own brand. For the post of chief administrator in the fashionable house of Versace, who was in charge of finance, appoint Santo Versace, and Donatelle is given a more creative role - PR-director. She is responsible for organizing and conducting photo shoots and advertising campaigns of the company. Successfully combining work and personal life, in 1986, a woman marries a model of Paul Beck. Soon they have a firstborn born - a girl named Allegra, and three years later - boy Daniel. In 1995, paying tribute to love and respect for her sister, Giovanni releases in her honor a perfume called "Blonde." A little later, he gives her the right to distribute her own brand of perfumes - "Against". Subsequently they will become the inner line of the Versace house. Thus, teaming up joint efforts, putting their talent, soul and strength into the work, the team of the Versace family was able to build a grandiose fashionable empire, which only the elite can compete with today. 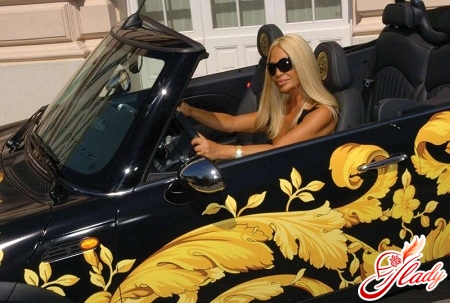 Giovanni adored his sister and believed that hertalent and skills will bring not only additional income, but even greater popularity of the Versace brand. Perhaps that is why in the eighties he entrusted Donatella with a serious matter - to lead a youth line of clothing under the brand Versus. Despite comparative inexperience and youth, the girl fully justified the hope placed on her. It was she who first proposed to use on the podium not only very few well-known models, but also popular stars of show business. Thus, appearing on the Versace show, they spread their fame and clothes to the fashion house, advertised it thanks to their name. In this role repeatedly performed by Madonna, Holly Barry, Demi Moore and others. Thanks to such a publicity, competently organized by Donatella, the glory of Versace flew around the world. Their outfits began to be interested not only in Europe, but also in America. In 1997, namely on July 15, a great misfortune occurred in their family. Going out for a walk, near the doors of his own house was shot Giovanni Versace. The killer was a homosexual named Andrew Kyunenen. A few days later, when a policeman surrounded him with a ring, police officers wanted to arrest him, the man committed suicide. There were no obvious motives for the crime, guesses began to circulate. Some thought that in order to take possession of a fashion house, the elder brother and sister of Gianni-Santo and Donatella became the customers of the murder. Others accused the mafia of everything, which seemed to wash their money in boutiques. However, none of the versions was confirmed. In order to avoid such explanations, the Versace family postponed all the cases and for some time disappeared from the annoying reporters in their villa in the Caribbean islands. Unfortunately, many people like not only to talk, but also want to cash in on someone's death. So, it is known that Donatella spent a huge amount of money in order to withdraw from the police materials all information regarding the death of his brother and stop the distribution of the investigation book about Giovanni. The author of the work was made by Frank Monte - a private detective who similarly cast a shadow on all the relatives of the famous Versace. After the death of a couturier, his niece, Allegra, inherited most of the shares (50%) of the fashion house. She also moved to a villa on Lake Como and a huge house in one of the richest areas of Manhattan. Despite the fact that Donatella Versace owns only a twentieth of the shares, while her brother Santo has 30%, she heads the brand. To date, under her work more than forty stylists work, the company produces seventeen clothing lines and owns three thousand retail outlets scattered around the world. In three hundred boutiques, located in different cities and countries, dresses connoisseurs and admirers of the brand Versace. 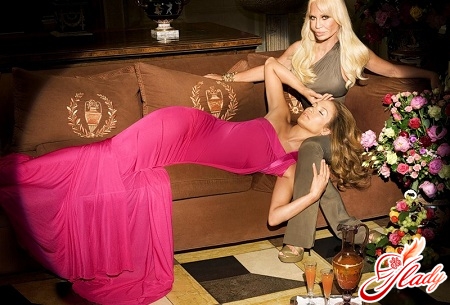 At the head of business

Many were skeptical about the appointmentDonatella head of the fashion house. Envious people believed that she was not talented enough, ambitious and not smart enough to successfully continue her brother's business. However, she proved that they are wrong. The woman held the empire on its fragile shoulders, giving it new features, but, nevertheless, not lost among the competitors. Three months after Giovanni's death, Donatella presented her first full-fledged collection for the spring-summer 1998 season to critics. "I have never considered myself a strong woman. However, the circumstances developed so that I had to try on this role. And, in my opinion, I did well "- frankly Donatella. Even more popular with the designer was the Green Dress, or, as many call it, the "Jungle Dress", designed by her personally. Appearing in this dress at the presentation of the Grammy 2000, Jennifer Lopez not only shocked the audience in her own way, but also gave an extra reason to admire and talk about Versace. Responsibility for the business, which was a dead weight on Donatella's shoulders, as well as an emotional trauma after the death of a native person, could not but affect her behavior. With one hand managing a fashionable empire, another woman reached for a glass. Gradually, she became a frequent guest at all kinds of parties, closed party celebrities, addicted to alcoholic beverages and cocaine. Only thanks to the efforts of her family, she managed to get herself in good time. In 2004, after long quarrels and persuasions, Donatella agreed to undergo a course of rehabilitation in a specialized clinic. The fight against drug and alcohol addiction was successful, and a year later the renewed Versace released another collection. Fashion critics unanimously recognized her as "the brilliant beginning of a new era in the history of Versace." In his work, the designer does not adjust and does not copy the style of his great brother. In the tradition of the fashion house, she continued to produce clothes made in the style of "sexy glamor." Despite this, many experts believe that Donatella could not follow in the footsteps of Gianni and repeat his success. "Many of my responses were not very flattering about my shows. But I always knew that I could not become as great as a brother. What he did was exclusive. And to us, to remain on the wave of popularity, we need to look for new ideas, "admitted Donatella. She did not listen to gossip, fought off criticism, tried and worked. As a result of painstaking work, her collections became more comfortable and feminine, of which aggressive, screaming sexuality disappeared, but Giovanni's invariable style did remain - exquisite luxury and eroticism are present in all Versace outfits. Despite the negative reactions of envious people, this brand still remains popular all over the world. He dresses the richest and most successful people: actors and actresses, politicians, show business stars and others. Due to the efforts of Donatella, to date Versace is not only clothing and accessories. These are also interior elements, collectibles, which are exhibited in the largest authoritative museums in the world. After leaving this world, Giovanni took with him a piece of the holiday and the splendor with which he filled the atmosphere around him. Of course, no one will be able to create the same way as the great couturier did. However, Donatella, along with his brother Santa, did everything possible to make the glory of Versace fly around the world. In addition to this business, they are the owners of luxury hotels in the UAE and Australia. 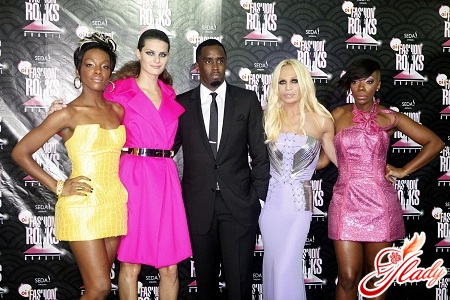 Since the early 90's, Donatella has been in charge of productionaccessories, some of which she designs with her own hands. Subsequently, her work forms a children's line called "Versace Young". After eight years, the designer creates his first perfume "Versace Woman". A couple of years later, in London, there is a retrospective exhibition "Versace", on which, in addition to the models created by Giovanni, exhibits developed by Donatella personally are presented. Wanting not to stand still, but to constantly evolve, it improves in design - designs cars and yachts, and launches a new line of sweets. In the winter of 2005, Versace won the award as "Woman of the Year", and later - "Designer of the Year". We advise you to read: