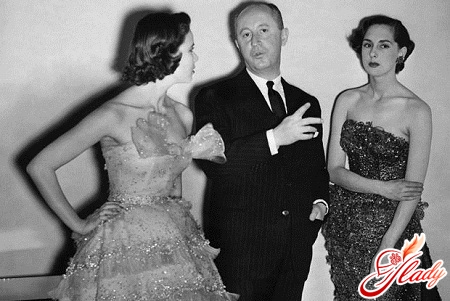 Christian Dior is a great French couturier,who showed the world a completely new image of a woman: elegant, feminine, refined. He became an absolute legislator of the fashion of the 50's, each season offering a beautiful half of the "fresh" silhouettes. First introduced a licensing system, the guru created a whole fashion empire. The first small store Dior opened in 1948, seven years later his doors opened its "grand boutique", where not only gloves, hats, underwear, shoes and a variety of perfumes, but also accessories for the home were sold. In 1957, after the "departure" of the great genius, the head of the Dior empire was his assistant named IS-Laurent. After a lapse of four years, Mark Boan was elected Art Director, and in 1989 Gianfranco Ferre replaced him. Women's collection, since 1997, leads the inimitable John Galliano. In 1967, the first show of the women's collection Dior "ready for wear" (pret-a-porter), from the beginning of the 70s the men's clothing line was launched, and since 1973 the fashion house began to develop fur outfits. The biography of the future couturier is an indicator of strength of spirit, firmness and perseverance, thanks to which the name Dior is known all over the world.

Christian Dior was born on January 21, 1905. The boy's childhood was spent in the small town of Granville in Normandy. In 1911, his parents moved to Paris, where they settled down in an area called Passy. His family was well-off. My father was engaged in the sale of chemical fertilizers: an innate flair, ingenuity and the ability to trade brought him a stable good income, which his wife with the inherent ease of women turned into a variety of pleasures. Despite the fact that in addition to Christian, there were four children in the family, the children did not need anything. The boy received his primary education at home. He loved to draw and spent all his free time doing it. The dream of a young Christian was studying at the School of Fine Arts, but his mother and father opposed this venture. At the behest of his parents, the boy began to prepare for a career as a diplomat. To this end, Dior Jr. even enrolled in the first course of the Free School of Political Science, but this idea was not crowned with success - instead of laid lectures on law and geography, the young man spent all his time in the walls of museums, examining the paintings of great artists, taking painting lessons and learning the nuances of the artistic composition. Therefore, he soon abandoned his studies at the prestigious Academy of Political Sciences and gave himself completely to art. 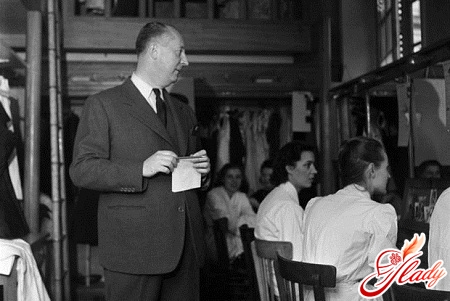 The beginning of a long way

In 1928, together with his friend Christianopened his art gallery, where the works of such great artists as Salvador Dali, Pablo Picasso and Jean Cocteau were exhibited. The guy always treated with respect and superstitious trembling to fortune-tellers. He believed in their predictions and he himself could spend more than one hour laying out his solitaire. Once, while still a boy, in a children's carnival, Christian, dressed in his own tailored gypsy costume, was selling amulets, and one of the palmists suggested reading his future on the arm. She predicted: "You will be left without money, but women and women will bring benefits and wealth to you." Ten years later, in a family estate in Granville, a strong wind broke a family mirror. Dior, giving great importance to the symbols, realized that ahead of him are waiting for trouble. So in the life of a twenty-five-year-old man began a black streak. 1931 became tragic for Christian. At first, his younger brother, who had been a strange child since childhood, got into a closed psychiatric clinic, where he later spent his entire life. Then, his mother dies of cancer, and his father falls ill with tuberculosis and suffers bankruptcy. Closed and the gallery, which is mostly funded by his parents. Not knowing how to go on living, Christian decides to challenge the fate. At that time the whole of Paris was covered with leftist ideas, and a group of young architects, inspired by the dreams of a world revolution, are going to the Soviet Union. Christian, who appreciated Russian art and bowed before him (his idols were Diaghilev, Malevich, Stravinsky, Nijinsky, and also Chagall, Archipenko, Soutine and others), finds money and is adjacent to the delegation. However, he was greatly disappointed - instead of the great changes and accomplishments, the man watches empty display cases, flaky facades of gray buildings and poverty. Meanwhile, fate is preparing him another unpleasant surprise - Dior is ill with tuberculosis. Thanks to friends who collect the right amount, the man goes for treatment in warm Spain. There, on the distant island of Ibiza, alone with his thoughts, he finally finds "himself." Then he decides to return to his homeland and dedicate his life to what he wanted to do from early childhood - to sew clothes. It was then, after military service in 1935, Christian began selling fashion houses sketches of dresses and hats, which first published the magazine Le Figaro Illustre. Despite the fact that the models of his headdresses were more popular, he still decided to specialize on clothes. In 1938, Dior entered the fashion house of Robert Piquet, working in parallel with Lucien Lelong.

Dior always had a weakness for flavors. He explained his plan in such a way: "So that all my outfits will appear, and every girl who wears my clothes would leave a fragrant trail of desires, just uncork the bottle. After all, perfume is an unsurpassed shade of feminine individuality, the final touch of the image or, as Lancre signed his creations, is a "rose" for the dress. " Following the dream, in 1942 Christian opens his perfume laboratory, which later grew up in the Christian Dior Parfum. In 1946, with the help of a sponsor - a textile manufacturer named Marcel Boussac - Christian opens his own fashion house near the Champs-Elysees, which in the 50s was the most profitable and large in Paris. With him began the career of such great designers as Yves Saint Laurent, Pierre Cardin and many others. After twelve months, the couturier produces the first collection of clothes called The Corolla Line. It was a completely new, unprecedented "romantic collection". This included skirts to the ankle, either very narrow or lush wide, wasp waist, kimono sleeves, a smooth line of shoulders, high heels, contrasting accessories. The woman with the eyes of the designer looked like a gentle, graceful creature, dressed in elegant, refined outfits. This is what the ladies of that epoch, "impersonal" with gray uniforms, lacked. Creating this collection, Christian did not guess that with her, he will pave the way to a great career. At first, they were skeptical about the new-fashioned couturier, with apprehension, but a year later the first women of fashion not only in Europe but also in America adopted his style. Thanks to innate optimism and a keen sense that allowed Christian to guess the wishes of the post-war, "tired" of France's struggle, he became one of those who influenced the revival of Paris as the capital of world fashion. Together with his companion, he was the first to introduce licensing agreements into the model business. In the late 40's, the designer ordered the licensing of production of its own models in different countries around the world. So there was a brand name Dior, now known to everyone. 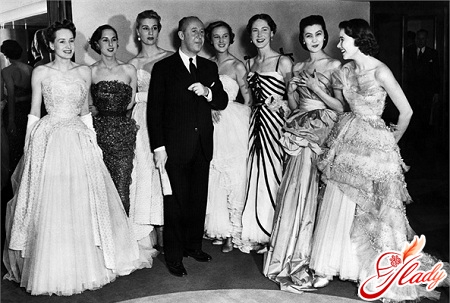 Death of a couturier

The great couturier Dior lived fashion and worried about herand a few months before his death he wrote: "The appearance of High Fashion is justified by two reasons. Firstly, it is a real treasure of hardworking and honest artisans. It goes ahead of time, ahead of it, it is haute couture that will become the determining factor in the fashion trends of Paris in the future. From the designer, she will go to stores and boutiques, then to the producers, and from there she will "go out" to the streets and "grab" all the shop windows. And then each person, depending on their wallet, will become fashionable. " The designer died on October 24, 1957 in Italy. In the family estate, which is located in his hometown of Granville, the Christian Dior Museum is now open. Tens of thousands of fans and tourists are visiting it every year. In 1999, John Galliano was appointed Creative Director and Director for Advertising at the Christian Dior Fashion House. Thanks to him, Dior's name began to play in a new way, he was able to reveal the sexier and younger side of the brand. Fashion House Christian Dior presents collections for men, women and children "haute couture" and "pret-a-porter", and also produces a line of cosmetics, perfume and accessories. We advise you to read: