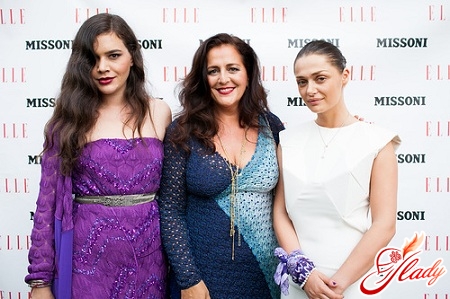 Missoni is a world-famous brand based inMilan and famous for his famous zigzags. The bright drawing is decorated with tops, skirts, decollete dresses. Homemade shapeless jersey turns Missoni into a seductive air material. In addition, in addition to fabulous zigzags, the brand has become famous for smooth, perfect seams, thanks to which the joints of the parts are practically not perceptible. Missoni brand clothes are universal, it is appropriate at home, in the office and at a social event. Agree, there are more than enough advantages for one company? So, what is the secret of Missoni's success? Let's try to figure it out. And start, perhaps, with the main - the brand itself and the history of its occurrence. 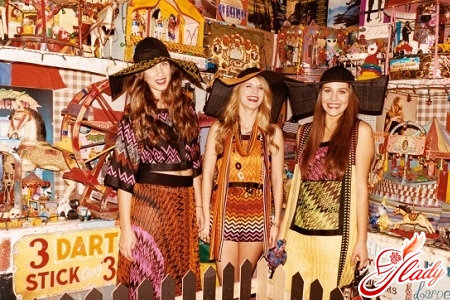 However, you can not write about the company without rememberingabout its creator. Ottavio Missoni was born in the ancient city of Dubrovnik in the south of Croatia in 1921. As a six-year-old boy, Ottavio and his parents moved to the town of Zadar, where his youth passed. From serious hobbies Missoni it is possible to note employment by track and field athletics. Ottavio was a serious athlete and even managed to win eight national titles before the Second World War. However, all the dreams of a sports career destroyed the war. Missoni went to the front. It can not be said that the time in the army was as cloudless as life on a civilian. In 1942, Ottavio takes part in the Battle of El Alamein and as a result is captured by the Allies. He had to be protested in the Egyptian prison camp for as long as four years. After that (in 1946), the exhausted soldier returned to Italy. There Ottavio quickly comes to his senses and even enters the lyceum Oberdan. But one scholarship can not survive, and enterprising Missoni, along with his friend Giorgio, opens a small workshop for the manufacture of Venjulia sports suits, which later became the main form of the Italian Olympic team. Apparently, the success of the event was due to the fact that Ottavio is a former sportsman, and he knows how many suits are needed during long training. One way or another, but his own business not only benefited the young man, but also helped to find happiness in his personal life. Ottavio Missoni in 1953 gets acquainted with Rosita Gelmini and makes her an offer. And here is a workshop for the production of sportswear, you ask? The fact that the future bride was the heiress of the factory for the production of embroidered fabrics and scarves, so the young had much in common. We must admit that the newlyweds very quickly joined their efforts and created the company Missoni. It happened in the year of their marriage. Originally it was an ordinary knitting workshop. Spouses long sold small products to random customers before they received a large order. Knitwear in especially large sizes was needed for the famous house "La Rinashente". Need I say that Ottavio and Rosita Missoni brilliantly coped with the order? Therefore, in 1966, its own brand Missoni. The workshop had equipment that produced only smooth and striped fabrics. That is why, and not in connection with the creative ideas of the spouses, there appeared the famous and recognizable worldwide Missoni drawing. Another lucky case was the defile of 1967, when Rosita asked the models to remove bras to avoid destroying the geometry of the dress. But she did not think that under the light of soffits dresses will become translucent. And in the end this event turned into world fame. 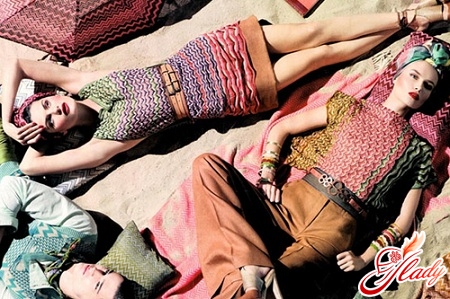 1958 - the world of fashion was introduced to the firsta collection of Missoni called "Milano-Simpathy". 1965 - Rosita's acquaintance with French stylist Emmanuel Cannes. There was a landmark event in New York and led to fruitful cooperation. April 1967 - Missoni spouses were first invited to the Palazzo Pitti (in Florence) for a fashion show. 1970 - Missoni, with the support of the editor of American Vogue Diane Vryland, opened the first boutique in the department store Bloomingdales. 1976 - Ottavio and Rosita open their first boutique in Milan. 1978 is the 25th anniversary of the Missoni fashion house. In honor of this grand event held screenings in New York and Milan. 1979 - the company for the first time creates a line of men's clothing. In the same year, the Missoni brand received a diploma "For contribution to the cause of the Italian Republic" and a medal "For Civil Merit". 80's - the company creates costumes for the opera Lucia di Lammermoor by Gaetano Donizetti. 1994 - the 40th anniversary of the brand, which the couple celebrated with an unusual exhibition "Missonology - Missoni's World", which was successfully held in several countries around the world. 1997 - Ottavio and Rosita transfer the company to the management of Angela Missoni, her daughter. 2005 - The Missoni brand signs a contract for the construction of hotels with Rezidor SAS. The first buildings appeared in Kuwait, Edinburgh and Dubai under the name Missoni. We are sure that the chronology of the company Missoni does not end there, and the fashion brand will be pleased with variegated zigzags for more than one generation.