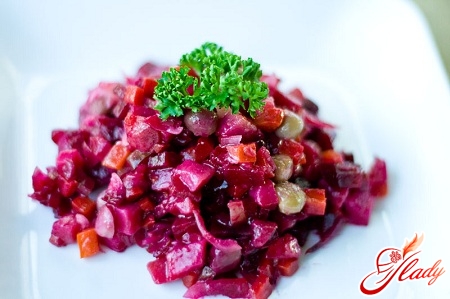 Many believe that the recipe for vinaigrette exists inour kitchen from time immemorial. However, the dish is relatively young. There was a recipe for this salad during the reign of Alexander I, and before these times salads were generally untypical for the Russian menu. So, this dish is called vinaigrette only in our country, and it is known all over the world as a Russian salad. Over time, the classic vinaigrette changed: all kinds of additional ingredients were put in it, experimented with dressing and as a result, the recipe for vinaigrette is known in a variety of options: with fish, with meat, with chicken, with fresh cabbage, with beans, with herring, with mushrooms ... However, The recipe has not lost its popularity, although, as it really looks, not everyone knows. Therefore, we suggest you to restore justice and write in your culinary book a recipe of classic Russian vinaigrette. 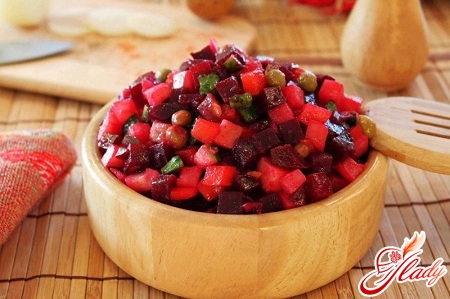 The recipe for classic vinaigrette is a recipesalad, which was served in restaurants in Moscow, St. Petersburg and major provincial cities in the 19th century. If you consider the classic salad recipe for this particular salad, then it included the following main ingredients:

Potatoes, beets and carrots are placed in the vinaigrettenecessarily chilled, and cabbage is taken not pickled, but sauerkraut! All products for vinaigrette are taken in approximately equal proportions, only carrots put a little less, and onions a little more. In addition, in the classic Russian vinaigrette was added boiled hard-boiled and finely crumbled egg, and sometimes soaked in milk herring. In the latter case, the recipe for vinaigrette excluded sauerkraut, and the amount of potatoes and onions increased. Classical was the filling for vinaigrettes, which consisted of a mixture of fragrant vegetable oil, 3 percent vinegar, black pepper and salt. The preparation of this Russian salad is enoughartlessly. However, even here there are rules and secrets. The main products are taken in approximately equal proportions. Potatoes, beets and carrots are boiled in a peel and in a peel it is cooled. Only with the cooled vegetables the peel is removed, after which they are cut for vinaigrette. Boiled vegetables and salted cucumbers are cut only in cubes, and onions are semirings. The main advantage of delicious vinaigrette is the preservation of the taste of each ingredient. Therefore, the vinaigrette is harvested just before serving and never for a long time is it stored in the refrigerator. Refueling for vinaigrette is always prepared separately. To do this, mix the oil and vinegar in a ratio of three to one, season with salt and black pepper to taste and shake well. Season the vinaigrette at the very end of the preparation, pouring sauce into the salad gradually, in small portions. The sauce should be just enough so that it only absorbed into the vegetables, but did not float at the bottom of the salad bowl. So, for classic vinaigrette we boil potatoes, beets and carrots, we cool them, clean them and cut them into cubes. Cut cubes of pickled cucumber and onion rings. We put into the salad bowl first sauerkraut and onions, then carrots and potatoes, and then cucumbers. We make refueling. When the sauce is ready, put the beetroot into the salad, stir the salad and fill it. On top, sprinkle the vinaigrette finely chopped boiled egg and spring onion and serve. That's all - we got a classic vinaigrette: a simple, tasty and healthy Russian salad. Of course, you can diversify the classic recipe according to modern realities and add green peas or olives to it. You can replace salted cucumbers with pickled ones and do not put eggs in the salad. But if you wanted to cook a classic Russian salad, then do not do it: try to do without excesses. Cook with pleasure, and a pleasant appetite for you! We advise you to read:

Salad with chicken and oranges

Chinese cabbage salad with chicken: fillets and not only