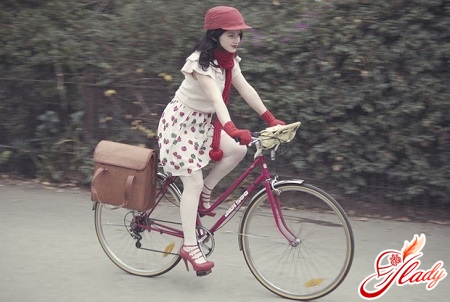 Annually in the world is issued about fiftymillions of bicycles, which means that a large part of mankind prefers to lead a sporty, healthy lifestyle. What is the use of a bicycle for human health? Yes, it is simply invaluable: this is a beneficial effect on the musculoskeletal system, and treatment of vegetative dystonia and varicose veins. With the rotation of the bicycle pedals, the muscles of the pelvis and legs are simultaneously involved in the work, which trains the ankles and calves, abdominal muscles and thighs. In addition, cycling raises the mood and distracts from everyday problems. Many books and articles have been written about the benefits of the bicycle, because we live with you at a time when healthy and sporty is not only useful, but also fashionable.

Why a bicycle is better than a TV

Remember, as a child, we loved to drive onbike around the yard, never tired of pedaling all day? Unfortunately, becoming more mature, we are less and less likely to find time for a two-wheeled friend and hardly think about the fact that cycling is just necessary for us now - during periods of constant stress and chronic fatigue. Having come home from work or school, we wearily sit down for a computer or TV, confident that this is the best holiday. Only reddened eyes and frequent insomnia slightly hint that we are doing something wrong. Maybe it's worth looking for another option for an evening getaway - for example, cycling? The use of a bicycle at our furious pace of life is undeniable. Hundreds of large companies engaged in the production of goods for sports, provide consumers with various exercise bikes. Who deals with them in the fitness center, someone hurries to buy it home, but still no one even the best simulator can replace a real bike ride in the fresh air. It would seem, what's the difference? But the wind in the hair, the yellow leaves on the sidewalk, the birds circling high in the sky - only this can be charged with positive energy and smile without cause for the rest of the day. Is it possible to get such a feeling while sitting on a stationary bike in the stuffy room of the sports center? And then, a woman on a bicycle - it's just very beautiful! The chest is forward, the back is temptingly curved. Pop - back, smoothly moving in time with the movement of the pedals. What man can stand and not admire the passing beauty? It is hardly possible to achieve the same effect, sitting at home by the TV and eating up the last hamburger. So do not hesitate for a long time: the bike and figure will help, and the mood will raise, and health will save. 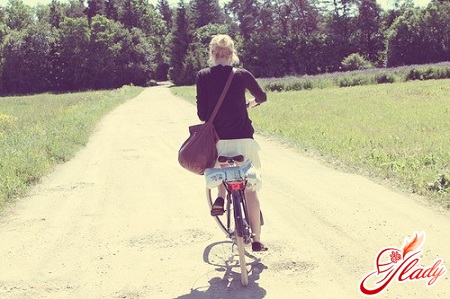 Benefits of a bicycle for health

Perhaps the greatest benefit of a bicycleis that the respiratory system works very actively during the ride. Making long bike tours, we force our lungs to work at full strength. As a result, the blood is enriched with oxygen coming to the cells of the brain and other internal organs. Especially great is the benefit of riding a bicycle for those who smoke a lot: during the movement in the lungs, aeration occurs, which contributes to the release of accumulated harmful substances contained in tobacco. If you suffer from varicose veins, then you just have to try cycling! By actively rotating the pedal, you force the blood to run through the veins at a high speed, which helps reduce nodes of stagnation in the vessels. Even if your legs are completely devoid of unpleasant venous "mesh", prevention of the disease in the form of regular riding a bicycle will not hurt you. Another undoubted advantage of the bicycle is the improvement of the cardiovascular system of man. At the time when you pedal, your heart muscle is intensively contracted - your heart is training for endurance (not for nothing, exercise bikes are called cardio machines). The only point: do not overdo it! If you do not calculate your strength and give your heart an excessive load, then instead of good you will get serious health problems. It is no less useful to ride a bicycle for your nervous system. Agree that riding a bicycle is not only a physical exercise, but also a distraction from problems, and the opportunity to relax alone. Sometimes valuable thoughts and non-standard solutions come precisely during a leisurely walk on a bicycle. It's been noticed that there are a lot more stress-ridden people among cycling people (which is a definite plus in our crazy time, right?) And did you know that moderate cycling of a pregnant woman helps an unborn child to receive the same benefits in terms of health and development, as his mother? Scientists from the University of Michigan found that those women in the position that regularly make moderate bike tours, carry the pregnancy much easier, and the chance of deviations in the fetal development of their children is fifty percent lower. Of course, you should not sit behind the wheel of a bicycle to women on the last days of pregnancy, as well as those who are not friends with the sport and do not feel very confident on a two-wheeled friend. But experienced bicyclists throw two-wheeled vehicles during pregnancy is not necessary. Surprisingly, riding a bicycle is an excellent prevention of myopia! The fact is that during the movement you constantly look in different directions, change the angle of view, and also look at the objects distant from you. On the best gymnastics for eye muscles and do not have to dream! If you are not attracted to the idea of ​​an ophthalmologist coming to see you for glasses or contact lenses for your eyes, just remember your two-wheeled companion and go with him for a wellness trip. And, of course, bike walks are shown to everyone who wants to lose a few pounds of excess weight. When driving at a speed of about nineteen kilometers per hour, you can burn six hundred kilocalories. In addition, cycling helps to speed up metabolic processes in the body, which means that you will lose weight much faster. For example, with an unchanged diet, but with daily cycling, for the year you can throw six or eight kilograms of excess weight. If you want to achieve a more impressive result, then you need to add proper nutrition to sports. Biking is not only work and physical activity, but also pleasant entertainment. Agree that losing weight, having fun, is pleasant? Among other things, girls who are keen on cycling have a well-developed sense of balance and coordination of movements. Yes, and the speed of the responses they have an order of magnitude higher than those who are not familiar with cycling: unusual situations on the road, the need to quickly make decisions do their job! And besides all the above advantages, you can simply expand your horizons: after all, not only around the house you will ride! There will come a day when you decide to ride a bike outside the city to enjoy the surrounding views away from such a bored city bustle. And there are close to group trips by bike in the company of like-minded people! The benefits of a bicycle can be said endlessly, because besides all the advantages that it gives to our health, the bicycle is also the most environmentally friendly transport. You do not pollute the environment, and the production of your two-wheeled friend spends only about five percent of the energy used to create the car. 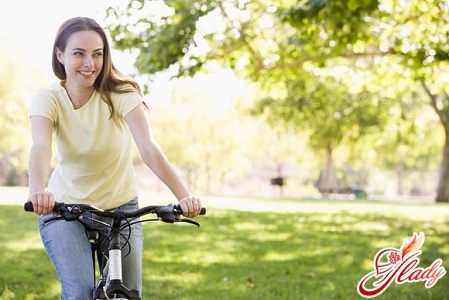 Interesting facts about the bike

The technique of proper running, or how to run in the evenings

How to run correctly to quickly lose weight: recommendations for beginners

Complex of exercises for hands

Carol Maggio: aerobics for skin and facial muscles, or the best exercises for losing weight