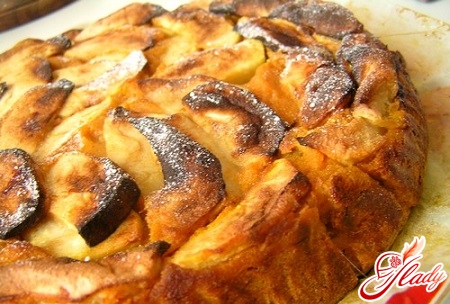 Today, under the sights of our culinary attentionPie with pumpkin and apples. Perhaps, some of this combination will seem doubtful - they say, there is absolutely nothing tasty in it. This only says that you have never tried such a delicacy. Not only is the fruit dessert incredibly delicious, it's also very useful. We think that the nutritional properties of pumpkin and apples, as well as the substances and minerals contained in them, should not be mentioned. After all, about this and so at every step experts say, and we better share the secrets of cooking. Decorated appropriately, for example, whipped cream, powdered sugar or a homemade ice cream ball, the cake will take a worthy place even on a small family celebration. The food is sure to appeal to the adherents of a healthy diet, but the usual admirers of sweet will also come from him in raptures. After all, at least once having tasted a pumpkin pie and apples, it is no longer possible to refuse it. Do not believe me? Then prepare the dish and bite off a piece. 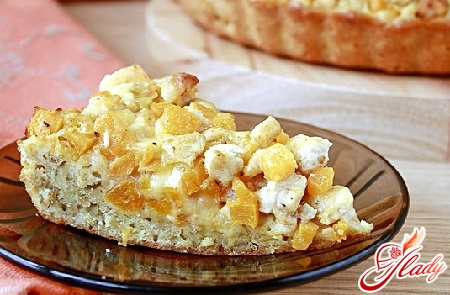 Pumpkin-apple pie with cinnamon and nutmeg

In fact, cooking pie from a pumpkin andapples under the power of any person. Even if you do not belong to the category of great cooks, but only comprehend the basics of cookery, do not be afraid to take this recipe in hand. The food is so simple to handle that even a teenager can bake it. The main thing is to follow the instructions given below. In addition, the products used to prepare the dish, of course, should be fresh and quality. Just a few of these components plus a little effort, and 45 minutes of time spent will ensure success. Ingredients: Dough:

Cooking method: Pumpkin pie, in principle, like any other dessert, begins with the preparation of the dough. This, so to speak, the basis of baking. To make it easier for you to cope with the mixing of the mass, we advise you in advance - at least half an hour before the start of the culinary procedure - to get food from the refrigerator. Lay them on the kitchen table and let go. Then get down to business: chop small pieces of butter, then combine it with granulated sugar and with zeal, actively working with a fork, rub to a homogeneous state. Now in a separate bowl sift the wheat product, add to it the right amount of baking powder. Mixture of dry ingredients pour into the oil. When you are done, again rub the mass with a spoon. As a result, you should form a dough, ideally the appearance of which resembles bread crumbs. If you can achieve this effect, then you acted correctly. However, we have not finished yet: in a deep bowl, beat the yolk with vanilla sugar, and enter the amount of sour cream specified in the recipe. With active movements of the corolla, sweat the ingredients, then combine the mixture obtained with the oil and flour paste. Knead it with your hands, act actively, with effort. Put the dough on a table, sprinkled with flour, roll into a bowl and wrap it in a special film. Clean in the refrigerator for about 35 minutes. You have enough time to tackle the stuffing. Therefore, cut the skin from the pumpkin, chop the remaining pulp into small cubes. Then, wash and dry the apples, first remove the skin from them, and then the core, cut the fruit in the form of thin straws. Now heat the frying pan, throw a piece of butter into it and wait until it melts. Pour sugar into the dishes, stir, then enter pieces of apples. Reduce the flame and fry the fruit until they are sufficiently softened and do not get a darker shade. It was the turn of the pumpkin: put it in a bowl to caramelized fruit, cover and simmer with minimal heat. If necessary, you can add a spoonful of boiling water, then the products will not burn, but will become even softer. The main thing is not to overdo it, otherwise the filling will be too liquid that it will ruin the future cake. Cut a quarter of an hour, after this time, sprinkle a lot of cinnamon and ground nuts, add ginger. If the mixture does not seem sweet enough, add a little sugar. Stir foods and hold them on the stove for another five minutes, then remove from heat and cool. We smoothly approached the final stage - the assembly of the dish. Lubricate the baking dish with a piece of butter and sprinkle with breadcrumbs. Thanks to the latter product will come out ruddy and crispy. Take the dough, divide it into two parts, one of which should be slightly larger. Take it and roll it into a thin layer, repeating the shape of your dishes. Place the product in the last, slightly raise the edges to close the sides. Fill the top with a smooth layer of fruit filling. Now roll out the remaining dough with a rolling pin, cut it into thick strips. Then twist them in the form of a spiral, which you need to distribute on the surface of the pie, in the end you will get a kind of "grid". Take the protein and carefully beat it with sugar, the cream obtained, treat the dish from all sides and sides. Remove it into the oven, preheated to no more than 200 degrees. Mark 45 minutes, then take out the dessert, wait until it cools down. Before serving, sprinkle the dish with powder, decorate with mint. 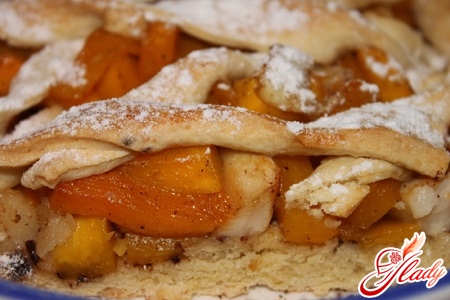 If you decide to bake an appetizing and delicate pumpkinpie, be prepared for the fact that your child will not take the dish to cheer. After all, only with age do you understand that desserts should not only be tasty, but also useful. To the food the kid liked, we recommend adding a few apples and raisins to the filling, then it will come out more juicy and sweet. In addition, before serving, decorate the cake with a ball of orange ice cream. By the way, you can also do it yourself. We offer to consider the recipes and surprise your family with an appetizing delicacy. Ingredients: Filling:

Cooking method: For starters, we recommend making ice cream. While it will freeze, mix the ingredients for a future test. So, in a deep bowl, combine the sour cream with the powdered sugar, carefully whisk them with a special whisk. It is best to use an immersion blender - so you will get a perfectly homogeneous and very lush mass much faster. So if you find this kitchen appliance, be sure to whip the food to them. As soon as you can, grate chocolate on the smallest grater, cut the peel from the orange, remove the excess film and crush it in the same way. The resulting fruit mass, along with sour cream, put in a bowl for a blender, here also enter chocolate chips. Mix the food several times so that you get a dense, lush mixture. Spread it in a mold and send it to the freezer. Now you can with a calm soul pay attention to the pie. So, first sift the flour, then combine it with the baking powder, and also with the sugar, here enter the softened butter, chop it with a knife into small cubes. With active movements, putting maximum effort, begin to grind the ingredients with a spoon. Continue to act in the same spirit, until the mass in appearance does not begin to resemble a crumb. Now, in a separate bowl, whip protein and vanilla essence into a lush foam, add the sour cream. The resulting mixture pour into the previous products, mix several times, then knead with your hands an elastic, moderately dense short pastry. Roll it into a small ball and wrap it in a food film, put it in the refrigerator. It remains to prepare the filling and assemble the product. So have patience, and very soon you can enjoy the aroma and unsurpassed taste of fruit dessert. After you clean the pumpkin of thick peel, cut the flesh into very thin slices. From pre-cleaned apples, remove the unnecessary core, then separate them with thin slices, raisins rinse under the tap and soak for 20 minutes in warm water. Melt butter in the saucepan, combine it with sweet powder, fry for a minute, then put pieces of pumpkin in the dishes. Stew the product with constant stirring for no longer than 15 minutes. Once it becomes soft and changes color, add apples. Reduce the flame of the burner, enter raisins and cook the fruit for a while. At the very end, sprinkle them with cinnamon and ginger, then enter the nutmeg. Mix the stuffing well and cool it a little. Well, are you ready to start assembling the pie? Then proceed as follows: treat with oil the inside of the mold, if desired, sprinkle them with breadcrumbs, then the pumpkin dessert will turn out with a crisp crust. Place the dough on the table, sprinkled with a small amount of flour. Divide it into two portions, then roll a large one into a thin layer, which from the inside "cover" the dishes for baking. Be sure to raise the edge of the product slightly. The remaining mass in the same way roll out, only now cut it with strips of medium thickness. After each of them, coil. On the first layer of the dough, evenly spread out the filling of pumpkin, raisins and apples. Smooth it with a spoon, then build a grid on top of the dough pieces. Combine a chicken egg and sugar in a bowl, whipping with whisk, turn them into a magnificent foam. With the resulting mixture, treat the product from all sides. Remove it in the oven heated to 200 degrees, after 40 minutes, take it out and cool it, then cut into portions, lay it down on the saucers, decorate the ice cream and call everyone to the table. Such pumpkin pies, whose recipes are now familiar to you, are very juicy and quite appetizing, but most importantly, useful. So study together with us new culinary instructions and prepare the right, healthy dishes.

Cake with oranges and apples

Grated cake with apples: a recipe for an amazing dessert

Curd cake with apples: a recipe for a delicious dessert for the whole family

The most delicious pie with apples: recipe

Pie with apples on yogurt - simple and tasty