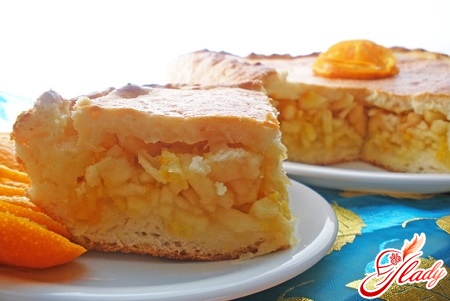 Want to cook an unusual apple pie? Then we can offer exactly what you are looking for - an apple pie with oranges. By the way, do you know that the word "orange" is translated into Russian as "Chinese apple"? So, by and large, a pie filled with apples and oranges can rightly be called simply apple. True, his taste is somewhat unusual - with a pleasant sourness, softer and more tender and at the same time somewhat tart. However, you yourself must determine how good the taste of a pie with apples and oranges. And for this you just need to choose a recipe and bake a cake. So go ahead - to the oven!

This pie is in many respects similar to the traditional"Charlotte" with apples. And it is prepared very simply, and it turns out very tender, as if melting. And such delicious taste is given to a pie, of course, oranges with apples. Ingredients:

Preparation: Eggs poured into a bowl, add sugar to them and grind them white. Now put a pinch of vanillin, a pinch of salt and sifted flour. We beat the resulting mass to a homogeneous state, and at the very end we put the sour cream and mix it well. In the baking dish, spread out the filling, visually dividing the bottom into two halves. For one part we lay apples, the other is filled with a layer of cut oranges. Gently pour the dough over top of the filling and put the mold in the oven. We bake a cake for about thirty minutes. 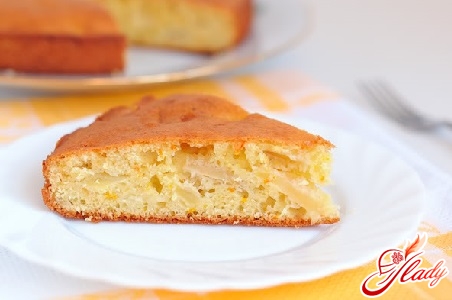 This pie turns out extraordinarily magnificent, that's why it was called "airy". Ingredients:

Preparation: Turn on the oven and let it warm up to 180 degrees. With the orange we remove the zest and squeeze the juice. Apples are peeled and cut into slices. And now make the dough. We break eggs into a bowl, mix them with granulated sugar and beat them into a white magnificent mass. Then add the melted and chilled butter to them and once again whisk thoroughly. Then pour in the orange juice, add the zest and mix. Then add the milk, mix again and, pouring the sifted flour, knead the dough. At the very end we put the baking powder, mix the dough to homogeneity and pour it into a baking dish, oiled and flour-poured. We put the slices of apples from the top of the dough, lightly stitching them in the dough. Sprinkle apples with brown sugar. The form is put in the oven and bake the cake for 40-50 minutes. The prepared pie is carefully extracted from the mold and transferred to a dish.

Recipes for pies-overturners are known to manymistresses. Bake them with almost any fruit or berry stuffing, and the dough in this case use a wide variety. Let's try to make such a pie from the ready puff pastry. And time will be saved, and a delicious dessert with apples and oranges will be cooked. Ingredients:

Preparation: We turn on the oven and leave it to warm up to 200 degrees. From the oranges squeeze out the juice and remove the zest. Apples are peeled off, peeled off the middle with seeds, and the flesh is cut into large slices. Now in the brazier we dissolve the butter, add the sugar and pour out a tablespoon of orange juice. Then we start boiling the oil-sugar mixture before caramelizing sugar. Determine that the caramel is ready, you can by the brown color of sugar. After that, pour the remaining orange juice, add the zest, stir and remove the brazier from the fire. We pour caramel into the metal form for baking and put in it slices of apples. Puff pastry is rolled into a round layer, the diameter of which should be two centimeters more than the diameter of the baking dish. Cover this layer of apples and turn its edges down. Put the form in the oven and bake the cake for 20-30 minutes. We remove the prepared pie from the oven, cover with a towel and cool it in the form for about 15 minutes. Then put the shape with the pie on the fire and give the caramels to warm up. As soon as the syrup starts to bubble, remove the form from the fire, cover it with a dish and gently turn it over. And now leave our cake to the full cooling. 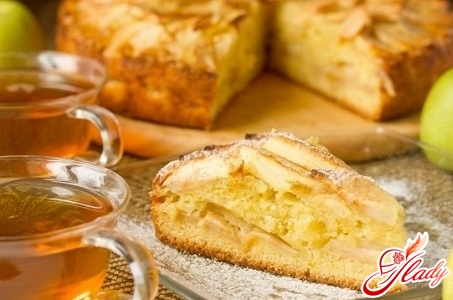 This pie turns out not just tasty, but also very beautiful. And it is prepared incredibly simply. By the way, such baking pleasantly diversifies your collection of apple pies. Ingredients:

Preparation: First you need to knead the dough. For this, we break eggs into a bowl, add soft butter and mixed with salt sifted flour. The dough is kneaded with hands until it becomes elastic and homogeneous. Now wrap the dough in a food film and put it in the refrigerator for an hour and a half. In the meantime, we clean the apples from the peel and a hard middle with seeds, and cut the flesh into slices. Fold the cut apples in a bowl, sprinkle with sugar and cinnamon, pour freshly squeezed orange juice and mix. We leave them to insist. Turn the oven on and heat it to 180 degrees. We lubricate the baking dish with oil. We take out the dough from the refrigerator, roll it out and put it in the mold, closing the sides. Superfine dough cut. Now put the apples on the dough (in a circle, overlap, several layers) and water them with the remaining juice in a bowl. We put the form in the oven and bake the cake for about half an hour. Then carefully remove it from the mold, cover with a towel and leave to cool. When our pirozhok completely cool, sprinkle it with powdered sugar, mixed with cinnamon.

Quite an unusual recipe for making a pie with apples and oranges. The fact is that apples for filling we will use in two different kinds. But first things first. Ingredients:

Preparation: To prepare the dough, we need to mix the sifted flour with sugar and butter. Must turn out flour flour. Now add water and knead the dough to an elastic state - in the finished form it should not stick to the hands. Then wrap it in a food film and remove it for two hours in the refrigerator. In the meantime, we are preparing the filling. With the orange we remove the zest and squeeze the juice. Three apples are laid aside, and the rest is cleaned, cut in half and remove the middle with seeds. Then add the cut apples in a saucepan, add a pinch of salt, freshly squeezed orange juice and zest. We put the saucepan on a slow fire and cook apples for about twenty minutes. After that, still hot apples mash in mashed potatoes, add butter, mix and cool. Turn on the oven and heat it to 250 degrees. Form for baking grease with butter and spread the dough into it. Now we knead it in a cake by the diameter of the mold and we puncture it in several places with a fork. We put the form in the oven and bake the cake for fifteen minutes. After that, take out the form, lay out on the cake a layer of apple puree, and on top put the freshly cut apples. Again, send the cake to the oven and leave it there for another ten minutes. Here so in different ways you can bake a pie with apples and oranges. Prepare with pleasure and pleasant appetite to you!

Bread rye in the oven: recipe

Carrot pie in the multivariate: recipe

Pancakes on yeast: the recipe is simple