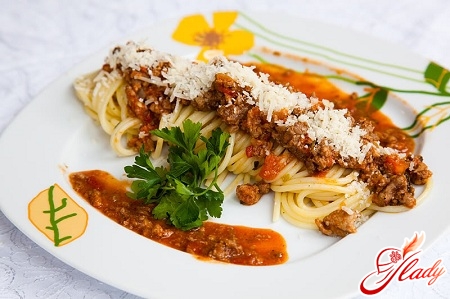 What is Italian pasta? In the usual sense for us it is pasta in any form. But we do not even suspect about the number of varieties of pasta. And how masterly Italians manage to prepare this prose product - in general beyond the reality (our reality). However, many pasta preparation recipes are not only widely known practically throughout the world, but also extremely popular. In particular, paste the Bolognese. What is Bolognese? This is a sauce invented by the Italians. But not just a sauce, but rather a rich and satisfying component, which is part of many recipes for pasta. We suggest to learn more about the sauce itself, as well as to get acquainted with some recipes of pasta cooked with it.

This kind of sauce comes from the Italian city of Bologna. By the way, it was the delegation of the culinary specialists of this city who recommended the recipe of this sauce in the Italian Academy of Cuisine. So this dish has an officially registered composition and a recipe for cooking. In the official version of the sauce, the recipe is limited to ingredients such as beef and pancetta (Italian bacon), carrots, onions and celery celery, tomato paste and cream (milk), red wine and meat broth. Of course, the Bolognese sauce is prepared not only from these ingredients. His recipe may include other ingredients, as well as exclude the products of the official version of the sauce. But interestingly, in Italy itself the Bolognese sauce is served mainly with classic tagliatelle pasta or with green (spinach-stained juice) lasagne. With other types of pasta, bolognese is rarely cooked, but sometimes served with mashed potatoes. In fact, the Bolognese sauce is quite democratic, and you can cook it not only with pasta, but with our usual rice and buckwheat. Because the meat sauce of Bolognese is very satisfying and is perceived by us not so much as a sauce, but more as an independent second course, supplemented with garnish. Nevertheless, the recipe for pasta with Bolognese sauce is firmly entrenched in our cooking. And the variations of this recipe are the same as the owners decided to try it. Will we try? 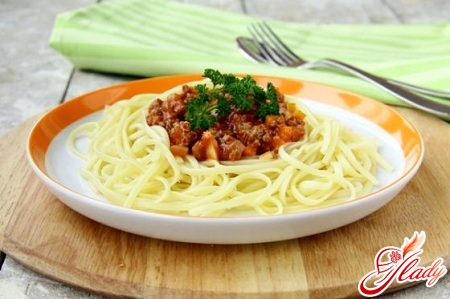 Spaghetti is the most common pasta for us. They are "native", that we even forget about their Italian origin, considering it our national product. And if you want to add Italian chic prosaic spaghetti, then this recipe is for you. Ingredients:

Preparation: First, prepare the vegetables: wash them, clean and finely chop. To prepare the Bolognese sauce, let's spread (over a large fire) in the saucepan cream and olive oil. When the oil is hissing, we will reduce the fire and put into the saucepan the sliced ​​carrots, onions, celery and garlic and, stirring, we will extinguish for about ten minutes. After that, we'll lay out the whole mince there, mix it and continue to fry another eight to ten minutes. Important! In the process of frying, care should be taken so that the mince does not stick together. Then add the milk to the stuffing and continue to stew for fifteen minutes. Further we pour wine into the saucepan and also extinguish, stirring, fifteen minutes. The next stage of preparation is the addition of tomatoes and tomato paste. Tomatoes without peel are crushed in a blender (or just kneaded with a fork), mixed with tomato paste and poured into a saucepan. Then we add a mixture of Italian herbs, half a teaspoon of salt and a few pinch of black pepper. We put the stewpan on the smallest fire, cover it with a lid and leave it for a couple of hours. Important! Prepare the sauce for at least two hours (it can be longer), but you need to mix it every twenty minutes. Then we just have to boil spaghetti and serve them, watering the Bolognese sauce and sprinkling with grated Parmesan cheese.

Pasta with a liquid bolognese sauce

In fact, the traditional bolognese sauce is thick. However, this sauce is most like a sauce, not a goulash. A simple recipe is simple enough to make a sauce quickly. Ingredients:

Preparation: We will prepare this sauce the same way as the previous recipe recommends. Therefore, first we will wash, clean and finely chop all the vegetables, and then fry them in a saucepan with vegetable oil. When the onion starts to turn golden, add the bacon cut into small pieces, and after five minutes put it in the saucepan and stuffing. Constantly stirring the sauce, continue to simmer for ten minutes. After that, put tomato paste in the sauce, stir, wait, when the sauce boils, and pour in the milk. After extinguishing all together for five minutes, add wine, seasonings and continue to cook with the lid open for five more minutes. Then we reduce the fire, cover the saucepan with a lid and leave it for ten minutes. That's all. Quick Bolognese sauce is ready. Now boil the pasta, water them with sauce and serve, sprinkled with cheese chips. 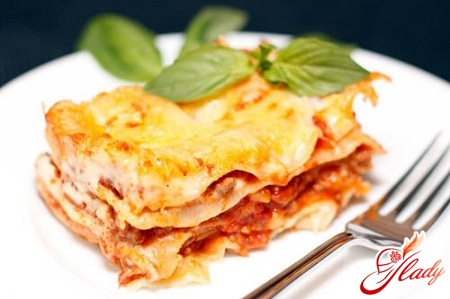 Lasagna is also pasta, and also the kindItalian dishes. The most famous recipe of this dish is lasagna bolognese, which includes not only the eponymous sauce, but also bechamel sauce. Cooking a lasagna at home is a very feasible undertaking, especially since the recipe for its preparation is not so complicated. Ingredients:

Preparation: First we will prepare the bechamel sauce. To do this, let us dissolve the butter in a saucepan, add flour to it, and mix the oil and flour mixture with a whisk, and pour the milk with a thin stream. Continue to cook the sauce until it thickens, and then take it off the fire and let it cool down. Now comes the turn of the Bolognese sauce. For him, we first fry the minced meat on vegetable oil, add the chopped onion and continue to cook until the onion becomes transparent. Next, put spice and tomato flesh in the sauce, wait until the sauce boils, and cook it for about five minutes. While the sauce is brewed, crush hard cheese and mozzarella on the river, prepare lasagna sheets. They must first be boiled, and how to do it is written on the package. Therefore, strictly follow the recommendations. Next, take the shape (preferably rectangular) and pour it on the bottom of the bechamel sauce, and then put the first layer of lasagna sheets, which we spread on top with bolognese sauce, sprinkle with cheese and pour over the sauce bechamel. Again we put lasagna, bolognese, cheese and beshamel. And thus we lay two more layers (only four). From above cover all the sheets of lasagna, sprinkle with the remaining cheese and douse the bechamel sauce densely. We send the form with lasagne in a hot oven and bake for half an hour. Choose a recipe for the Bolognese pasta and join the amazing cuisine of sunny Italy. And let the preparation of Italian pasta be a pleasant process for you. Good luck! We advise you to read:

How to cook pasta in Italian: we master the traditional dish of Italy

How to cook pasta and sauces to it