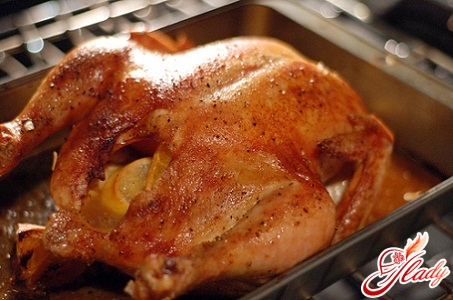 Fried chicken is a win-win option forany table: tasty, beautiful, not very difficult. We will not make a mistake against the truth, if we say that one of the most popular dishes in this category is the famous chicken of tobacco. Probably, many were wondering what the concept of "tobacco" means, but not everyone got to the truth. So to tobacco, this certainly has nothing to do with, but the name originates from the Georgian origin of this wonderful dish. Such chickens were prepared in special pans with heavy lids, which were called tapas. In the Russian language, the word was distorted to the familiar "tobacco". This is the story, and now the answer to the question of how to make a chicken of tobacco in the oven in Russian or in a frying pan in Georgian. Ideally, of course, you need a special frying pan, but in the absence of one you can use the usual one.

Chicken of tobacco in the oven

Cooking method: Carcass chicken washed, dried, cut through the sternum and spread out. Cut off the costal bones from the spine. The bird should be carefully discouraged, trying not to damage the skin, so that the meat departs from the bones. A metal hammer is not suitable here, it is better to use some flat object, for example, a scapula, which you turn the cutlets. Mix salt, pepper, adzhika, chopped garlic. The resulting spicy mixture thoroughly lubricate the chicken from all sides and leave to marinate for several hours. To heat chicken fat, cracklings to clean. If there is no chicken fat, heat the vegetable oil in the frying pan (preferably olive oil), add a little butter and fry the bird on both sides until a crust is formed. Cover with a suitable flat lid, lay the load on it and send the frying pan to the oven, heated to 180 degrees. Bring the dish until done. You can check it by puncturing the carcass in the thickest place - if a clear juice is allocated, the chicken is ready. Serve with fried potatoes and a salad of fresh or baked vegetables. 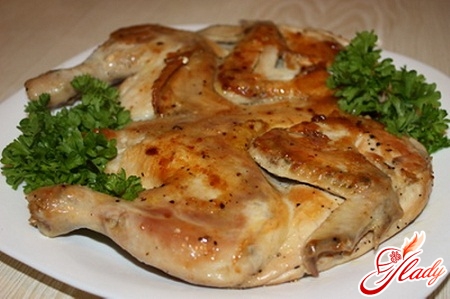 Chicken of tobacco in a frying pan

Ingredients - see the previous recipe. Method of preparation: Put the marinated carcass in a frying pan with preheated fat (see the previous recipe), cover with a flat lid with a load and fry until a ruddy crust is formed. Then turn over and fry the other side. It is important to choose the right temperature regime and turn the chicken in time so that it is roasted evenly and does not burn. In other words, the dish should be kept under supervision all the time, and it must be removed from the fire in time. If you follow all these recommendations, then you will get a real chicken of tobacco - fragrant, ruddy, juicy and very tasty. 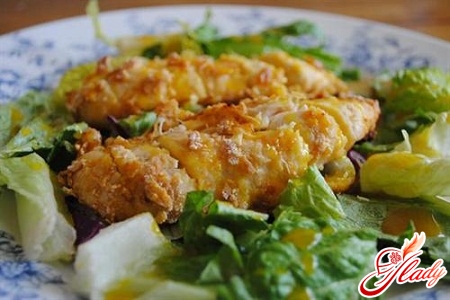 Cooking method: Prepared chicken carcass cut into portions. Each grate with salt and pepper and fry in a mixture of olive oil and butter until golden brown. Transfer to a clay pot or clay mold for baking. On the fat in the frying pan, fry the herbs and garlic, pour the sour cream and about 100 milliliters of hot water or hot vegetable broth. To warm, not leading up to a boil, salt to taste. Pour the chicken pieces with the sauce and put into a preheated oven. Cook at a temperature of 180 degrees 30-35 minutes.

Preparation: Mushrooms and cleaned. Prepared chicken carcass cut into several parts, salt, pepper and fry in olive oil. Fold in a suitable dish fried chicken pieces, chopped mushrooms and simmer under the lid on a small fire for about 15 minutes. Balance the taste by adding salt, pepper, lemon juice, and bring the dish until cooked in the oven. Before serving, sprinkle with parsley. Note: You can use frozen white mushrooms or fresh champignons. 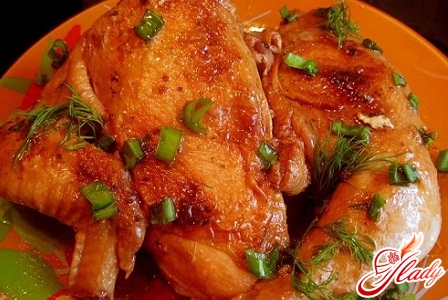 Cooking method: Prepared carcass chicken cut into several parts, grate each piece with salt and pepper and fry in butter. Fold the meat in a suitable dish and fry in the same frying pan finely chopped white roots, leeks, bay leaves, add Provencal herbs and pour in the wine. Boil to make the sauce slightly evaporated, and pour the meat. Bring to a boil under a lid and put in a preheated oven for 180 degrees for 30-40 minutes. There are many recipes for how to cook a chicken in the oven. We tried to find the best options for you. Bon Appetit! We advise you to read:

How to make an omelette: lessons for beginners and ideas for experienced housewives