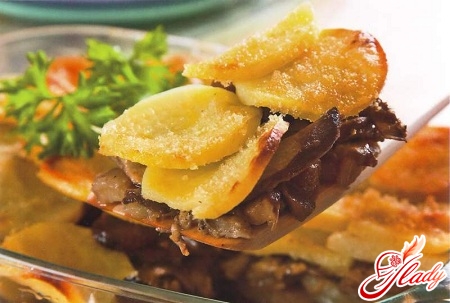 Potato casserole with mushrooms is a dish oneveryday. It is nourishing, easy to prepare and does not require special skills from the cook. You just have to cut the food, put them in a mold and try not to burn them in the oven. After completing all this, you can enjoy the dish, watering it with sour cream or mayonnaise. If you are bored with borscht, soups and mashed potatoes with cutlets, we suggest taking note of at least one recipe and making a mouth-watering roast pudding from potatoes and mushrooms.

If you first decided to cook potatocasserole, we recommend starting with the simplest - for this recipe is quite suitable. We used fresh champignons, but you can take any mushrooms: chanterelles or honey agarics, frozen or dried, and so on. It should be borne in mind that the latter must be prepared in advance, otherwise they will be firm, inconsistent and tasteless. There are two ways; Here's the first: fill the dried mushrooms with cold water, leave to infuse and after three hours, draining the liquid, fry in vegetable oil. If you want to save time, you can choose the second option: boil the product in salted water and braise it in a sauté pan, seasoning with spices and ground pepper. So, back to the potato casserole, which promises to be incredibly appetizing. Ingredients:

Cooking method: This recipe dishes can be implemented in two ways. In the first case, cut the peeled potatoes with not too thin mugs. To ensure that it is not too hard and afterwards is well baked, boil the salted water and cook it exactly five minutes after boiling. Then, after draining the liquid, allow it to drain and put it on the bottom of the prepared for this form. Preparation of the dish in the second way takes a little longer, but the casserole turns out softer and much tastier. To do this, you need to make a mash. Let's take a closer look at this recipe. So, put the potatoes on, before adding a little water. Many culinary experts recommend not to clean the vegetable, since then starch remains in it, thanks to which the puree turns viscous and the casserole keeps the shape perfectly. When everything is ready, remove the skins from the potatoes, add butter and rastolkite in mashed potatoes. If the mass is too thick, dilute it with a small amount of liquid in which the vegetable was cooked. To get rid of lumps and get a perfectly homogeneous lush mixture, use a blender if possible. Now we turn to the preparation of the filling: boil the mushrooms for half an hour, then cut them into mugs, and the peeled onions are half-rings. Both ingredients fry in a saucepan with preheated oil, seasoned with spices and salt. The casserole is laid out layer by layer in any shape - a frying pan, ceramic, glass or clay ware, greased with sunflower oil. The "floors" of the dish are formed as follows: half a mildly cooled puree, onion-mushroom filling, the remaining potatoes. At the top, the dish is poured with a mixture of sour cream and grated cheese. Now warm up the oven to 200 degrees and put your masterpiece into it. Beat about thirty minutes and after this time you can take out an aromatic golden casserole. Bon Appetit! 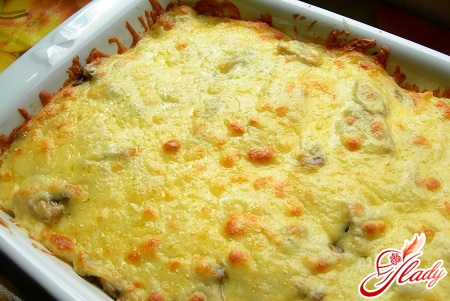 Someone is fasting on the strength of religious beliefs, welland someone has to do it for health reasons. But even a fresh and seemingly tasteless food can be appetizing. Prepare a potato casserole with tomatoes and fresh mushrooms using this recipe, and you'll see for yourself. Ingredients:

Cooking method: First of all, peel potatoes from the peel, put it in a saucepan, pour it with water, lightly add it to it, and cook until ready. After drain the liquid, leaving about half a cup, and rastolkite the vegetable in a puree. Take care that there are no lumps and the mass is lush and uniform; dilute it with a small amount of potato broth. If you have a blender, mash it and shake it a few times. Now cut the washed mushrooms in large mugs and fry in olive oil. When they slightly darken and allocate the juice, enter the diced onions, if desired, pepper and salt. Now the finished mixture is crushed with a meat grinder or again a blender. Turn on the oven and heat it to 180 degrees. In the meantime, slightly lubricate the inner edges of the mold in which you will prepare the dish, and start spreading the products. The first layer consists of mashed potatoes (take a little less than half), then comes the onion-mushroom mixture. Now comes the turn of rings cut by rings, which will need to be sprinkled with chopped parsley. At the very end, put the remaining potatoes. The top of the product carefully grease with lean mayonnaise and bake for no longer than 40 minutes. 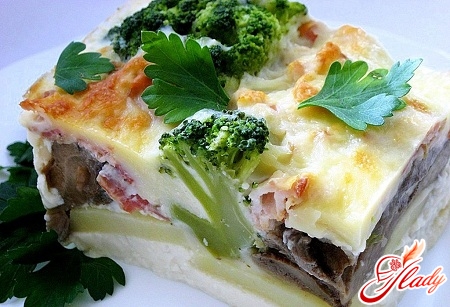 Casserole with feta cheese and mushrooms

Finally, we offer another easy recipe for a juicy, appetizing potato casserole, which consists of two types of cheese and mushrooms. Ingredients:

Cooking method: The very first thing to do is boil the peeled potatoes. Then mash it with a crush, adding a little warmed milk and butter. Some lay an egg, but this is not necessary, especially since one can never be sure of its quality. While the mashed potatoes, cut the mushrooms and onions into cubes and mix them in a saucepan, add salt, spices, vegetable oil and fry until golden. Fresh fennel with knife as small as possible. Now it remains to collect your creation - to do this, oil the form with butter and start spreading such layers: a little mashed potatoes, sprinkled with herbs, grated cheese, dill, fried mushrooms with onions, again cheese, potatoes. On top of the product lay out a small slice of frozen butter. Put the dishes in the oven and keep it there for about half an hour. The most suitable temperature for baking is 180 degrees. Each recipe is good in its own way, so before choosing the right one for you, you will have to cook the casserole more than once. If the dish does not hold well and breaks up, try not to cook the peeled potatoes, but "in uniform" - starch remains in it, which does not allow the dish to fall apart. In addition, you can try another option: instead of frying onions, cut it into half rings and marinate in cold water, adding sugar and table vinegar. We advise you to read: