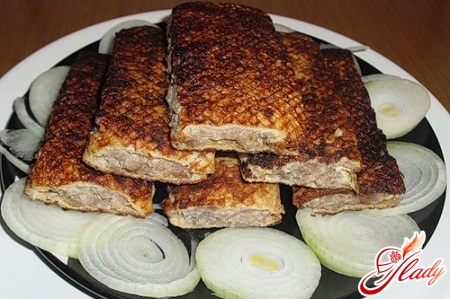 If you want to cook an ordinary dish inan unusual option, then try to make cutlets in waffles. This, firstly, is really unusual, secondly, it is original, and thirdly, it is fast and tasty. In addition, such a dish will appeal even to children who eat ordinary cutlets without much pleasure. We offer you several recipes for these unusual cutlets.

Cutlets in waffles and battered

Preparation: We twist meat and onions into a meat grinder, add salt, spices and a tablespoon of mayonnaise. We knead the stuffing and let it stand a little. Wafers cut into the shape and size of future cutlets and make a dessert. To do this, mix mayonnaise with flour and eggs, salt and whisk. We preheat the vegetable oil in a frying pan, which we pour not very much, as the claret and waffles absorb the oil well. Now take the wafer billet, put minced meat on it, smear it on the surface and dip the billet into the batter. We spread cutlets on a pan with waffles up and fry first on one side, and then on the other. Dipping cutlets in the batter, let the liquid drain a little, otherwise it will spread in the frying pan, and the upper wafer layer will quickly become dehydrated. Toast fried on medium fire, bring to the preparedness under the closed lid, reducing fire. You can do otherwise. Quickly fry the cutlets on one side, and then turn them over and cover the frying pan with a lid. Then cutlets turn out magnificent. 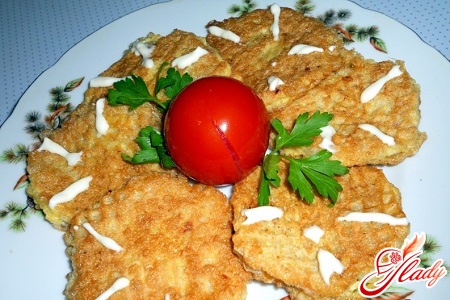 Two-layer wafer burgers with a meat filling - this is also the original version of cutlets. Ingredients:

Preparation: We clean and finely shinkuyu bulb, cheese chop into cheese chips with a grater. Mix the onions and cheese with chicken forcemeat, add salt and black ground pepper to taste. For batter, beat eggs with mayonnaise, add flour to them and mix the batter. On the wafer billet we spread chicken mince, cover it with the second wafer, dip it into dough and place it in a frying pan with red-hot vegetable oil. Fry like the usual cutlets - first on one side, and then on the other. 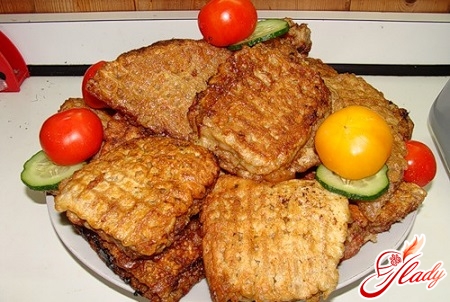 These wafer cutlets are soft and juicy inside, but crispy on the outside. Ingredients:

Preparation: Waffle cakes are smeared with a brush dipped in warm water, on both sides. This is necessary for the wafers to become soft, since we will have to turn them off. Then we clean and finely chop the onion, add it to the mince, put the same pepper and salt in it and thoroughly mix everything. On the wafer cakes we spread a thin layer of minced meat (we put it on the smooth side of the cake). Then we spread out the filling and fold the wafers into rolls, which are cut into pieces with a thickness of about three centimeters. Eggs are broken into a bowl and beat them with salt with a whisk or a normal fork. We heat the vegetable oil in the brazier. Chopped cutlets from the wafers are dipped in beaten eggs, and then rolled in breadcrumbs. Fry like regular patties - over medium heat, alternately browning each side. That's so interesting you can cook ordinary cutlets in an unusual way. Agree that the simplest ingredients are the original dish - cutlets in waffles. Such wafer cutlets are usually served without a hearty garnish. Claret and waffles successfully replace the usual pasta, potatoes or cereals. Garnish these patties can be a vegetable salad, and you can serve as a dish or snack. Cook with pleasure, and a pleasant appetite for you. We advise you to read:

Pilaf with chicken in the multivariate: recipe