Turkey has long been considered the best anda useful kind of dietary bird meat. They breed turkeys in many countries, including ours. Therefore, the useful and harmful properties of turkey meat have long been studied by many specialists.

The turkey is a fairly large poultry offamily pheasant. Its homeland is America. Still the Aztecs used turkey, it was their only poultry. In the XVI century, these birds were brought to Spain, and after a while they began to breed in England, in France and throughout Europe. Turkeys are considered the largest poultry. Their live weight reaches: in males - up to 35 kg, in females - up to 11 kg. These birds have a wide tail and strong long legs. On the head and neck they have specific skin formations in the form of corals, and in males from the upper part of the beak a fleshy appendage hangs which, when the bird is excited, reaches 12-15 cm. The plumage of turkeys is bronze, white and black, depending on the breed and varieties. Turkey in the modern society is considered a very valuable type of meat and is second only to consumption after chicken. Very high quality turkey meat has in the US, much higher than in any other country. In our country, mostly breed such breeds as North Caucasian white, North Caucasian bronze, black Tikhoretsky, white Moscow, pale and white broad-chested. 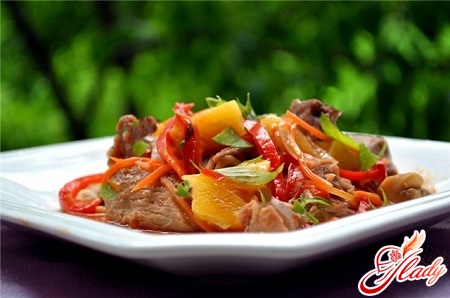 Turkey is very widespread incooking. Turkey - very delicate and low-fat meat, which does not require special culinary skills. Many dishes are prepared from it: it is fried, boiled, stewed, baked and added to salads. The breast of turkey meat is stuffed with vegetables, fruits, mushrooms, nuts. In many European countries, a stuffed Christmas turkey, baked entirely for Thanksgiving, is quite popular. From this kind of meat prepare escalopes, which marinate in oil, lemon juice and spices. It's like a turkey shish kebab, for which the breast and thighs fit. For those who do not like the smell of fried turkey, it is recommended to cook boiled or fresh vegetables or nutmeg before cooking it. On the garnish very well suited boiled young potatoes, boiled rice, French fries, boiled or fresh vegetables. Serve turkey with white dry wine. In our country this bird is not very common, as it is thermophilic. However, despite this, this meat is sold in many grocery stores both frozen and fresh. 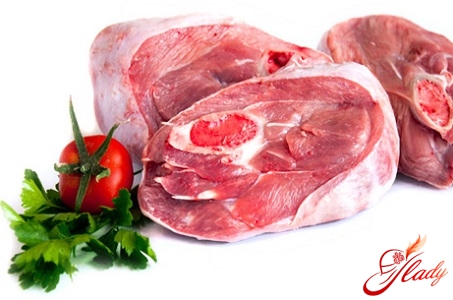 Benefits and harm of turkey

Turkey meat is very useful, as it hasdietary properties. This bird is bred in many countries, and therefore its benefits and harm have long been studied and proved by specialists. The benefit of turkey meat is that it contains a lot of vitamins A and E. It has very low cholesterol content, which makes it very easy to digest in the human body. The turkey contains a large number of microelements: calcium, iron, potassium and so on. The huge benefit of a turkey is the protein content, which is very necessary for the human body. This meat contains much more sodium than in veal and beef. Useful properties of sodium, contained in the turkey, are that it promotes an increase in plasma in the blood and provides a normal metabolic process in the body. Still turkey meat is useful in that the fat content level in it is moderate and promotes the normal assimilation of an element such as calcium, which plays a very important role in the formation of bone tissue. For this reason, this type of meat is recommended for prevention of various diseases. For a long time, nutritionists discuss the benefits and harm of turkey, each time proving that it contains more iron than beef or chicken. Many doctors prescribe a turkey patient with anemia. Also there is an opinion that turkey meat is able to prevent the appearance of cancer. It is recommended to add a turkey to your diet:

The turkey meat contains phosphorus, which in itthe same as in the fish. It is also rich in vitamins A, B2, B12, PP, B6, calcium, potassium, magnesium, iodine, selenium, manganese and sulfur. Turkey meat has almost no contraindications. It can be harmful only if it is stale or substandard. Therefore, when choosing meat, you need to be careful to get the most benefit, not harm. Summarizing, it can be argued that the turkey has almost no harmful properties. However, it should be remembered that for people suffering from kidney disease or gout, the turkey will not be of use, since it contains a large amount of protein. Such patients need to limit the use of this meat. Still because of a considerable quantity of sodium to hypertonics it is recommended to not dosalivat a turkey in the course of preparation. Otherwise, the harmful properties of a turkey outweigh its dignity. It is worth noting that the liver of a turkey can harm those who suffer from kidney failure or gout. 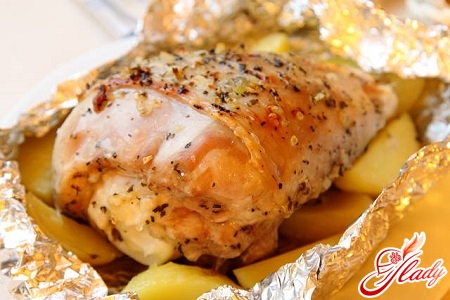 If you decide to buy turkey meat, you need to decide how you want to buy it, frozen or fresh. Today in supermarkets there is a wide choice:

When choosing this kind of meat, it is necessary to drawattention to the carcass, which should be well-nourished, fleshy, legs and breast should be thick. The skin of the carcass should be light, with a yellowish tint, moist and without spots. If you want your turkey to be the most delicious, you need to determine its freshness by tapping your finger on the carcass: if the dent immediately recovers, the meat is fresh, and if it does not, you should not buy it. Keep fresh turkey meat in a refrigerator in a plastic bag, only if you are going to prepare it soon. For a long time you can not store a turkey, not more than a day. If you defrost the meat, it should be prepared immediately, since at room temperature the microbes begin to multiply rapidly in it and when they are frozen again they will remain there. There are a lot of recipes for cooking turkey. It is fried, baked, boiled, stewed and smoked. Also cook this meat for a couple. Very tasty from this type of meat are cutlets, canned food, pâtés and sausages. Very often turkey included in the diet of baby food. Each country uses its own methods of cooking dishes from turkey meat. So, for example, in the UK they are preparing a turkey stuffed with berries and mushrooms. In France, the carcass of turkey is stuffed with truffles, mushrooms and rosemary, and before serving, the prepared dish is poured with cream sauce. Italians stuff a turkey with oranges. The turkey eggs are very useful, and the feathers with feathers of this bird are used for making clothes and stuffing pillows and blankets. Time to prepare this kind of meat in the oven takes a lot. When cooking it, you need to preheat the oven to 200 degrees and bake the turkey for about 3 hours. But turkey is not cooked for long. To do this, it is necessary to put it in cold water and cook for half an hour. If the second course is prepared, the meat can be put in boiling water and boiled for about an hour and a half. When the foam is formed, it needs to be removed. It should be noted that during cooking, the bird decreases and loses up to 30% of the liquid. If you are going to fry a turkey, then it must be salted from all sides and, if desired, rubbed with garlic and black pepper. In order for the meat to turn out juicier, it should be smeared with sour cream and during the time of frying from time to time, water the fat formed during the frying process. The time it takes about 2 hours. For it to be fried, it needs to be turned over. The willingness of a turkey can be determined by puncturing it. If clear juice is allocated, we can assume that the meat is ready.

Diet Protasova: recipes of dishes that will help to lose weight and cleanse the body

Is the diet of Xenia Borodina effective?

Cucumber diet for rapid weight loss: what is its effectiveness