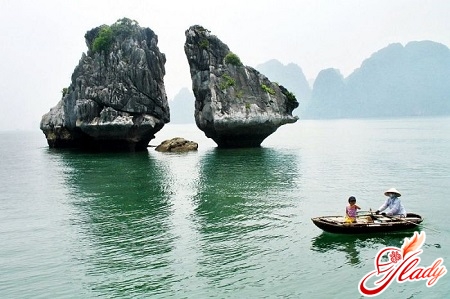 If Vietnam were a little closer to Russia,As, for example, Turkey, the flow of tourists would be endless. This country does not have any minus as a resting place, except for a long flight. Everything else - the sights of Vietnam, service, low prices and a lot of beaches - one has to like even the most choosy tourist. Many do not value Vietnam in the best way because of their prejudices associated with memories of huge bales of rubbish, fried herring and other extravagant features of this country, but this has nothing to do with rest in Vietnam. Because of the wrong point of view, you can lose the opportunity to observe the incredible sights of Vietnam, as well as enjoy diving, healthy and tasty food and much more. This article will describe in detail the most important and popular places, which must be visited, when you are in this wonderful country. 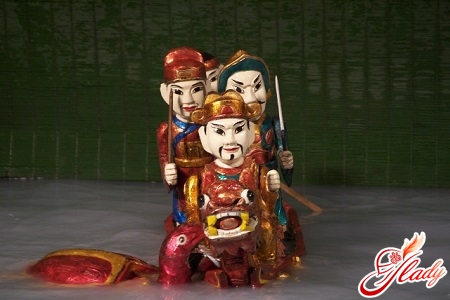 Halong Bay or beauty on the brink of fiction

To describe Halong Bay in a few words is simpleit is impossible, because his majestic beauty can not be described. But if your imagination is sufficiently developed, then try to imagine a huge number of green islets that rise from the waters of emerald color. Nevertheless, you can hardly understand the feeling of the person who first saw something like this. You need to come here on your own to remember this moment for the rest of your life. Halong can be compared to a work of art. This is something ideal and created with the help of the hands of nature itself, and not at all human. So, if you decided to start your acquaintance with Vietnam from this place, it will be useful to learn more about it. you can act like almost all other tourists who went on a cruise along the bay, that is. to get acquainted with the caves or go on a walk in the local park of the island of Katba. On the other hand, if you do not want to go immediately to investigate, you can pay tribute to your laziness and lie on the sand, taking advantage of the many beaches that are scattered throughout the island of Katba. Halong is famous not only for its stunning beauty, but also for the many myths that go around it. Vietnamese are very respectful of their traditions and heritage, so this bay is considered a very important place, and its name can be translated as "the place where the dragon descended into the sea". One of the mandatory destinations through which you will pass on the way to the bay, is the eponymous city. This city is not liked by tourists. investors are slow to develop its infrastructure. Many roll their eyes and claim that compared to the paradise bay and its islands, the town can be compared to a real hell, but all this will not stop curious tourists, tk. despite such a negative reaction of the majority, the city is preserved in a virtually primordial form and can become a source of many knowledge. Halong can be called the main attraction of the north-east of the country, and therefore the lack of tourists, he does not suffer. Nevertheless, from February to April, it is not necessary to go to this bay, t. the weather leaves much to be desired. This whole time period will be accompanied by strong wind and fine drizzling rain, which greatly limits visibility. It has already been said that the name of the bay has a connection with the dragon, who allegedly descended into the sea at this place. There is a legend about this, which says that the islands were created with the help of a huge dragon who lived nearby. One day the dragon decided to get out of the shelter in the mountains, but on the way he tore down a lot of rocks with his tail and crushed them until finally he could land in the sea that flooded the island, and the green islets are the tops of the rocks that rose high into the sky before Halong was flooded. By the way, about dragons. Their images often appear as backgrounds or images for small souvenirs, which local people like to trade. In the course and all the beautiful stones found in the caves. How to get to Halong? You can simply join a group of tourists to literally drive you to the very end of the route and show all the interesting things, and you can manage yourself, which will be much more expensive. For some reason, some tourists like to go to the bay on their own. To do this, go to the city of Halong from Hanoi and book a boat or place in a boat to the island of Katba. The boat will take you to the main attractions and land in the Bay of Ben Beo. Finally, you can try to look for a helicopter ride service over the bay. It will cost about 200 dollars. Vietnamese puppet theater on the water

Puppet theater is quite popular aroundpeace, but in Vietnam it has a unique feature. The fact is that all the action takes place on the water, this enables Vietnamese puppeteers to realize a lot of bold ideas. This is a unique way of displaying reality using dolls. Puppet theater on the water has existed for more than 1000 years, but the Vietnamese have managed to cool down to it. Nevertheless, the puppet theater in Vietnam stands on the first place among all theatrical genres. On the monument Sung Thien Zien Lin written 4036 words, which detail the origin of the puppet theater, its inception in Vietnam. Key roles at that time were performed by fairies and a gold tortoise. By the way, despite such a serious period, which has already passed, in many performances, you can still see the same turtle, and those same fairies. One of the most famous cases, when a puppet theater on the water showed itself in other countries, is a 1984 tour. It was attended by 15 people, and they were able to tour several large countries, among which were the Netherlands, Germany, France, etc. Wherever they turned out, everywhere they were received with enthusiasm, and critics claimed that this puppet theater was a tremendous tribute to the cultural heritage, which has already begun to be forgotten. The scenery of the theater, which is always performed in the form of a communal house, is installed directly in an artificial or natural pond. The action takes place there, and the puppeteers stand behind the screen, almost waist-deep in the water. All this is emphasized by the unusual nature of what is happening and creates an amazing and unusual atmosphere for the viewer. One of the features of this theater is the presence of many monologues. The main character for 1000 years is the doll-boy Teu. He is clever and clever, a wonderful joker, adores different games. Despite his age, he becomes the center in any incident and sharply criticizes what is happening. During the performance, he shows his respect for kindness, censures low-lying feelings and qualities, but praises simple and wise truths. Every time a new performance begins, he appears in front of the audience in a loincloth and begins with the same phrase, which he welcomes the viewer and denies the need to present his person. The basis of the plot of the performances are ordinary Vietnamese everyday life, which are devoted to work in the field, and also talk about the pursuit of cattle and fishing. But that's not all, because in the performances often appear folk festivals and festivals, where you can admire the symbols of Vietnamese mythology. There will be dolls of turtles, dragons, phoenixes and unicorns. Ever since the Vietnamese have long believed that all these mythical creatures crave a simple earthly life, just like an ordinary person. Well, the most amazing and fascinating action is a fairy dance. Puppet theater on the water is the basis of Vietnamese culture. He is considered the center of all the theatrical activities of this wonderful country. By the way, the puppeteers for many years of practice developed a lot of professional secrets, like explosions of petards under the water or puppet acrobatic stunts.

Tunnels of Ku-Chi and heroism of local residents

The whole of South Vietnam was the center of the partisanopposition during the American-Vietnamese war. This also applies to the Ku-Chi region, where tunnels, spreading over a distance of 187 km along the land, became the main attraction. They dug for 15 years, at a time when the American infantrymen did not suspect anything on the surface. The village of Ku-Chi, whose name is associated with rubber, could continue to be the most common settlement used by US soldiers to conduct military operations. But thanks to the heroic actions of the local residents and their diligence, the village became famous for many years. A whole chain of tunnels was dug, having a huge number of branches, which were used as living quarters, hospitals, kitchens, etc. The main tunnel is quite amazing. it is not only huge, but also laid out by brick in several rows, which made it extremely durable and allows to withstand artillery shelling or explosion of a powerful bomb. The rosy American soldiers still found out about these tunnels, but because of their physiological structure they had difficulty moving around them, and somebody could not get inside at all. Those who could penetrate the tunnels were expecting an unenviable fate, for they were met with many cunning traps. But all this is past days, and now tunnels are used as one of the attractions for foreign tourists who can personally get to know the life and life of the Vietnamese partisan. In the museum in the village you can see a film that will tell you about many interesting facts of those times, as well as about the heroism of people. Among them, a schoolgirl girl, on the account of which several hundred dead soldiers, as well as local masters who independently sawed unexploded ordnance to make a bomb out of them. And after the museum you can go to the military training ground to shoot from the real AK-47. Next, your path lies in the forest, where the local guide once again jokes tourists, offering to find the entrance to the tunnel yourself. He jokes so not for the first year already and this joke does not cease to be actual, tk. the entrance is almost impossible to find. Further, when he gets tired of watching the futile attempts to search, he will show the climb, which not every man can squeeze into. Do not be afraid to get stuck or stay on the surface; some lazes have been specially extended for tourists, which means that anyone can creep in tunnels in pitch darkness and lose track of time.

Places of interest in Palma de Mallorca: rest for every taste

Sights of London: history and modernity

Tours in Italy in Milazzo