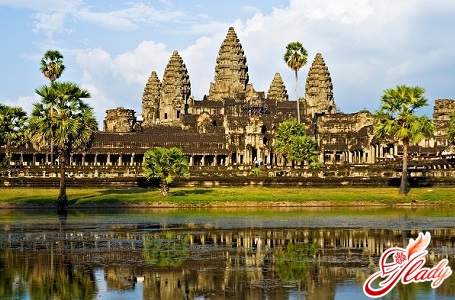 When visiting Cambodia for the first time, a person is capable ofbe confused by the abundance of attractions. Therefore, it is recommended to make a list in advance, which will include places of special interest for a tourist who wants to get acquainted with the culture of an exotic country. This list must include: 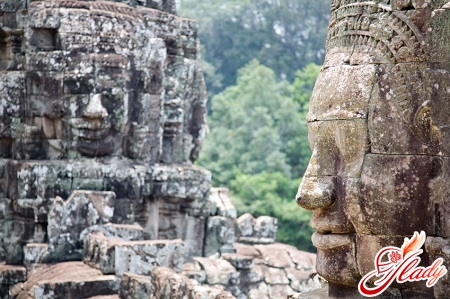 Over the centuries, ancient temples,located on the territory of Cambodia, remain a mystery for both visitors to the complexes, and for the people of science. How did you manage to build fabulously beautiful buildings in the middle of the jungle? Of particular interest is Angkor, built in the past as an urban settlement. At present, there is no trace left of the residential buildings. Houses were built of wood, which could not stand the test of time. But still tourists have the opportunity to appreciate such attractions of Angkor as the temples of the Small and the Great Circle, as well as Angkor Wat. Stone churches successfully resisted bad weather and time and still represent a cultural and scientific value. The Small Circle of Angkor includes the most famous temples erected during the Khmer empire, its undoubted flourishing. Although the buildings belong to different times, they are united by an original performance and undoubted beauty. If the pyramids of Egypt are the most magnificent religious buildings, then the temples of the Small Circle are one of the most beautiful. Among them, the real gem is Angkor Wat, the largest temple in the world. The complex has three levels, however only two are open to visit. The first level acquaints with graceful bas-reliefs, and on the third there is a closed Buddhist temple, in which tourists with open knees and shoulders are not allowed. It is recommended to visit the temple at dawn, at which time the complex looks most attractive. The Bayon temple contains more than fifty towers, each depicting the four faces of the Buddha. Also the complex is of interest as a rare attraction with bas-reliefs dedicated to the everyday life of the Khmer. This temple should be visited on a full moon, when the light of the moon gives the walls a milky glow. The elephant's terrace once served as a platform used for ceremonies of national importance. It is considered, for example, that it was here that the emperor inspected an army built at the foot of a peculiar tribune and consisting of elephants. No less interesting is the terrace of the leper king, decorated with graceful carvings. In this place cremation of ancient rulers took place. A mountain temple built of sandstone, the Royal Palace, part of the Great Circle of Preah Khan and Preah Neak Poan, an island structure located in the center of a lake created from four pooled reservoirs - these are undoubtedly the majestic and unique monuments of the past. 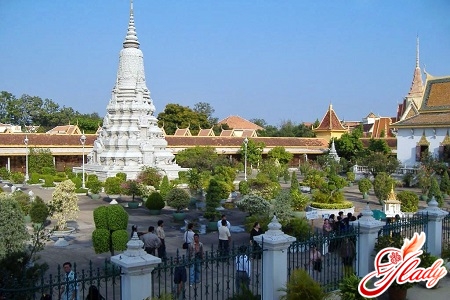 Wishing to preserve the inviolability of the forestCambodia, the authorities announced the creation of several nature conservation zones and national parks. As a result, there are 23 national parks in the territory of Cambodia, among which Park Phnom-Bokor, Ream, Virchai stand out. Phnom-Bokor has earned notoriety not only for the most beautiful national park of Southeast Asia, but also for the most mysterious. Located in the Elephant Mountains, the park attracts tourists with virgin jungles, as well as the opportunity to admire the herd of wild elephants nearby. At the top point is the pagoda, which is visited relatively rarely because of the difficult path. On the territory of the park, an inquisitive tourist will discover many small lakes and large waterfalls, an abandoned casino built in those days when Cambodia was a French colony, an uninhabited French town of the 18th century, an old church and other sights. Underwater reefs and picturesque beaches, mangrove forests and two charming islands - all this is the Ream National Park, known as Pre Sihanouk. Among the merits of the park can be noted hundreds of species of birds, quite unusual for a European resident, freshwater dolphins, often appear in the coastal waters, and, of course, many funny monkeys. If it is interesting to get acquainted with the life of a simple Cambodian family, you can make a boat trip along Prek Tuk Sap, a river over which they build their houses on stilts. Virchai is the largest national park in the territory of Cambodia. This is the northern region of the country, inhabited by gaurs, tigers, elephants, loris, macaques and many other species of fauna. In addition, small peoples live in this region, whose lives are of some interest to ethnographers and tourists. The park has an excellent observation. Here you can go to a small or, on the contrary, a fairly long tour, allowing you to fully familiarize yourself with the culture and sights of Cambodia.

If a person has sufficiently appreciatedthe attractiveness of cultural buildings and pristine nature, he likes entertainment, which in Cambodia abound. For example, you can visit the amusement park I-Ball, specially created for young tourists who are not afraid to show a little extravagance. One of the curiosities of the park is skiing in the plastic sphere from the hill. This is a real chance to feel the feelings of underwear during washing. Phnom Penh can rightfully be called the center of night life. Around the 21st hour, numerous beer bars and clubs are opened, which are visited by both tourists and locals. There are also special nightclubs for men with female attendants, live music and the opportunity to see Khmer dances. Tired of nightly entertainment, tourists again go to travel around a small, but incredibly rich in surprise country. If there is a desire to indulge in romance, it is worth visiting Sihanoukville, an island with hotels in the form of a bungalow. The show "Apsara" will be interesting for connoisseurs of Khmerian dances. The performance is accompanied by drums. Lovers of ancient buildings will benefit from a ride east of the Temple complex Tommanon. Just two hundred kilometers from it is the bridge of Span Tmar, created several centuries ago. This is one of the best-preserved monuments of architecture. Lotus plantations are a rest for the eyes and soul. Enjoying the virgin flowers, you involuntarily forget that they are grown for practical purposes. Lotus seeds are an analog of Russian seeds. Leaves go to packing material, and stalks make strong mats. Before returning to your homeland it is necessary to stock up on souvenirs. The best choice, of course, in Phnom Chun Ching, a village of folk handicrafts, created specifically to attract tourists. If there is no desire to go to the village, all the necessary gifts for close and distant relatives can be purchased at the Central Market in Siem Reap, opening at six in the morning. Visiting Cambodia once, will certainly want to return to this exotic paradise.

Sights of Germany: the main cities

What to bring from China for memory: souvenirs from China