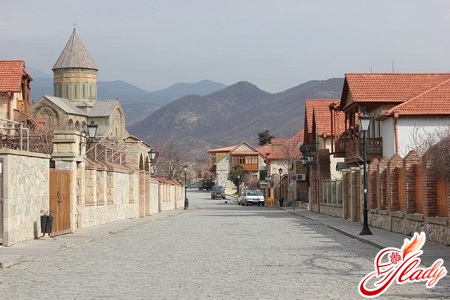 Georgia is a state with a long history. On the territory of this country you can see ancient settlements, temples and monasteries. According to the most conservative estimates in the country there are about 10 thousand historical monuments of architecture, history and culture. The oldest of them, the acropolis in Mtskheta, dates back to the 1st century BC. To see all the sights of Georgia, it will take a lot of time. Many of the ancient buildings have no analogues in the world and are listed in the UNESCO World Heritage List. Unusual stone architecture on the background of picturesque mountain landscapes with numerous natural monuments is a unique and unforgettable sight. Sightseeing can be combined with recreation at the resorts of the region. There are about 300 sanatoriums, among them there are seaside balneological, mountain and mud sanatoriums. On the territory of the republic there are 118 museums. The most famous of them is the State Museum of Georgia, which exists since 1852. There are historical artifacts of Georgia and the whole Caucasus - exhibits, which make it possible to visualize the development of civilization in this mountainous region. 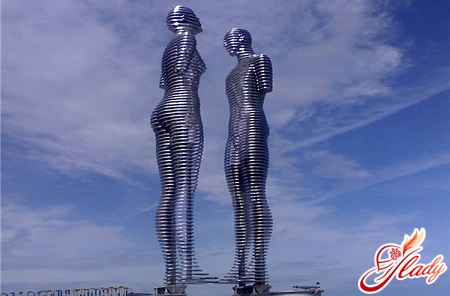 Tbilisi - the history and the present

The capital of Georgia - Tbilisi - belongs to the most ancientcities of the world, in which a huge number of monuments of different eras are concentrated. Its history dates back to the VI-III centuries BC. "Tbilisi" means "warm". This name was given to the city thanks to hot springs located nearby. Tbilisi is the largest city in the country, located in the valley of the Kura River at the foot of Mtatsminda Mountain, which means "Holy Mountain". In Tbilisi, you can find objects of ancient architecture next to modern multi-storey buildings, parks and bridges across the full Kuru. Children's amusement park Mtatsminda At the top of Mtatsminda a wonderful children's park is broken. You can get there by cable car or by local bus. The park is considered childish, but it will be interesting to visit everyone. In the park there are a lot of unusual sculptures and statues, which are worth a look. Inside the buildings, on the facades of which were intertwined fanciful shapes of trees, decorated with figures of birds and animals, you can find cozy restaurants. In Mtatsminda is especially beautiful in the period when roses blossom, planted on the territory of the park, blossom there. A wonderful view of the city of Tbilisi opens from the mountain. From here you can see the temples - the most famous sights of Georgia, which are in Tbilisi: the cathedral of Tsminda Sameba, built in honor of the 2000th anniversary of Christianity, the old town with its winding streets and old churches. On the left bank of the Kura River is a monument to Vakhtang Gorgasal, king of Iberia, who is considered the founder of Tbilisi, and the medieval Metekhi temple (III century). Attractions and unusual color of the Old City Having come to Tbilisi, you first need to visit its historical part - the Old Town, which is located in the south-eastern part at the very foot of Mtatsminda Mountain. Only here you can feel the special flavor of the architecture of old Tbilisi and see its sights. Brick houses in 2-3 floors with carved wooden balconies, and under them narrow streets of the Old City. In the central part of the city is the oldest fortress of the country Narikala (Shurisikhe) - IV-VIII cc. and many other interesting objects. It is necessary to see Anchiskhati - the oldest city church of St. Mary (VI-XVI centuries). The most important cathedral of Georgia - Sioni Assumption of the Blessed Virgin Mary, is named after Mount Zion in Jerusalem and, like other Sioni temples, is dedicated to the Mother of God. Tbilisi's Sioni houses the most famous shrine of Georgia - the cross of St. Nino, which according to legend was handed over to her by the Virgin. Until 2004, the Sioni Cathedral, established in the V-VII centuries, was the current residence of the Georgian Catholicos. The temple was destroyed several times during wars and earthquakes, but each time it was rebuilt. The cathedral is a typical architecture of the Middle Ages of the late period. As inside the building, and on its facade you can see the saved fragments from different eras. To the later monuments of the Old City, which are worthy of attention, include the church of Kashveti (1910), Norashen (1793), the palace of Queen Daredjan Sachino (1776), Paliashvili Opera House (1851) and other equally interesting objects. 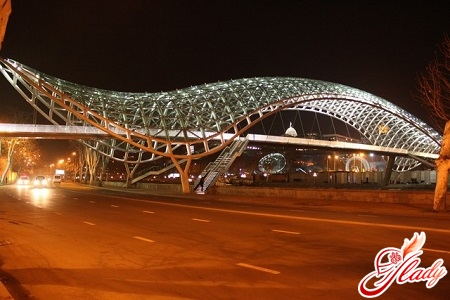 Mtskheta - the birthplace of Christianity

Having inspected the sights of Tbilisi, it is worthto go to a small town in Mtskheta, which is 30 km from the capital, "... where there is a fuss, embracing like two sisters, the streams of Aragva and the Kura ..." (M. Yu. Lermontov). The city was founded by one of the sons of the famous Kartlos, the progenitor of the Georgian people, whose name was Mtskhetos. He built a fortress, around which grew a city - the capital of Iberia. Tbilisi was proclaimed the capital in the 5th century AD. In 736, Mtskheta was plundered by the Arab Caliph, Transcaucasian governor Marwan II, and has since ceased to play a significant role in the political life of the country. Mtskheta is considered Georgian Jerusalem. There are two important Orthodox shrines, laid under the reign of Mirian, who in 337 proclaimed Orthodoxy the state religion. At the behest of this king were built two Orthodox shrines - the temple of Svetitskhoveli and the monastery of Samtavro. Samtavro Monastery - a shrine for all Orthodox The monastery's territory is an architectural ensemble of the Samtavro-Preobrazhensky Church and the nunnery of St. Nina. The church was built in the IV century. Later it was destroyed several times and erected again. There are several holy places, including miraculous icons, the graves of Mirian himself and his wife Nana and the power of other saints. Near the temple there is a small inconspicuous structure. This is the church of St. Nino - Makvlovani, which means "bramble". Nino preached Christianity, finding a refuge under the branches of the bramble bramble. It is believed that Makvlovani was built in the very place where St. Nino lived and preached. Historical place Tbilisi - Svetitskhoveli Cathedral The famous Svetitskhoveli is the main cathedral of Georgia, which for millennia has been and remains the stronghold of the Christian faith. The temple is a UNESCO World Heritage Site. The cathedral was a place of coronation and a burial vault of kings of the Bagration family. They erected Svetitskhoveli in the place where the sister of Rabbi Elioz was buried in the I century, who died with the Lord's garment in her hands. The relic was buried with the woman, and after a while the cedar, which was worshiped as a shrine, grew on this place. The temple was erected much later at the insistence of Saint Nino. The cathedral that can be seen today exists from 1010 onwards. The trunk of the cedar remained in place. Because of his miraculous power, it was not possible to cut down the tree. Later it was called the "life-giving pillar", the trunk of the tree and to this day can be seen in the center of the temple. From the central part of Mtskheta is well visible a significant attraction - the temple of Jvari. He rises on a hill above the city. In translation from Georgian, "Jvari" means "monastery of the cross." This is one of the best creations of the medieval architecture of Georgia. 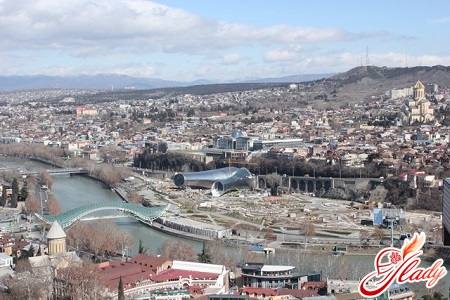 The city of Batumi is the capital of Adjara, a touristcenter, which is loved not only by the Georgians themselves, but also by numerous guests of the country. It is a seaside resort town, well-renovated and always ready to welcome guests. There are a lot of restaurants and hotels, and in the vicinity of the city resort towns, where they offer beach holidays. There is something to see in the Old Town, which is located in the northern part of Batumi. Within this area the city existed at the beginning of the century. The city itself can be considered a landmark of the republic, because it was almost completely restored, and the eastern streets of the Old City are made in the European manner. The famous Boulevard, along which it is necessary to walk by all means, is planted with palms and firs. This is a famous tourist destination. It is worth to stroll along the street of King Farnavaza. There you can see the old Greek temple in stripes and the Italian square in the style of Venice. Batumi is planned in such a way that it is difficult to get lost on the streets of the city. Moving from one avenue to another, one can see buildings with amazing architecture, fountains, temples and make your impression of this unusual seaside town. 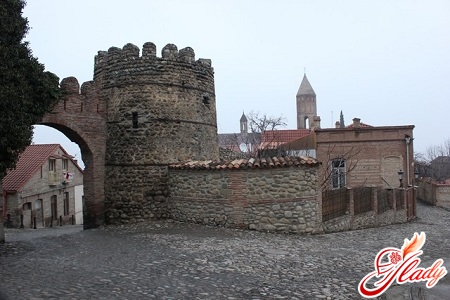 Traveling in Georgia, you need to seecave monasteries of this amazing country. These monuments include Vardzia - a whole city, carved into a rock to a depth of 50 m and consisting of 600 rooms. The view of the cave complex is amazing - its length is about 900 m, and the height of numerous tiers corresponds to the height of the 8-storey building. The cave monastery dates back to the 12th-13th centuries. The fortress-monastery of Vardzia was built as a fortification, which was to close the way to the invaders who attacked from the south. During the construction there were 3 thousand cave galleries with numerous secluded lazy and rooms, which accommodated up to 50 thousand soldiers. The center of the building is a temple carved into the rock, on the walls of which there are preserved frescoes with faces of George III and his daughter Queen Tamara. This unusual rocky structure is located 200 km from Tbilisi near the town of Akhaltsikhe. In the mountainous area in ancient times people settled, and the Caucasus was no exception. Until now, an unusual city has survived, whose houses are carved in the gentle slope of the cliff. The ancient city was founded in the II millennium BC. Hollowed out in the rock cave houses can be seen near the town of Gori on the bank of the mountain river Mtkvari. The name Uplistsikhe has been preserved since those times without change and means "the fortress of God." Usual in our understanding of the road to the city there, there is a tunnel that served the inhabitants of a stone village by a secret passage to the river. Georgia welcomes guests not only with monuments of culture and ancient architecture, but also with the beauty of its landscapes, the hospitality of local residents. Caucasian cuisine and famous Georgian wine, the opportunity to improve health in sanatoriums and visit local attractions will make visiting this country a rich and interesting adventure.

Sights of Moscow and the greatness of the city

Portugal: attractions and historical heritage of the country

Rest in Sicily: an acquaintance with the original corner of Italy

Holidays in Bali - a trip to paradise