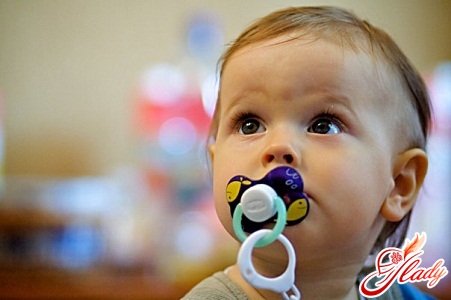 It goes without saying that a violation of absorptionspinal fluid and its circulation can not but pass without a trace for children's health. And manifestations can be very different in different children, especially different age categories - up to two years, and after two years of age. Symptoms in the age of up to two years: The most important sign that a child suffers from hydrocephalus is the accelerated growth of the head circumference. This is due to the fact that the seams of the skull of a young child are not yet fused, and the bones are parted by a larger brain. This happens about the same as when inflating an air ball, only in the brain instead of air there is an excess of water. As you know, before a child reaches one-year-old age, one must come to the pediatrician for a preventive checkup once a month. A mandatory examination involves measuring the circumference of the head. The doctor makes a graph of the growth of the head circumference, by means of which it is possible to track the increase in the circumference of the head. Most often, the cause of the pathological increase in the circumference of the head is hydrocephalus. In addition to too rapid growth of the head circumference about hydrocephalus may indicate a change in the large fontanel - it grows in size and overstresses. Normally, the fontanel should be closed to one-year-old age, but if the child suffers from hydrocephalus, the fontanel can be open and in two years. If you are interested in what hydrocephalus looks like in children, the photos will help you get an idea. Changing the proportion of the head - the bones of the cranium are much thinner, causing the baby's forehead to increase and protrude, becoming disproportionate. Under the skin of the forehead and face, the venous network is clearly visible. If the disease continues to progress, the eyes of the crumb begin to fall, the muscle tone of the arms and legs rises. There is a clear lag of the child in psychomotor development:

A child suffering from hydrocephalus of the headbrain, sluggish, he has no interest in anything around, very often he suddenly starts to cry, for no apparent reason. Doctors suggest that the child often experiences a headache, since the crumb very often grabs the head. There is a huge number of very different symptoms of increased intracranial pressure. However, most of them are able to recognize only experienced doctors - pediatrician, neurosurgeon or neurologist. The only thing that parents can do is measure the circumference of the child's head independently and note changes in his behavior and psychomotor development. In the event that parents and a district pediatrician notice any deviations in the growth and development of the child, this should be a serious reason for a complete and thorough examination of the child. This examination is necessary in order to exclude the presence of hydrocephalus in the child. Symptoms of hydrocephalus in children over the age of two years: If hydrocephalus develops in children older than 2 years of age, the symptomatology of the disease looks slightly different from that of babies. The most classic symptom of increased intracranial pressure in children older than two years is a constant headache, accompanied by a feeling of nausea and even debilitating vomiting. Most often this phenomenon is observed at night and in the morning. In addition, in a child suffering from hydrocephalus, pathological changes in the fundus often occur, due to the fact that the child has an edema of the optic nerve disk. Such a violation is easily revealed on the examination of the child by the ophthalmologist. Parents should always remember that any headaches in children, and even more so those accompanied by nausea and vomiting, are almost always a formidable symptom that requires an immediate examination of the child by a neuropathologist or neurosurgeon. After all, hydrocephalus is not the only possible cause of such symptoms. Nausea and vomiting can be caused by various tumors and malformations of the brain. To the great regret, very often pediatricians simply completely overlook this fact. And as a result, the child receives absolutely unnecessary treatment for such diseases as pancreatitis, gastritis, dyskinesia of gall bladder, poisoning and other diseases of the gastrointestinal tract. As a result, the child gets to the doctor - a neurologist only when the doctors understand that the treatment did not bring results. A precious time has already been lost, the disease can take a neglected form, and the treatment will be much more difficult and less productive. In the event that parents notice their child's symptoms, they should insist on an immediate examination of the child from a neurologist. In the event that the disease is diagnosed at an early stage, the prognosis of the disease will be much more favorable than with neglected forms. And sometimes only timely diagnosis can save a baby's life. There are a number of other symptoms that may indicate the presence of hydrocephalus in the child. Such symptoms include epileptic convulsions, increased tone of arms and legs, urinary incontinence, impaired vision. In addition, with hydrocephalus, various disruptions in the endocrine system are not uncommon: lagging behind or advancing in growth, premature puberty, obesity.

Of course, after learning that their child is sickhydrocephalus, they begin to wonder "Why?". It is simply impossible to answer this question unequivocally. The following are the main causes leading to the development of hydrocephalus:

The level of modern medicine is quite high, andmodern methods of prenatal diagnosis allow doctors to identify the fetus hydrocephalus. For example, ultrasound diagnosis can detect cerebral hydrocephalus as early as 16 to 20 weeks of gestation. Most often hydrocephalus during intrauterine development causes intrauterine infections such as herpes, toxoplasmosis or cytomegalovirus. That is why, when planning pregnancy, it is very important to pass all the tests for hidden infections, and if necessary, to undergo the appropriate course of treatment. This measure will help you prevent a huge number of health problems in your baby, not just the risk of developing hydrocephalus. In more rare cases, hydrocephalus can develop because of genetic predisposition.

In the event that the development of hydrocephalusoccurs in children older than one-year-old, there can be a huge number of reasons. Such reasons may include: meningitis, encephalitis, infectious-type diseases, developmental defects of the brain vessels, craniocerebral trauma, genetic disorders. Sometimes, unfortunately, to reveal why the brain hydrocephalus in children, in some cases, fails.

In order to diagnose hydrocephalus, the doctor should interview the parents and examine the child himself. After this, a number of studies will be carried out:

On the basis of the findings, the doctor will correctly diagnose and select the appropriate treatment strategy for your child.

In the event that the diagnosis of hydrocephaluswas confirmed, the child simply needs consultation of the neurosurgeon. In almost all cases, hydrocephalus treatment should be surgical. And it is the neurosurgeon that can detect both indications and contraindications to the operation. In the event that this is not done in a timely manner, the illness will take a chronic run-off, and the treatment will be more complicated. Of course, all parents are worried about the upcoming operation. However, do not overstay the decision. After all, constantly increased intracranial pressure leads to a delay in psychomotor development, which is not always possible to catch up with. Also do not forget about the size of the baby's head. As already mentioned, hydrocephalus leads to the fact that the head circumference is constantly increasing in the brain. And after the operation, it will not return to the previous dimensions, but will only cease to increase. And the longer you delay the operation, the more your baby's head will grow in size. The meaning of the operation is to remove from the ventricles of the brain into any other body cavity, from which it is then easily removed from the body. Most often for these purposes, ventriculo-peritoneal shunting is used. The doctor assembles a kind of system of silicone catheters, through which the cerebrospinal fluid from the ventricles of the brain into the abdominal cavity. Such operations annually not only save hundreds of children's lives, but also allow such children to lead a full-fledged way of life: to attend a kindergarten, school. We advise you to read:

hair loss in children: the cause

Computer addiction in children and the fight against it

Thrush in the child's mouth: symptoms and treatment

When does the child begin to brush his teeth?