Hair loss in children is a common problem, withthe parents face and the reason to consult a pediatrician. Hair can drop out and for quite innocuous reasons, for example, babies often have baldness of the occipital or lateral part of the head due to friction on the surface of the crib or stroller. This problem with age is solved by itself and the curls grow back as soon as the child begins to move more and spend less time lying down. This kind of fallout is called physiological alopecia. Also, hair does not grow from birth, with congenital alopecia, this ailment is usually combined with other developmental malformations. Often the treatment of this type of baldness does not bring results, as the hair follicles of the hair shaft are damaged. I must say, this disease is very rare. The density of the hair is also affected by the quality of food - the lack of a sufficient amount of vitamins and microelements in the daily diet will cause the hair to fall out. The nervous-emotional state of children, frequent stresses, and strong emotional upheavals can also give an impetus to the increase in the amount of hair that has fallen out. The causes of early alopecia in children are also hormonal disorders - thyroid gland diseases (especially hypothyroidism), adrenal glands, vegetative disorders, prolonged exposure to warm or cold air if the child walks in the cool season without a hat or is dry with curls. A rare cause of hair loss are poisoning with various toxic substances. Often the reason that the hair of children begin to fall out intensely is the manifestation of symptoms of any systemic or skin disease, a traumatic effect on the follicles.

A child can lose curls due to too muchclose headgear, tightly braided hairstyles (in girls), thermal burns or exposure to chemical agents. Hair restoration in children is possible only if the lesion affects only the surface layer of the skin and does not hurt the hair root. There is a kind of neurosis-like disorder - trichotillomania, the symptom of which is the frequent twitching of the hair, winding them on the finger, in severe cases the child literally tears out hair bundles. A similar condition can arise as a reaction to a prolonged stressful effect or an experienced shock. Such children need the advice of a psychologist or even a psychiatrist. Once again the curls grow back after the causes of the neurosis have been eliminated, as soon as the child gives up his bad habit. Head and body skin damage by one of the typesfungal infection. The areas affected by the fungus have the appearance of scissors cut off, hence the name of the disease. It is more correct to call this infection microsporia. She is sick with domestic cats and dogs, from them most often and children are infected. If you suspect a ringworm, you should immediately visit a dermatologist, as the disease is very contagious, and all members of the family can get sick. To the sick child it is necessary to allocate separate bed-clothes, a towel and other subjects of use. The diagnosis of microsporia is confirmed after scraping the skin scales from the affected area and detecting the fungal filaments under the microscope.

This is a specific type of baldness, the exact causeswhich has not yet been established. It is believed that with this type of hair loss, there is an autoimmune disease, manifested by the destruction of the cells of the immune system by follicles. Symptoms of alopecia areata are absolutely naked patches of different sizes, sometimes the entire surface of the head is bald - total alopecia. With a universal type of disease, absolutely all the hair on the child's body falls out. Another key symptom of this pathology is the rapid and unexpected loss of hair on the affected areas, against the backdrop of the child's visible health. It is noted that cases of alopecia are more common in children who are prone to frequent stress. 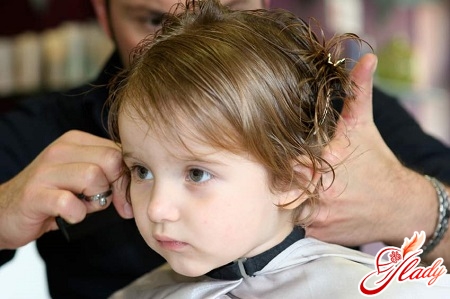 Telogenov called the form of baldness, whenThe follicle freezes in one of the phases of hair replacement - the rest phase. The hair covering of children and adults is not constantly growing, the replacement of curls occurs with a periodicity of several years. At the same time, previously growing hair freezes, its growth stops, the follicle passes into a state of rest. Then a new hair emerges from it, growing back, it replaces the old one. Noticeable eye loss occurs when a large number of follicles remains in the telogen phase and new hair does not grow in place of the old ones. The most common cause of such a fallout is the impact on the body of the child of certain medications, hypervitaminosis of vitamin A, procedures under general anesthesia. It is not excluded also the effect of chronic stress, sometimes hair loss is one of the manifestations of post-traumatic syndrome. In any case, if hair loss in children is observed, this should cause the parents to pay close attention. Early diagnosis will allow to identify the possible disease in time and increase the chances of its successful cure.

When the first teeth are cut: how to help the child