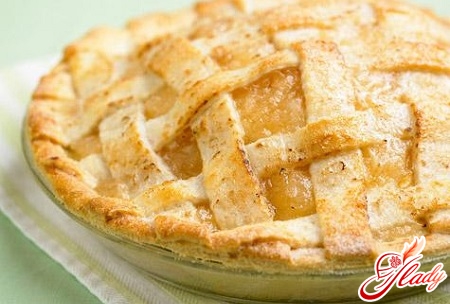 In any country where apples grow, be sure tothere are national recipes for apple pies. Our fatherland is no exception. Traditional Russian pie with apples is a yeast dough pie. However, time does not stand still, recipes smoothly wander from one national cuisine to another, change, supplement and do not seem alien, but are perceived as their own, primordial. So was the recipe for apple pie. It is impossible to say exactly where it was invented. But it is quite possible to take and cook with your own hand such a miracle cake. And if you are interested in a recipe for a jelly pie with apples, then welcome. We offer you a choice of several recipes.

They say that this pie got its name fromthe sisters of the Tsvetaeva, who on summer evenings at the dacha arranged receptions and baked such an unusual pie with apples. In fact, the taste of the pie is simply stunning! However, you can see for yourself. Ingredients:

Preparation: Margarine we give a little to melt, mix it with sugar and rub it into a homogeneous mass. Then add to this mass sour cream, baking soda and mix. And now we begin to gradually pour the sifted flour, kneading a fairly steep, but elastic and soft dough. The amount of flour depends on the density of sour cream, so in the recipe it is indicated approximately. The finished dough should not stick to the hands. Now the baking dish is greased with vegetable or butter and spread the dough into it, which we evenly distribute along the bottom and the sides of the mold. My apples, peel and remove from them a hard center with seeds. Then cut the apples into thin slices and put them into the mold with the dough. It remains to prepare sour cream for pouring. By the way, while preparing the cream, you should turn on the oven and heat it to 170-180 degrees. So, cream ... Sour cream is beaten lightly, and the egg is ground with sugar. Now pour the sour cream into the sugar and egg mixture, add flour and mix well until smooth (without flour and sugar pellets). Pour sour cream cream pie and send it to the oven, where we bake for about forty-five minutes. We remove the prepared pie from the oven and let it cool right in the mold. Then shift to a dish and take a sample. By the way, on the second day, after standing in the fridge for a day, the cake becomes even more delicious. 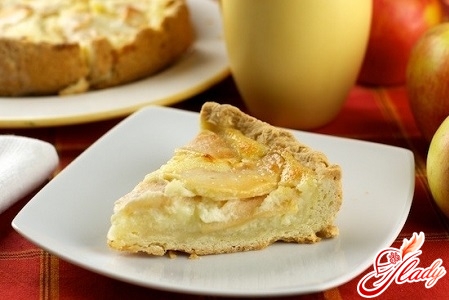 Delicious tasty pie with vanilla pudding. If you try, you will fall in love forever. Ingredients:

Preparation: Oil melted and cooled. Then add sifted flour and baking powder (baking powder), egg and vanilla sugar. Mix the soft elastic dough of a homogeneous consistency. The form for baking is lubricated with oil and powdered with flour, and then we spread the dough into it and distribute it on the bottom and sides. Now, my apple, peel, remove the core with seeds and cut the flesh into small lobules. Lay the apples in an even layer on the bottom of the mold with the dough, sprinkle the raisins on top of the apples and fill it with cream. To make a cream, mix a glass of cream with a vanilla pudding, and the remaining cream is boiled. Now pour hot cream into the pudding, put it all on a slow fire and, constantly stirring, give the cream to boil. Top with a cake of sugar mixed with cinnamon. We put the mold in a preheated to 170-180 degree oven and bake our cake for about an hour. When the pie blushes, remove the form from the oven and leave it with a pie for ten to fifteen minutes. Then carefully remove the jellied pie with the apples from the mold and let it cool completely. 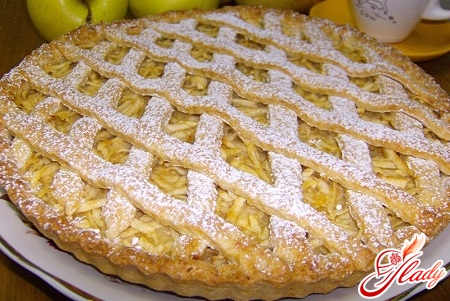 Another recipe for an amazing jelly pie with apples. We will make this cake from the cottage cheese pastry. Ingredients:

Preparation: Chop the butter into small pieces and put into a bowl. Flour sift and mix with baking powder, and then add to the oil. We put cottage cheese, salt and sugar there and knead the homogeneous plastic dough with our hands. We wrap it in a food film and put it in the refrigerator for half an hour. In the meantime, mine, we clean and cut apples on quarters. We remove their hard middle with seeds. Six pieces left intact, and the rest cut into small cubes. Cut the diced apples in warmed butter, add sugar and stew apples until soft for about ten minutes. Now we take out the dough from the refrigerator, spread it on the table covered with flour and roll it into a layer five to seven millimeters thick. We shift the dough into a mold, distribute it on the bottom and sides. The height of the boards from the dough should be about three centimeters. The rest of the dough should be cut off. In the form with a dough, put a dense layer of apples and put the form in a preheated to 180-200 degrees oven for ten minutes. In the meantime, sour cream is beaten with sugar, eggs and vanillin, add potato starch and once again whisk. We take out the pie from the oven, fill it with sour cream, and from above place whole quarters of apples (in a circle) and lightly press them down. Again put the cake in the oven and continue baking for another twenty to thirty minutes. The finished pie is cooled directly in the form, and then we shift to the dish and serve it to the table. If you try to prepare a jelly pie with apples, you will certainly be satisfied! The taste is unique, the fragrance is inexpressible! Do not be afraid to experiment and cook with pleasure. Enjoy your appetite and success in the culinary field!

Cake with apples and mango: recipe

Fritters from courgettes - the process of cooking

Pie with apples and cinnamon: ideal for a delicious breakfast