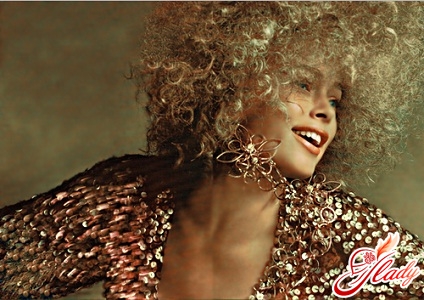 As you know, women are absolutely creaturesunpredictable. Today, a woman can look like this, and the next day - it's different. The same applies to hair. Those who have straight hair dreaming of curly, and whom nature has endowed with beautiful curly locks, by all means, want to have straight hair. Straight hair to do curly learned already many centuries ago. But from curly to do straight it became possible quite recently. There are two technologies of hair straightening:

For straightening hair thermallyapply hot combs, tongs-ironing. The combs are usually made of steel or brass and can be electric or conventional. And the more often the teeth of such a comb - the better the hair straightens. In addition to combs, there are also tongs and iron. The cheapest ironing is done with metal plates. Such ironing very damages the hair, especially if you use this tool often. And ironing with ceramic plates are more expensive, but the damage from them is much less. Also for straightening, you can use a conventional hair dryer, but this method is the most short-lived. A straightening of hair chemically something, in fact, similar to a chemical wave, only the hair does not end up in the end, but on the contrary straighten. First, a special chemical composition is applied to the hair, then the fixator and in the conclusion of the procedure - the conditioner. For this procedure, mainly two chemicals are used:

Hair straightened chemically will remainstraightforward forever. Unless the roots will curl as the hair grows, so you should correct the result every 2-3.5 months. And repeatedly chemical straightening is done only on the overgrown roots of hair. Before going on chemical straightening, it is necessary to take into account several important factors:

If you are interested in learning how to do chemical hair straightening, then read on.

How is chemical hair straightening done?

So, the chemical straightening of the hair is donein the following way. First, dry hair is combed, divided into strands and then they are applied a chemical, which contains either sodium hydroxide or ammonium thioglycollate. The choice of the remedy depends on the degree of curl of the hair. If you use the means for chemical hair straightening based on sodium hydroxide, then the hair does not need to be pre-treated with shampoo. And if you are using funds based on ammonium thioglycolate, then first you need to wash your hair with shampoo. The hair begins to be worked from the nape of the neck. If a strong chemical is used, then first use a base, which serves as a Vaseline cream. This cream protects the scalp from chemical burns. And if you do not use too strong a tool, you can do without a foundation. In addition, a special brush or comb is applied to the hair with a protective cream that protects the hair from excessive harmful effects of chemicals and only then it is applied a chemical preparation. After a while, the hair is thoroughly washed in a lot of warm water, and then processed with a special tool that fixes the results of straightening and neutralizes the action of the chemical. The neutralization process involves oxidation and recovery of the pH level, which during the use of the chemical is greatly increased, which can cause swelling and further damage to the hair. Then again, the hair is thoroughly washed and dried with a warm towel, and the towel is best used terry. And only after these stages they start to lay their hair.

What means are used for chemical hair straightening?

When hair is straightened chemically, the following means are usually used: 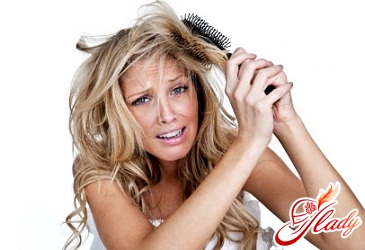 Various means used for chemicalstraightening hair, there is a lot. But all of them can be divided into several main types. We have already talked about two of them in this article - they are based on ammonium thioglycolate and on the basis of sodium hydroxide. Such tools are used most often. But there are several more types of chemicals - based on caustic soda and based on guanidine hydroxide. The funds based on caustic soda are the strongest. And they do a lot of harm to the hair, although the results from the impact of such funds are the most noticeable. The concentration of caustic soda solution during chemical straightening can vary from 5 to 10%, which depends on various conditions and factors of hair straightening. The pH level when using caustic soda can vary from 10 to 14, and the higher this value is, the faster the agent will act, but the more will damage from rectification. Guanidine hydroxide-based products do a little less damage to hair than caustic soda, but their effect is also weaker. Such products degrease the scalp, so in the case of using such a means, both before and after applying the drug, use special conditioners. As already mentioned in this article, a protective base is used for chemical straightening. Apply protective cream on the entire surface of the scalp with the fingers. And necessarily processed cream of the nape of the neck, around the forehead, under the ears and above them. The protective cream acts as a protective barrier, which protects the skin from chemical burns. Also in the process of chemical hair straightening, neutralizers are used, which are designed to stop the action of chemicals and restore the normal balance of pH in the hair.

The composition of means for straightening hair using Goldwell technology includes such therapeutic and caring components as:

Goldwell's products are suitable for all types of hair. Also, these remedies can easily cope with the hard brunette hair. From a series of tools of this technology, qualified specialists can choose the formula that will be optimal for your hair.

Straightening the hair at home

Unfortunately, chemical hair straightening at homeIt is impossible to do this because this procedure should be done exclusively by a professional. But for home conditions, the option of thermal straightening is perfect. For these purposes, it is best to use ceramic-coated iron irons, especially if you have to straighten the hair in this way regularly. After ironing with a ceramic coating not only more gently straighten hair, but the effect of straightening is much better than from metal ironing. The application of irons has its own nuances: 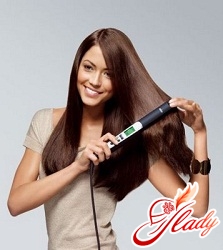 Let, of course, the chemical straightening of the hair at homenot accessible, but this method is quite acceptable, is not it? In addition, hair straightening with irons or a hair dryer at home has one indisputable advantage over chemical hair straightening: many women's reviews will show that straightening at home is unquestionably cheaper. Approximately as many as 15-25. On the other hand, at home, to achieve an ideal smoothness and shine will not work. Here, of course, chemical straightening wins. In general, before you decide to finally get rid of curly ringlets, think three times: do you really need this? Read on the Internet at women's forums. After all, chemical hair straightening reviews of women who have gone through this procedure, have a different character. So, some write that the hair after chemical straightening becomes simply unusually beautiful, smooth, shiny and well-groomed. And others - on the contrary, that the hair becomes very thin and more entangled, they appear creases, they get dirty faster ... In general, how is the chemical straightening of the hair done, what is needed for this, what effect from such "chemistry" we told you, and To expose the hair to the given procedure or not - to solve to you and only to you! But regardless of your choice, we wish you to remain always beautiful and attractive. We advise you to read:

Pricked hair - is it difficult?

Mask for hair with red pepper

Masks for hair at home: to shine your curls