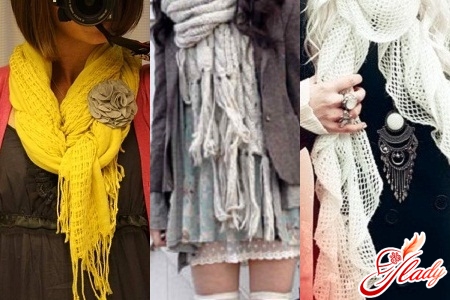 Products that are lighter in performance than knittedscarf just is not! In fact: dial the number of loops for the desired width of the scarf, and then climb in a straight line at the desired length. It's actually easy. Easy, but not easy! Do not just tie a beautiful scarf with knitting needles. Why? Because beauty is a relative concept, and what one likes is not likely to cause the same enthusiasm for another. However, originality is always beyond competition. And it does not matter how in your scarf this originality is manifested: the coloring, the pattern, the knitting technique or the model of the scarf itself. The main thing is that this is unusual, bold (or even bold!) And beautiful. Therefore, let's look at several variants of the original execution of a hand-knitted female scarf. 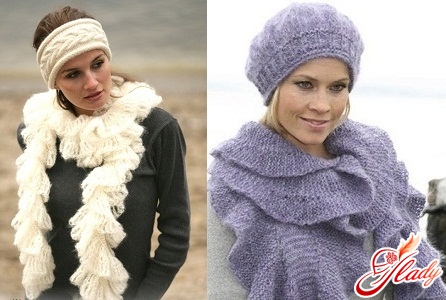 Or, as it is also called in another way: scarf-wave, scarf-boa. The main thing here is not the pattern of knitting, not the kind of yarn and the coloring of the finished scarf. The main thing in scarf-boa is the originality of the model and the technique of execution. Scarf spiral - it's solemnity, splendor, festivity ... It looks like at the same time and the exquisite lacy jabot, and the air boa of exotic feathers, and just a scarf (but very original). How to tie a scarf with spirals? We type on the spokes twenty-four loops, we sew the first row: edge, eleven face and twelve purl. Then we knit along the pattern:

We knit the scarf to the desired length with blocks of these four rows. The color and quality of the yarn is at your discretion. 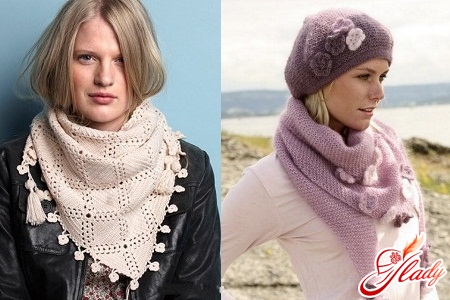 Bactus is called a scarf-kerchief bound toknitting needles or crochet. The length of this scarf - from one hundred and thirty centimeters (you can more), and the width - no more than forty centimeters. Its originality is manifested not only in the model, but in various ways of draping. Knit such scarves or simple smooth (front or back) or openwork viscous. There are also two ways of executing the bactus: vertical and horizontal. The horizontal method is less common, but not less popular. For this purpose, the number of loops along the length of the scarf (from 130 cm) is typed on the spokes and knits it up to the corner (in width), gradually reducing the loops to get the shape of the triangle. To tie a beautiful woman's scarf bactus in a vertical fashion, we draw on the spokes four loops and knit the scarf up along the length, adding loops (one side) in every fourth row. After tying up to the top of the scarf (the corner of the scarf), we continue knitting, making the loops in each fourth row. For the cold season, the scarf bactus is knitted from warm woolen or downy yarn, one-color or melange. For summer or autumn, a cotton or silk bactus will be good, which is better to tie with an openwork pattern. 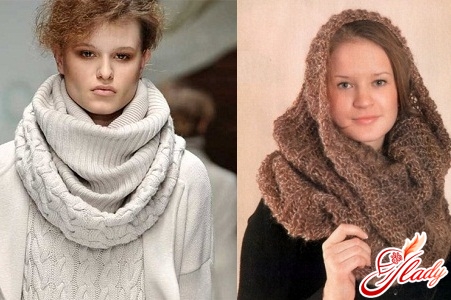 Or in another way: scarf-yoke, mini-snud. This option is good because it performs the function of not only the scarf, but also the collar, and also (if necessary) the hood or the cap. In addition, it can be a wonderful extra accessory even to a business suit (this is how to tie!). Such a scarf, as a rule, is knitted in a circle and has no seams. For a good drapery, the scarf-yoke is best knit with a patent pattern: simple, English or French rubber band. But this is not a necessary condition. Such a scarf can be connected and any other pattern, even with braids and knobs. Look great snuff made by Scandinavian patterns or knitted from melange yarn, decorated on the bottom edge of pompoms or brushes. On a snack of medium size and density, you will need about one hundred grams of yarn and circular knitting needles. Type on the spokes about two hundred and forty loops and knit an elastic band around a circle of about twenty centimeters. If such a scarf is supposed to be worn, like a collar, a hood, a hood or a cap, then its width should be sufficient for draping in the décolleté area or to cover their head. So, for example, to tie a scarf-hood with a pattern of wide braids, you need to collect one hundred and twenty loops and knit a double (two face, two purl) with an elastic band of ten centimeters. Then you should take knitting needles larger and knit with broad braids (out of ten facial) for about fifty centimeters. After tying to the desired length, close all the hinges. How to tie a beautiful scarf without special frills? Just choose a beautiful yarn (in color or in texture). And you can also tie a scarf with a delicate or relief pattern or with a pattern of yarn of contrasting colors. Believe me, that often this is enough. Or vice versa, let your imagination run wild. Use the patchwork technique for your knitted scarf or decorate it with voluminous rococo embroidery. Try to tie the scarf with Tunisian knitting or in the technique of freeforms. So, without delay, take your hands in the hands and safely realize what you have conceived: and you will succeed! We advise you to read:

How to weave braves: ways of weaving

How to make candles: elements of creativity in the design of apartments and houses