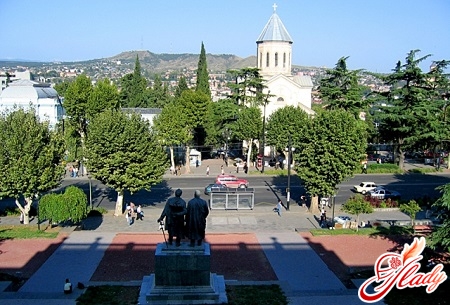 Tbilisi is an amazing city! It harmoniously neighbors the historical center, the so-called Old Town, and a modern district filled with shops and restaurants. Both of these parts of the city are full of sights. To explore all the sights of Tbilisi, you need at least a week. And if you take into account the Georgian hospitality with long sit-ups in restaurants, then at least 2 weeks are worth visiting for this city. It is logical to start acquaintance with the city of Tbilisi from its historical center. The old town is a unique fairytale district. Then they run up and down old brick streets, walking along which you continuously admire the ruins of the fortress, temples, palaces. On the same streets artists and artisans sell their creations. In the center of the Old City there are a mosque, a synagogue and the Armenian Apostolic Church. 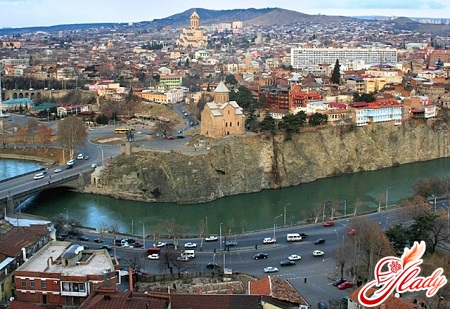 Temples and cathedrals in the Old Town

One of the most significant sights of Tbilisi -the ruins of the temple of Mette, erected in the XII century. The history of the temple is not easy. Many times it was destroyed by the Mongols, then by the Persians. And each time it was again erected and restored. Today there is little left of the temple: a square brick building with a towering circular turret in the center. Previously, there was a temple, a monastery, and a castle. And he stood at the burial place of the first Georgian martyr named Shushanik Ranskaya. She was killed by her husband in the 5th century. Another no less important attraction is the current Zion Cathedral, or Sioni. The cathedral was built in the XII century, several times destroyed and restored. Today this is a modest building with no decorations, but in fact it is the Cathedral, the residence of the Catholicos. In addition, here is stored a very important for the Georgian people shrine - the cross of St. Nino, which established Christianity in this land. The unique place is the church of St. Mary, which today is called the Anchiskhati church. And this church is interesting in that it was built in the VI century and still operates today. The church is also interesting with its architecture, which is not peculiar to buildings of this purpose - three-nave basilica. The most modern, most majestic, most beautiful cathedral of Georgia is the Cathedral of Sameba. Built in 2004 for donations of citizens, the cathedral has a height of 78 meters and a capacity of up to 15,000 people. The temple is visible from anywhere in Tbilisi, especially at night, when its illumination turns on. 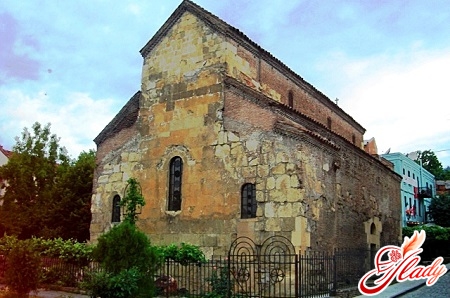 Having inspected the sights of the Old Town,Climb to the holy mountain of Mtatsminda, better known as the mountain of David. From the mountain offers a stunning view of the city. On the mountain there is a television tower (has a height of 274 m and an unusual form - the trunk and two "props"), the building of the funicular station, a small church of St. David and the cemetery where the outstanding figures of the country are buried. But the most interesting thing on the mountain of David is the fortress of Narikala. The inhabitants of Tbilisi treat these ruins with special trepidation and like to call them the heart of the city. The fortress was built at the same time, when the city of Tbilisi was founded, in the IV century. Over time, the fortress was completed, improved, but the earthquake of 1827, she did not survive. Since then, only the ruins and the church of St. Nicholas, which in the 90's were reconstructed, have remained from it, and today it is in force. 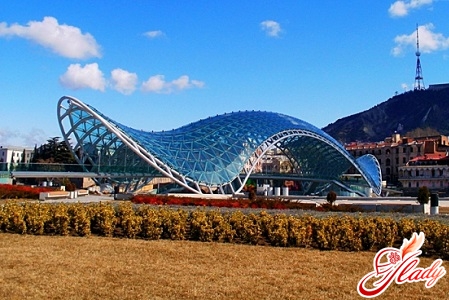 The sulfur baths of Tbilisi

The presence of a large number of hot sulfuricsources served as an impetus to the construction of sulfur baths in these places in the XVII-XIX centuries. However, in the old days it was not only and not so much a place where people came to wash themselves, but a place where they sat up long in the evening for intimate conversations, a place where the matchmakers held a show, where dinner parties were given. Today in the Old City there are 7 sulfur baths, those that were built many years ago. All of them are built in oriental style. The most beautiful bath is the Orbelian bath due to its minarets, lancet façade with blue tiles. Inside the walls the baths are decorated with mosaic. Modern sulfur baths have pools with hydrogen sulphide, shower, pedestals for massage, made of stone. Sulfur baths are a favorite place not only for tourists, but also for locals, because they are very useful for health. It is believed that the beauty and youth of a woman directly depends on the regularity of visiting sulfur baths. 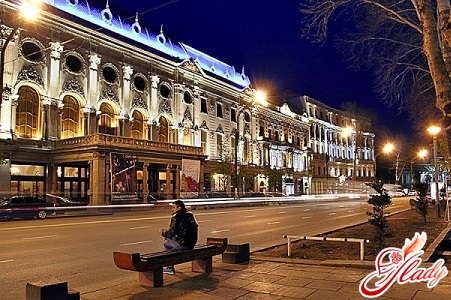 Modern part of the city: museums and theaters Tbilisi

No less attractive attractionssettled down and in the younger part of the city. Basically they are located one way or another near Rustaveli Avenue. Prospect Rustaveli - the central street of the city. Here are located cafes, restaurants, hotels, cinemas. Life is boiling on this street length of about 1.5 km. On one side of the avenue is Freedom Square - it's the central square of the city. On Liberty Square is the administration building, the city's bank and the Statue of Liberty. All significant events of the country and the city take place on this square. On the other hand, the avenue closes the Rustaveli square. If you want to get acquainted with Georgia not superficially, then by all means visit the National Museum of Georgia. The museum is a repository of the values ​​of the Caucasian culture. And this culture, as you know, is very rich. The national museum presents vessels made of precious metals, decorated with precious stones, coins, jewelry, carpets, clothes, handicrafts. Many exhibits date back to the V-VII centuries. Particular attention deserves the very building of the museum, decorated in the Old Georgian style. No less interesting is the Museum of Arts of Georgia. And the exhibits in this museum are no less valuable. One gold cross of Queen Tamara, decorated with pearls, rubies and emeralds, what's worth! The museum also features the oldest icon of Georgia, gold ornaments, paintings by artists from all over the world, including our masters (Aivazovsky, Repin, Surikov, Serov, Vasnetsov). It's a pleasure to spend an evening at the Opera and Ballet Theater. The building of the theater with arches, turrets and beautiful stained-glass windows is an ornament of Rustaveli Avenue. The Shota Rustaveli Theater is no less beautiful. It is done in a different, modern style. The facade of the building has mirrored windows, and the walls are decorated with bizarre images of harlequins, chimeras, guri. There is also the Russian Drama Theater named after Griboyedov in Tbilisi, which is 160 years old not so long ago. 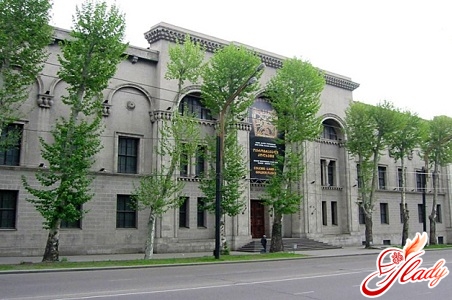 The most favorite natural place of inhabitantsTbilisi is the Turtle Lake, which got its name thanks to the Turtles that once lived here. The lake is at an altitude of 800 m at a distance of just over 3 km from the city. The lake is in the forest, around it there is a furnished beach with summer cafes, sun loungers, playgrounds. The lake is constantly fed by mountain streams, so the water in it is clean. To the lake you can climb the cable car, while enjoying the panorama of the city. Another favorite natural place for locals and tourists is the Botanical Garden, located near the Narikala fortress. The Botanical Garden dates back to 1625, when it was a small park for walks. Over time, the botanical garden was transformed and expanded. Today it is a large territory (about 130 hectares) with evergreen plants from all over the world (more than 3,500 species, including 700 native plant species), while the collection is constantly increasing. Immediately there is a clear river with three large bridges, near one of them the 42-meter waterfall quietly hums. The botanical garden is so well-groomed and beautiful, there are so many interesting plants in it that it flies unnoticed all day. Consider this fact when planning your time. Having spent some time in Tbilisi, you will not only dip into the history of Georgia, but also enjoy the beauty of the city and the hospitality and goodwill of the local residents.