"Little ropes" - so they call theA popular kind of Italian pasta comes from Naples. For cooking spaghetti there are thousands of types of recipes, but one of the most popular and, as many believe, one of the most delicious Italian dishes are spaghetti carbonara or, as pronounced in Italy, Pasta alla carbonara. Spaghetti carbonara - this is boiled spaghetti with slices of bacon and a unique sauce. Carbonara. Actually, this is the name of the unique sauce with which the dish is refueled. Spaghetti carbonara, the recipe of which is genuinely simple, will taste not only the lovers of Italian cuisine. 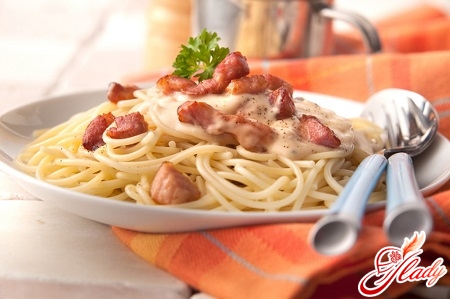 Recipe for spaghetti carbonara in the historical aspect

Carbonara is a coal miner. This is how the name of the sauce, which forms the basis of the spaghetti carbonara, is translated. The history of its occurrence is combined with the activities of the Italian coal artels, which long ago carried coal through Italy, and during the breaks they prepared a simple and quick dish in the preparation of pasta, pork cheek and sheep cheese. Surprisingly tempting smells from charcoal bowlers contributed to the fact that the recipe of the dish quickly spread throughout Italy and became one of the most adored in the country. Considering the recipe of Pasta alla carbonara in the historical aspect, some risk to assume that coal powder from the clothing of artel workers, getting into the pot during cooking, "flavored" the paste with black dust. Today, the dish is generously sprinkled with black ground pepper, reminiscent of coal dust, as if paying tribute to the "carbon" past spaghetti carbonara. In all cookbooks, the recipe for spaghetti carbonara is described approximately identically. The cooking technique is simple: boil the spaghetti, bacon fat, prepare the sauce from raw eggs and cheese, add the sauce in hot spaghetti and mix well. For a long history, the recipe has acquired cooking options that differ in the quantitative ratio of ingredients, types of meat ingredients and cheeses, and also have additional ingredients in the composition. However, its base remains unchanged - this is a special cooking sauce, which, apparently, is the source of the success of the dish. 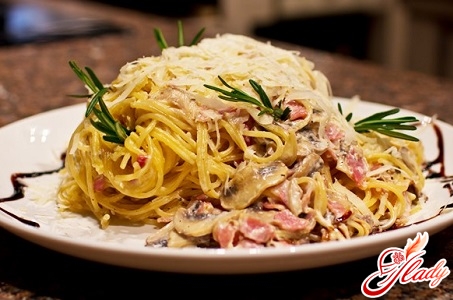 To prepare a dish for 2-3 people, a standard 400 gram packet of spaghetti and the following set of products is sufficient:

The recipe for pasta alla carbonarasuggests some feature, which can only be observed while simultaneously preparing spaghetti and sauce. First of all, for a strong fire, you need to put a large enough pot half full of water, and bring the water in a saucepan to a boil. While the water is heated, you can cut the ham in small slices, finely chop the onions and garlic, grate the cheese on a fine grater. In the boiling water of salt, you need to add so much that the water tastes a little more salty than the usual food. Lower the spaghetti into the pan slowly, so that as they soften, they completely immerse themselves in the water. After the water starts to boil evenly, spaghetti is carefully prevented and cooked until half-ready or, as it is called in Italy, "al dente". The traditional recipe for the dish is based on the use of hard wheat spaghetti, which are usually cooked for 10-12 minutes, as indicated on the packing instructions. Consequently, to the necessary state of "al dente" spaghetti should be cooked for 1-2 minutes less than recommended on the package. While the spaghetti is boiled, it is necessary to fry the bacon on a grilled vegetable frying pan before the crust is formed. Then add the onions and continue the frying until the softness of the onions and the characteristic smell of fried bacon. At the end of the process, you need to add garlic to sharpen the dish. While spaghetti is brewed and bacon with onion is fried, in a deep bowl with a fork, it is necessary to beat eggs and mix them with grated parmesan. To prepare the mixture, you can use only yolks, as recommended by the traditional Italian recipe, but the taste of the majority of the dish turns dryish. Some cooks solve the problem in the following way - use the yolks of 2 eggs and completely 2 eggs. A mixture of eggs and cheese should be added and peppered. By the time when the spaghetti is ready, all the ingredients of the sauce should be ready too. Then water is drained from the pan, hot baked beetroot and onions are added to hot spaghetti, egg-cheese mixture is poured into it, and everything mixes well. As previously noted, the recipe has a characteristic feature - carbonara sauce from raw eggs and cheese comes to the full readiness from contact with hot, freshly cooked spaghetti. Spaghetti carbonara after the preparation should be immediately served to the table, so that the sauce does not have time to freeze, sprinkling, if desired, with cheese and black pepper. 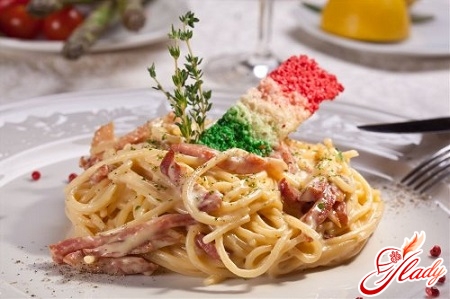 The basis of juicy and delicate sauce is eggs,so it is very important not to be mistaken with their quantity. The proposed recipe recommends taking 4 chicken eggs for a standard 400 gram spaghetti package. If you use more eggs, the carbonara sauce will be excessively liquid, the smaller - thick and lumpy. Prepare a carbonara sauce can, for example, with cream. So, 100 g of cream will successfully replace in the proposed recipe 2 eggs or proteins of all eggs. However, it is already impossible to name a similar recipe, since it is unacceptable to add cream in Italy. But such modifications are widely used in England and America. There very often dairy products are added to the sauce. As practice shows, Russian lovers of Italian cuisine have much in common with their Anglo-American "colleagues", and this additive is popular in Russia along with sour cream and butter. The recipe for cooking spaghetti carbonara can be simplified. So, whipped eggs in a bowl can be immediately mixed with chopped ham or other less fat substitutes of bacon, cream and grated cheese. This mixture is also added to hot spaghetti. Given that the meat ingredient is cold, mix the spaghetti with the sauce over low heat for a few seconds. This recipe, perhaps, is inferior to the traditional spaghetti carbonara with crispy bacon according to the taste, but is more useful and suitable even for young children. Now about the cheese. The traditional recipe of Pasta alla carbonara suggests the use of aged sheep cheese - a pecorino is novel, but many of the pecorino sauce will seem too harsh. To still feel the real taste of Italy, the chefs prepare a mixture of two cheeses: pecorino is novel and parmesan. Many culinary experts recommend adding dry red or white wine to the carbonara sauce. But real connoisseurs and connoisseurs of Italian cuisine believe that Pasta alla carbonara is better to drink than "spoil" with wine. And the last. Culinary experts, who often use the recipe for cooking spaghetti carbonara, are advised to warm up the plates before laying out a dish on them. So it stays hot longer, and the sauce does not lose its taste.

Potato casserole with mushrooms and cheese

Vareniki for every taste

The recipe for dumplings in Siberian