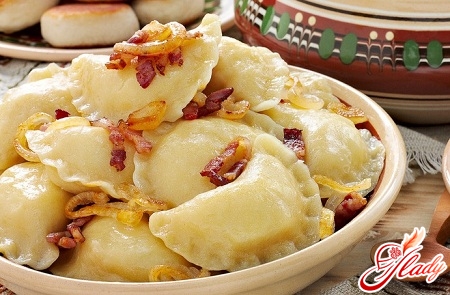 Vareniki is one of the most popular Ukrainiandishes. Their recipes are varied: someone prefers dough on water or milk, others this dish is better obtained from kefir or whey. Depending on the time of the year, the filling is selected: in the summer, the most ideal variant is fresh berries, and in the cold warm food is warmed, so dumplings are made with potatoes, meat, liver, mushrooms and other ingredients. We will tell you simple recipes, guided by which, you will become a real pro in the preparation of this dish.

Vareniki from simple dough with potatoes

The recipe for this dish is good because, firstly, itsimple and economical, and secondly, the products that will be needed for its preparation, there is in each refrigerator. Vareniki with a stuffing from a potato - remarkable dish for a family dinner. Ingredients: For the dough:

Cooking method: Start making dumplings with dough kneading: combine two kinds of flour in a deep bowl, mix it several times to get a uniform dry mix, and gradually pour in water, previously salty. Ideally, you should get a smooth, lump-free, non-sticky mass. Transfer it to the flour-poured kitchen table and roll it out with a rolling pin into a thin layer, then with a glass turned upside down, cut out the same shape of the mug. This will be your future vareniki. Now, prepare the potato filling. To do this, peel the vegetable and boil it in slightly brackish water, then drain it, and stir the potatoes in puree, adding a little butter to it. If you can not get rid of clots, rub the mass through a sieve, and best whisk blender. Onion peel and cut into small cubes, and after fry in vegetable oil to a light white shade. Then combine it with potatoes, you can add ground pepper and salt. When the filling cools down, begin to mold the vareniki. It's very simple: lay one or one and a half tablespoons of onion and potato paste in the middle of the mug, and then paw it with your fingers along the edges. Thus, form all the items and send them to the pan with the beginner to boil with water, cook for about ten minutes. By the way, you can put a little chopped greens in the vareniki - this will give them a special fresh taste. The dish is served with fried onion or homemade sour cream, and mayonnaise. Some housewives prepare a special gravy in which mushrooms and cream are added. If desired, find a similar recipe and make the sauce yourself. However, whatever you water your vareniki, they will still be very tasty! 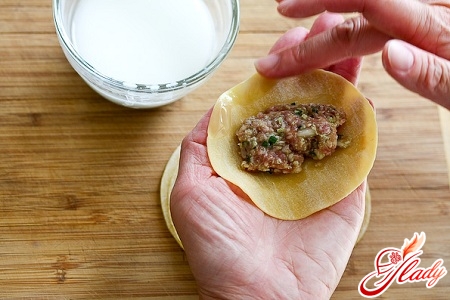 Filling from the liver

Do you want to make unusual vareniki and do not know how? It's very simple - read this recipe, buy in the store the necessary set of products and go to the kitchen to cook. Ingredients: Dough:

Cooking method: These dumplings are prepared from an unleavened dough, for mixing which you first sift well the flour, then collect it with a slide and make a hole in it. Now whip with egg whisk, mix it with water and pour the resulting mixture into the flour. Kneem hands not too steep, but dense mass, then cover it with a clean towel and leave for 30 minutes. Dumplings from this test are always obtained, because it quickly fits and does not require special skills from the cook. The next step is preparing the filling: so, take a piece of liver, pre-washed under the tap, and remove the film from it, after cleansing of the bile ducts and cut into small pieces. Then put it in a frying pan with butter and fry together with the cut onion cubes. When everything is ready, crush the filling with a conventional meat grinder or blender. Ingredients such as salt and black pepper, add to the vareniki at your discretion, because everyone has his own taste. You can also put a little fresh fennel or parsley - it will be very appetizing! The recipe seems to end - you just need to mold the vareniki. Put on a board, sprinkled with a few handfuls of flour, dough and roll it with a rolling pin, then cut out the mugs. In the middle of each of them put a warm stuffing, make sure that it is not too much, otherwise vareniki will disintegrate. Then connect the edges of the dough with your fingers and fix it well, some grease them with a beaten egg, but it is not necessary at all. Vareniki can be boiled in water or steamed. In the latter case, they are better kept in shape and do not fall apart. 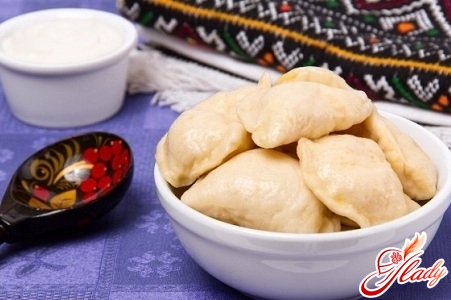 Vareniki from fresh dough with champignons

This recipe is dedicated to mushroom lovers! We made vareniki with champignons, but you can use other, for example, dried chanterelles or oyster mushrooms. Ingredients: Dough:

Cooking method: At this time, we'll start making vareniki from the filling, and then we'll get to the preparation of the dough. So, first remove the peel from the potatoes and put it on a quiet fire, and in a separate pan, boil whole mushrooms. Then discard the latter in a colander and allow to drain. Onions cut into pieces and put in a saucepan with the already preheated olive oil and lightly fry. When it becomes light, enter the chopped mushrooms and cook for another ten minutes. Vareniki can be made with dry mushrooms, but in this case they will need to be soaked in boiling water, and then fry. Now drain from the potatoes excess liquid, add a piece of butter and rastolkite to the state of mashed potatoes. If it comes out too thick, dilute it with warm milk or water, in which the vegetable was cooked. By the way, so that the mass turned out to be homogeneous, it is better to beat it with a blender, and then combine it with fried champignons and golden onions. In vareniki you can put a pinch of black pepper or do without it. The most important thing is the dough. It does not always and not all turn out to be successful, but using this recipe, you will cope with the chef's duties "with a bang," and your dumplings will be eaten home so quickly that you do not have time to blink an eye. Sift with a sieve of flour and pour it into a bowl with cold, but boiled water. Add the salt to your taste and vegetable oil. Knead everything with a spoon, then hands, and lay it on the work surface, which should be sprinkled with flour, otherwise it will be very difficult for you to roll the dumplings with a rolling pin, as the dough will stick. From the finished cake cut out medium mugs. Each of them fill with a small amount of filling (here it is better not to put it than to overdo it!) And fix it around the edges, holding the dough with your fingers. Now it remains only to boil the vareniki in salt water, put them into serving plates, pour sour cream or butter and enjoy the food prepared by your skilful hands. Many people serve this dish with onion, fried in a frying pan with butter. You can do the same. From the test we proposed, not only incredibly delicious vareniki, but also manti, as well as samsa, are obtained.

We offer a traditional dish, familiar to everyone from an early childhood, - vareniki with a delicate curd filling. We decided to add raisins for a change. Ingredients:

Cooking method: Whisk with a fork or whisk sugar and egg in a homogeneous mass, which is poured into the flour, pre-sifted, adding the salt and unburnt soda. Take the yogurt at room temperature and mix everything thoroughly. When you get a dense and elastic dough, cover it with a piece of clean cloth or a towel and set aside for half an hour. These vareniki can be made from ready-made curds mass, bought in the store, it does not need to be sweetened, just mix thoroughly and everything. But if you take the usual cottage cheese, then cut it with a fork or grate it through a sieve, and then mix it with sugar. As for raisins, then soak it for fifteen minutes in water, then rinse well, wring out and combine with the previous product. If the filling is dry, add a few spoons of sour cream. Now thinly roll the dough, cutting circles with the help of a glass. Fill each cottage cheese with a mass and tighten it around the edges. Cook in brackish water for no longer than ten minutes. Raw dumplings can be frozen and cooked as needed. There are the most incredible recipes of this dish, so if your family loves it, do not stop there, but improve your culinary skills by trying to prepare those or other options. We advise you to read: