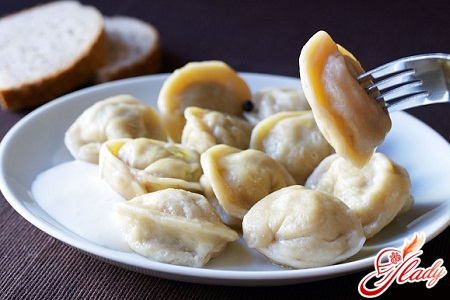 Dumplings in Siberia from time immemorial harvestedafter the establishment of severe frosts - for future use. In preparation, as a rule, all members of the family, from small to large, took part, and occupied this process for several days. It is clear that pelmeni were harvested with whole sacks. With such a volume, any culinary "freaks" would only slow down the workpiece, which is why the recipe for pelmeni in Siberian is so simple.

For the preparation of dough only flour is usedand water, everything, and no salt. The flour on the table is a slide, in the middle there is a small depression, into which ice water slowly pours in with gradual stirring. This is very important, in Siberia a bucket of water was specially exposed to frost and was used only when a crust of ice thick with a finger appeared from above. The dough is kneaded to such a state, when it starts to lag behind itself, ie. very cool. After mixing, leave the dough alone for an hour, covering it with a towel.

Dumplings in Siberia are made from three types of meat: beef, pork and suhatin. As a rule, the preparation of pelmeni directly depended on successful hunting - the first severe frosts the Siberians hunted for moose. This influenced the composition of the stuffing. Nowadays, it's almost impossible to get an elk, except in a zoo, so we replace lamb with mutton. So - beef, lamb, pork, and again no salt. The ratio of meat varieties is equal, one third each. Pork should be selected so that fat is not more than ten percent of the total weight. Obligatory, no, just an iron condition - minced meat should be chopped. No meat grinders! Cutting minced meat for dumplings is hard, usually men do it. Pieces of meat should be fairly small and approximately the same in size - this is the main secret of these dumplings in the Siberian way. Dumplings in Siberian - a recipe that does not imply an onion, and any spices in the stuffing. This is already a modern invention, detrimental to the taste of dumplings. Onion will appear on the table a little later, in the form of an ingredient in the dressing. 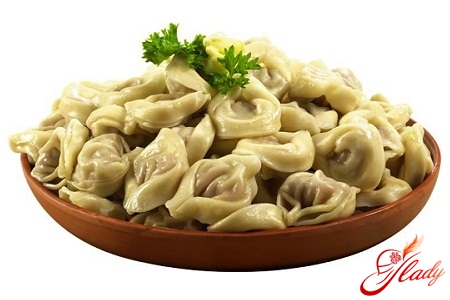 We roll the dough thinner! As the Siberians say: "The dough is needed only so that the meat in the pile was." A glass of "cut" circles, put a solid portion of minced meat on the dough bowl, so that it would be possible to pinch and twist the firm dumpling "eyelet". We spread ready dumplings on a board, previously sprinkled with flour and frost, in our case in the freezer. We keep it there until cooking. Preparation: Dumplings are cooked in Siberian not in any way, but in steep beef broth, it is clear that it is possible and in water, but we will leave this method for store semi-finished products. Broth should be well salt - remember, we did not put salt in the dough, or in minced meat? Do not use bouillon cubes - a decoction of cubes can not be a broth by definition. As soon as the dumplings surfaced, we wait for the broth to start boiling again - a couple of minutes and it's time to take it out. We take out pelmeni, completely decanting the broth. In Siberia, the presentation of ravioli with "yushka" will be regarded as a sign of disrespect, if not an insult. On the table, pelmeni are traditionally served in a large deep bowl - this is a tribute to tradition, so the host demonstrates his benevolence to the guests and the desire to detain them longer. In our time, this method of feeding may not be appropriate, for many reasons, and therefore it is better to serve pelmeni in small, accurate portions, lightly poured with melted butter. But as an appliance to dumplings, you must serve a spoon and no forks! Kicking the dumpling with a fork, this is blasphemy! 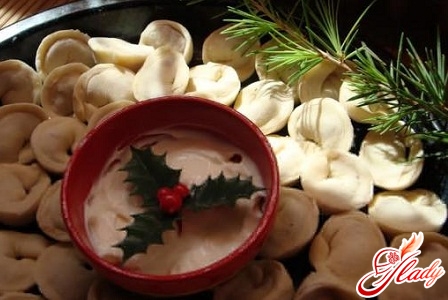 Siberian pelmeni do not eat "dry", they are served with various refueling. Here comes the turn of the onion:

Next, focus on tastes and preferencesguests and household. In any case, once you taste real dumplings in Siberian, you will never buy in the store a miserable semi-finished product, illegally bearing the name - dumplings. Enjoy your meal! The recipe is condensed:

Chicken in sour cream in the oven: cooking methods

Pilaf with seafood: how to cook the original dish

Lazy cabbage rolls in the oven: a recipe that you will like!