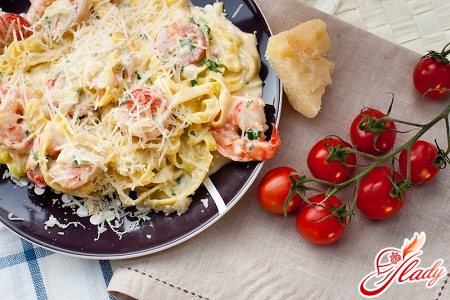 You know how many recipes there arecooking spaghetti? Oh, it's hard to imagine, and not something to remember. They know, the Italians know a lot about this modest dish. And so that such a simple and satisfying dish does not get bored, they prepare it with various additives and sauces. And one recipe from the countless recipes of cooking spaghetti, we are with you today and find out. We will learn how to cook spaghetti with shrimps in a creamy sauce. Do you think this recipe is universal? And here not! Only the recipe for a creamy sauce has many interpretations, and what to say about the ways of making spaghetti with shrimps. Naturally, we offer you not one recipe of this variant of spaghetti in Italian. So, we choose, prepare, try!

Spaghetti with shrimps in creamy sauce

Let's start, as they say, from the beginning and master the basic recipe for cooking cream sauce, and at the same time and spaghetti. Believe me, this recipe is very simple, but the result is unexpectedly spectacular! Ingredients:

Preparation: We clean three garlic cloves and cut them small-finely. Shrimp defrost and clean. Now take the brazier, put it on the fire and pour into it a tablespoon of vegetable oil, let it warm and put the garlic. Fry garlic only lightly. As soon as the garlic spirit goes, put the shrimp in the pan and fry them until light crust. Next, open the package with cream and just pour them into the brazier. Salt and pepper we put to your taste, we reduce fire and leave the brazier with the lid open - let the sauce evaporate. Meanwhile, boil the spaghetti. Do you know how to properly cook spaghetti? To do this, you must first boil the water. Then in boiling water we put a little salt, pour out a spoonful of vegetable oil and dip the spaghetti. If the pasta is too long, then lower them gradually, holding a bunch of spaghetti in your hands. Lower the lower part of the beam into a saucepan and begin to lightly press the macaroni onto the bottom. Under the influence of hot water, the spaghetti will begin to soften and easily fall into a saucepan. Once all the pasta is placed in the water, mix them with a spoon and leave to cook. Ready to be considered spaghetti, which is no longer tough, but still not very soft. As a rule, spaghetti comes already being mixed with the sauce. So, brewed pasta in a colander, let it drain and put it on a dish or put it in portions on plates. Top with sauce and get spaghetti with shrimps in a creamy sauce. Here is such a basic recipe. It will not be superfluous to flavor this dish with fragrant cheese shavings. If absolutely in Italian, then it should be hard Parmesan cheese. 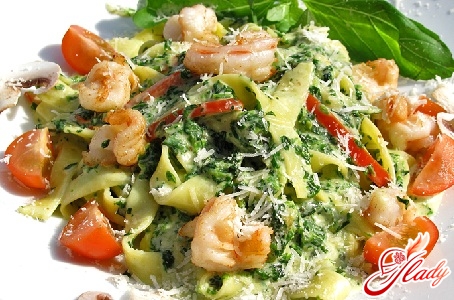 But this is another recipe (though, based onbase) spaghetti in a creamy sauce. This time we will cook them with tomatoes. The recipe, although rather prosaic, is quite suitable for a friendly party and even a small family holiday. Ingredients:

Preparation: We put a pan of water on the fire and let the water boil. Then add the salt and put into the boiling water of spaghetti. Boil them until ready and throw them back in a colander. Pomidchiki mine, we fill with boiling water and release from the upper peel, after which we cut the flesh into small cubes. Shink the onion, grind the garlic. In the pan pour a little and put it on the fire. In the preheated oil we spread tomatoes with onions and garlic, season them with basil and simmer on low heat. While tomatoes with onions are stewed, we will fry shrimps. To do this, we'll clean them, sprinkle with oil, pepper and salted. Then in a brazier on high heat fry the shrimp for three to four minutes. This time will be enough to bring the shrimp to readiness. While we were engaged in shrimp, the tomato sauce should have time to be prepared. Check - if the liquid in the sauce evaporated, then top up the cream, and then immediately put the toasted shrimp. We cook our creamy tomato sauce with shrimps for just two minutes on medium heat, and then we put into it boiled spaghetti. All neatly mixed, sprinkle with chopped cheese and immediately served to the table.

But this recipe for real gourmets. Spaghetti with shrimps in a creamy sauce with the addition of wine. Believe me, it's very tasty! Ingredients:

Preparation: If the shrimps are frozen, we pre-defrost them and clean them. In the brazier we pour oil and put it on the fire. When the oil is heated, spread the prawns into it and quickly fry it on high heat (about three minutes). While the shrimps are fried, peel the garlic and grind three denticles on the grater or through the press, and then add them to the shrimps, after which we continue to fry for about another minute. After that, pour the wine into the sauce, not reducing the fire, let it boil, and then simmer on a small fire for two minutes without covering the brazier with a lid. Next, you need to add cream to the sauce, mix everything neatly and continue to stew it for another five minutes. Now take a sample, put the right amount of salt and pepper, and if desired, add and soy sauce (but this is an amateur). We can assume that the sauce is ready. Leave the sauce with shrimps to insist, and meanwhile boil the spaghetti. Ready spaghetti is mixed with sauce, spread on plates and served to the table. Agree that this recipe requires minimal time and very little effort. 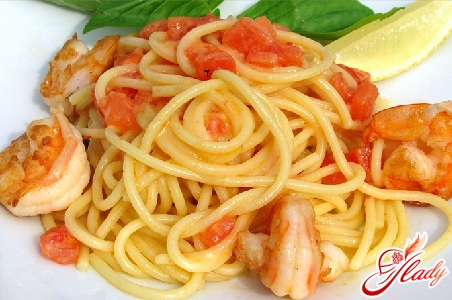 The recipe for this version of spaghetti with shrimps and cream sauce will appeal to lovers of cheese. The sauce gets extraordinarily tender and rich in cream. Ingredients:

Preparation: Boil spaghetti in a traditional way, laying them in boiling salted water, and then throwing it back in a colander. To prepare the sauce, pour the vegetable oil into the brazier (preferably olive oil), heat it and add the garlic cut into large pieces. Fry garlic for two or three minutes, and then take it out of the brazier - we will no longer need garlic. We put shrimp in the resulting garlic oil and fry them for no longer than three minutes on high heat. Fried shrimps are taken out of the brazier and we pour cream into it. When the cream boils, we reduce the heat and add to it the melted cheese cut into small pieces and continue to cook the sauce until the cheese is completely dissolved. It will take about five to seven minutes. While the sauce is preparing, mine and finely chop the greens of dill and spread it into the sauce (after the cheese has dissolved!), And then we put the fried shrimp. A small part of the chopped dill is left. Let's sauce with shrimp and leave for another two minutes, and then turn off the fire. If the sauce is too thick, then dilute it with ordinary boiled water to the desired consistency, let it boil, and only then remove from the fire. We serve spaghetti, spreading them into plate saucers, pouring sauce and sprinkling with the remaining dill. That's how you can cook spaghetti with shrimps in cream sauce in different ways. Choose a recipe and cook. Prepare with pleasure and pleasant appetite to you! We advise you to read:

Shrimps in creamy garlic sauce: we prepare dishes with seafood

Dishes from a chicken breast in a hurry