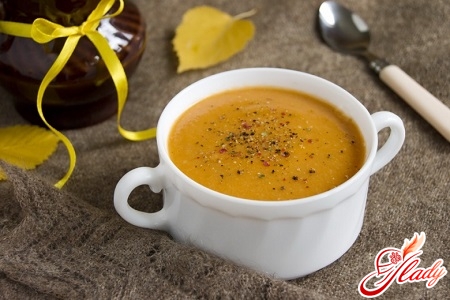 Every housewife from time to time appearsculinary crisis. If this material fell into the hands of a perfect unique woman, who always knows what to prepare for dinner today, we explain: the culinary crisis is when the woman sits in complete prostration with a full refrigerator of food and scrolls her notebook with culinary recipes. In such cases, it is possible to cook soup-puree from lentils, not so bored in our land. It was during the Soviet era that the fruits of the spring plant called lentils were difficult to find on the shelves, but today, at the time of food abundance, one can only fail in search of mammoth meat.

The recipe for lentil soup with precise and understandabledescription is presented to the attention of readers-culinary goddesses. If you decide to cook this dish for the first time, be sure to follow the directions of the recipes. Otherwise, it can turn out not at all what was expected by the housewives for dinner. 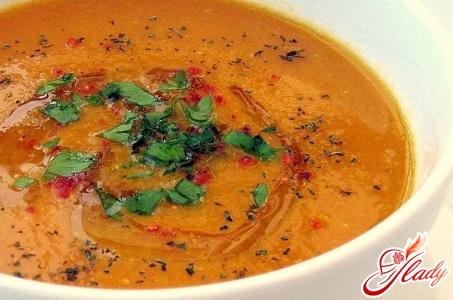 Sounds, of course, menacingly, but nothing ofscarce and delicious on the shelves of the supermarket will not have to be looked for. The recipe is delicious and is designed for two servings. Start cooking lentil soup should be two hours before serving. Yes, it is necessary to tinker with a little, but satisfied faces and full stomachs of the household will fully justify this sacrifice. Another nuance: the used cereals should be soaked in water for several hours before cooking. Required ingredients:

In Turkey, lentil soup cooked onthis recipe is also called wedding soup, however, if you go deeper into history, you can see the discrepancy. Traditional recipe of wedding soup has one rule: instead of beef ribs, the back of the lamb is added. Cereals before cooking should be thoroughly rinsed. A broth requires 1.5 liters. Cook the ribs for at least 1.5 hours, without adding salt and spices. The resulting foam should be removed. In another saucepan, melt a piece of butter, peel and finely chopped onion until roasted. The spoon of tomato paste is diluted with boiling broth and poured into roasting onions. Allow the resulting mass to boil for 2-3 minutes. Salt. Lentil soup requires a lot of salt. With wheat cereals and lentils, drain the water, add the red lentils into a saucepan and mix thoroughly. Then, as soon as possible, you need to add wheat rump. The resulting mass for 10 minutes to interfere as diligently as possible, so that the bottom of the pan, the ingredients are not burnt. After you add half a teaspoon of dried mint and you can sprinkle a little dry thyme. Salt again to taste. Lentil soup should be cooked on low heat, but at the same time a little boiling. It takes about half an hour before the croup is ready. Try to be ready as often as possible. As soon as the degree of readiness of the croup reached its apogee - they turned into mashed potatoes, - the pan is removed from the plate, and the soup is infused for 10 minutes. The prepared dish is served in deep bowls and sprinkled with pepper before consumption. Bon Appetit! 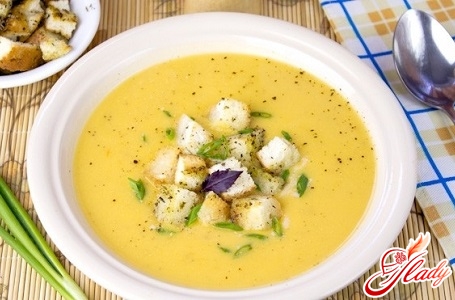 More affordable for cooking at homethe recipe can be read below. Its advantage is that in order to cook it, the same enchanting efforts that it is necessary to apply in the past recipe are not required. This recipe is a home-made variant, every housewife can prepare this dish. Ingredients:

This recipe is a pre-soakinglentils does not provide. After lentils are washed, it should be placed in boiling water. The water will need 2.5 liters. Brewed spring will be about an hour, until it turns into a puree mass. In another saucepan is poured vegetable oil. As soon as the oil has heated up, a tablespoon of flour is added to it, which should be roasted in this hot oil. Then add a tablespoon of tomato paste to this mixture. After 3 minutes of constant consistency stir we add red pepper and mint. Do not spend too long on the fire the resulting mass after adding seasonings, so that the latter did not lose their taste. As soon as the above actions are performed, a pot of fried flour pours out the soup with lentils. Salt to taste and serve to the table. 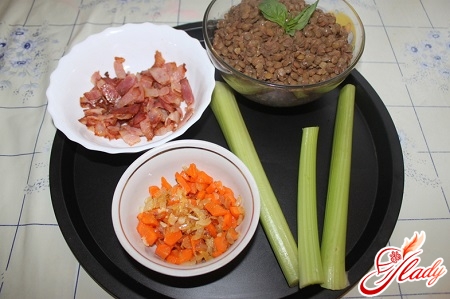 The recipe for this dish has many variations andways of preparation. We present to your attention one more recipe of soup-puree from lentils, to cook, which will not be difficult at all. If, of course, there is a multivark in the arsenal, which has become so fashionable in use among modern culinary magicians. In order to prepare a simple lean soup made of lentils in a multivark, you will need:

Lentils are very healthy, full of plantprotein, carbohydrates and minerals. Many nutritionists strongly recommend using large amounts of lentils. Prepare a soup-puree of lentils in a multivar can be very fast and tasty. To do this on the multivark you need to put the "baking" mode and save small chopped onions and carrots. Once the vegetables are cooked, washed lentils and finely chopped potatoes are added. By the way, this recipe can be supplemented with red sweet pepper, tomatoes and garlic, but this is at the discretion of everyone. Now you should pour all the ingredients with two liters of water, add salt and add two laurel leaves. On the multivark, you should change the regime to "quenching" and cook the soup for 1.5 hours. After the specified time, the soup should be poured into a convenient saucepan and using a blender to turn it into a puree-like mass. Sprinkle with herbs and spices before serving. Lentil puree soup is ready! For those who do not want to spend too much time cooking lentils, there is a quick version of the soup with ribs and lentils. Two and a half liters of water will require 200 g of pork smoked ribs and half a glass of lentils. Cook until half-ready ribs, and then add lentils. Solim, add spices to taste and taste the delicious soup with lentils! Lentils can be used in various dishes, a recipe for soup with lentils can be modified. To add or, on the contrary, to exclude various ingredients also it is possible at own discretion, the main thing - leave lentils, in fact without it it will turn out any not a lentil soup. By the way, it is not necessary to achieve a puree-like state of soup by digesting products. You can just use a blender. Another tip to all workers on the kitchen area - do not handle cooking dishes for new recipes, if you have a bad mood. No matter how absurd it may sound - food does not like scorn. During cooking, assure yourself that the dish will turn out to be excellent, and it will certainly surprise with its magnificent taste!

Borsch in the multivarquet: recipe