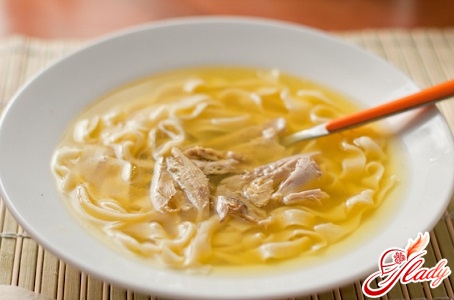 One of the easiest to prepare the first dishesis chicken soup with homemade noodles. Chicken broth surpasses any other meat broth for the content of vitamins and nutrients. Since ancient times it is used as a remedy after the disease. Scientifically confirmed that chicken broth helps to cope with viral and cold diseases. The chicken broth contains the amino acid cysteine, which is able to dilute sputum better than conventional medicines. Fatty substances contained in the broth, have a positive effect on the respiratory tract, helping to cope with nasal congestion. In addition, the use of chicken broth does not give absolutely no adverse reactions, in contrast to the same drugs.

The Benefits of Chicken Broth

The use of chicken broth is also significant whendiseases of the stomach. People suffering from gastritis need to eat chicken broth and meat 2-3 times a week, as the chicken is able to take extra stomach acid from the stomach. Chicken broth helps reduce cholesterol and normalizes the heartbeat, so the broth is also indicated for diseases of the cardiovascular system. From such a useful broth, you can easily cook a delicious and nutritious chicken soup with homemade noodles. 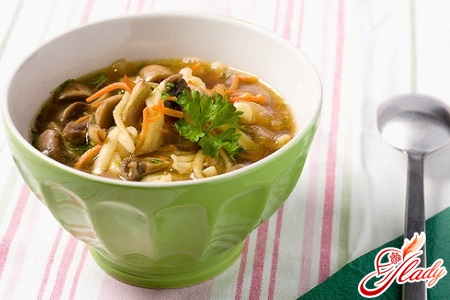 How to cook homemade noodles?

Tasty noodles do not necessarily buy in the store,you can cook it yourself. This is not a very complicated and completely non-waste process. For its preparation you need only flour and eggs. If you only use yolks, the noodles will turn out to be a beautiful yellow color, and the broth will remain transparent during the cooking of the noodles. In a deep plate, you need to beat 3 eggs. If you take only yolks, they will need 2 times more. Eggs can be mixed with a teaspoon of salt, but without salt noodles will not be fresh, it will salivate when it is brewed in salted broth. In the eggs you need to gradually add flour, stirring all the time until the dough becomes so that it will be difficult to interfere with the spoon. Now the dough should be kneaded with hands, first sprinkling the surface on which you will do this, flour. This is the most physically difficult stage in the preparation of home-made noodles, since the dough will have to knead for at least 15 minutes, making considerable efforts. If you do everything right, then by the end of mixing you must get tired. When the dough becomes very dense, you need to leave it to "rest" for 30 minutes, covered with a towel. The next step in the preparation of noodles is rolling out the dough. Since the dough has turned out to be stiff, it is difficult to roll out. To slightly ease this process, all the dough should be divided into 3-4 parts and rolled them individually. It is necessary to periodically sprinkle the table with flour, so that the dough does not stick. Roll out as thin as possible, until transparent, when the thickness of the dough will not exceed 1 mm. Then the rolled dough should be dried, hang it for 20 minutes on the dryer or the back of the chair. Next - cutting noodles. It can be made short and long, for a soup short will suit. To facilitate this process helps noodles, but you can do without it. The rolled dough should be cut into strips 2 cm wide, fold these strips together with a pile and a sharp knife to thinly cut the noodles. Periodically, you need to shake and turn the cut pieces so that they do not stick together. At the last stage of cooking it is necessary to dry the resulting noodles. To do this, a large board or table sprinkle with flour and spread the noodles in a thin layer, leave to dry for 40-50 minutes. If you cook noodles for a stock, you need to dry it longer, until the state when it starts to break. Keep it better in a rag bag. 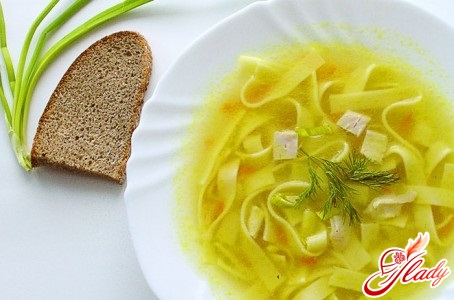 Preparation of chicken soup with noodles

Prepare chicken soup with homemade noodles caneven the beginning mistress. At the same time, it is a very tasty and nutritious dish that you can feed all family members, including children from 1 year old. To make this soup you need the following products: a small chicken carcass or half a large chicken (it's better to take a bird home), 4 medium potatoes, 2 carrots, 2 onions, a large handful of noodles that you made yourself, dill or parsley, 5 tablespoons of vegetable oil , black pepper and salt to taste. Of these ingredients, 13 to 15 servings of soup are obtained. First, you need to prepare the broth: for 1.5 hours cook the chicken on low heat. In the finished broth you need to lower the vegetables cut into strips: potatoes, carrots, onions, and chicken meat, separated from the bones. To give a beautiful color to the broth, carrots and onions, you can pre-fry slightly in vegetable oil. To vegetables, you can add finely chopped Bulgarian pepper, it will add a piquant taste to the dish. When the potatoes are cooked until ready, you can add noodles. It should be cooked for 7-10 minutes. At the same time the soup should be salt, pepper, add greens. A delicious dish is ready!