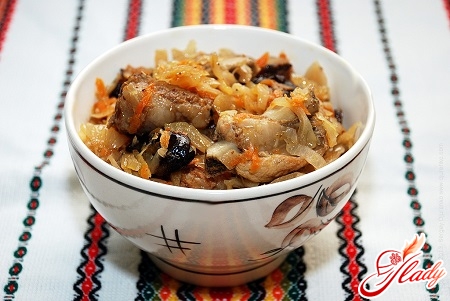 Bigos is considered to be a traditional Polishdish. However, there are legends that the recipe for this dish of meat and cabbage came to Poland from Lithuania, and brought him there Polish king, he's a Lithuanian prince, Vladislav Jagailo. So it or not, now no longer know. But the fact that bigos love in Poland is a fact! A real bigos is cooked for several days in large quantities: it is quenched and cooled, quenched and cooled. Then they put them in a cold place (more often in the basement) and eat for a week, or even longer. But in modern urban conditions, this is not possible. Firstly, there is no underground, and secondly, there is no time to prepare a single course for many days. Therefore, the recipe of the Polish biogas is simplified. But this does not mean that it turns out to be tasteless. 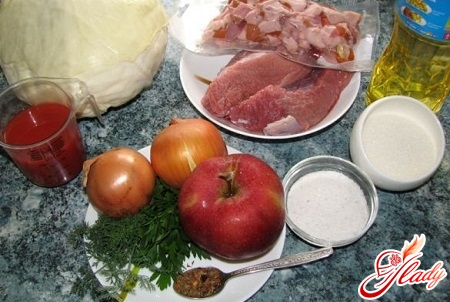 For the preparation of the present biigos of ingredientsa lot is required, the amount is indicated for cooking 6 servings. Let's start with the most important thing - meat. For bigos you need several kinds of meat: 400 g of pork and beef, 300 g of smoked bacon and 200 g of smoked sausage. Many housewives add instead of smoked sausage sausages. But this is wrong, since the real bigos must have a smell of smoked products. The second important ingredient is cabbage. You will need 700 grams of fresh cabbage and 500 grams of sauerkraut. Some recipes assume the use of sauerkraut only, without the addition of fresh cabbage. If you do not have sauerkraut, you need to prepare it in advance. You can, of course, use only fresh cabbage, but then it will not be Bigos. There are two recipes for sour cabbage: with brine and without it. Sour cabbage without brine is prepared very simply. Shred cabbage, grate the carrot. Cabbage well remember with salt, add carrots, stir and leave under the yoke. After a few days, prepare the cabbage for transfer to the jar. To enhance the taste of cabbage, cranberries are often added. When you make cabbage with brine, cabbage is not necessary. You just have to cut the vegetables and pour the brine, which is prepared this way: in 1.5 liters of warm water you need to add two tablespoons of salt, the same amount of sugar and mix. In addition to meat and cabbage, for Bigos you need 2 cloves of garlic, 3 tbsp. spoons of tomato paste, one large carrot or two small, prunes - 6 pieces and 150 ml of dry white wine. Some recipes assume the use of non-white wine, but red, too dry. Sometimes, instead of prunes, add dried apricots or even an apple. In some recipes of bigos there is also a bow, but in Poland this is not added to the dish. If you decide that the onion will taste better, you need 2 small heads. From seasonings according to the traditional recipe, prepare salt, ground pepper, bell pepper (fragrant) - 6 pieces, 0.5 tsp cumin and 1/4 tsp coriander. A classic biogas is prepared in a cauldron. When all the ingredients are ready, you can proceed. Preheat the cauldron and put the smoked chicken cut into small pieces on the bottom. While the fat will be heated from the breast, wash the meat, peel the vegetables and remove the bones from the prunes. If you use a bow, cut it into small cubes, grate the carrots on a grater, preferably a large one, and put the vegetables in the cauldron. While the vegetables will be fried, cut the pork and beef with not very long slices. Put the meat in the cauldron, season with salt and pepper and leave to simmer on low heat. Stew the meat for about 40 minutes, stirring occasionally. Mix well the tomato paste with the wine, add the coriander massaged in the mortar, caraway seeds and sweet pepper and pour the resulting sauce to the meat. Some mistresses in the absence of wine mix the tomato paste with water, but then the dish gets lost its aroma. Thinly chop the fresh cabbage, season with salt, remember and put in the cauldron. Immediately add sauerkraut. If the sauerkraut is acidic, it can be washed. Leave to simmer on low heat. After 30 minutes, add the diced sausage and prunes into the cauldron. If necessary, add a little water and simmer for another 40 minutes. Bigos is ready! You can serve to the table!

The modern version of the preparation of biogas

Every housewife cooking bigos, especially ifshe does not live in Poland, she has her own recipe for this dish. Modern culinary specialists prepare bigos in a multivariate. Ingredients are used the same as for the classic Bigos. In the cup multivarka pour a little sunflower oil, then lay the layers of meat, vegetables, cabbage, prunes, pour all sauce and stew for an hour and a half. After the specified time, turn on the "Baking" or "Frying" mode for 7 minutes. Often the bigos are cooked in pots. To do this, pre-fry the onions and carrots, in a separate frying pan - the meat until light crust appears and stew sauerkraut. Then all the ingredients are laid out in pots, covered with a layered dough and cooked in the oven for an hour at 200 degrees. Non-meat lovers cook big fish with fish. Good with cabbage is combined with pike perch. Since the preparation time for pike perch and cabbage is different, the cabbage is stewed separately with the rest of the ingredients, and the fish is fried in small pieces in flour. 15 minutes before turning off, the fish is added to the cabbage. Some hostesses add favorite foods to biigas: raisins, Bulgarian pepper, mushrooms. What else to cook for bigos? If you want to surprise and please loved ones, prepare a whole dinner of dishes of Polish cuisine. Bigos is considered a dish for the second. You have to prepare the first, drink, salad and dessert. Let's start with a salad - potato with beans. The recipe is very simple. While the bigos are stewing, boil 4 small potatoes in a uniform and 300 g of string beans. Potatoes cut into cubes, if the bean pods are long, cut them in half, salt and season with mayonnaise. Salad ready! Let's go to the soup. We will prepare tomato soup with cucumber. For its preparation you will need 1 kg of tomatoes, 2 tbsp. spoons of rice, 1 liter of broth and 100 g of sour cream. Cut the tomatoes into small pieces, boil and rub through a sieve. Add the broth and rice to the resulting tomato mass. Cook the soup over low heat for 20-30 minutes until the rice is ready. For a couple of minutes before turning off add the sour cream. In the soup bowl, cut the cucumber rings and pour the cooled soup. For dessert, you can make a cake with a cherry. His recipe can surprise you: a pie is prepared not from dough, but from wheat bread! Lubricate the baking dish with butter, sprinkle with breadcrumbs and lay on it slices of wheat bread without crusts, before dipping them into a mixture of milk (half cup), eggs and vanilla sugar (half cup). On the bread lay the berries of cherries without pits and sprinkle with sugar. On the berries, place the second layer of bread and fill with the remaining milk mixture. Bake the cake in the oven for 20 minutes. Finally, we turn to the drink - pumpkin jelly. 100 g of purified pumpkin grate. Dilute 7 g of starch in water and pour it into 130 g of hot milk. Add 4 teaspoons of sugar and 1 teaspoon of vanillin. Add the pumpkin and cook for 10 minutes. Recipes of Polish cuisine are different from the usual dishes. But this is a terrific way to diversify your table and get acquainted with a part of the culture of another country, not so far from us.

Pasta Bolognese: the recipe for cooking

Pork loin in the oven