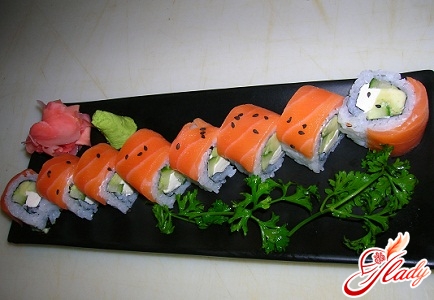 A bit about sushi

This delicacy - if you can say so aboutdelicacy - was invented in Japan. In connection with the peculiarity of climate, the original products of the national Japanese cuisine are rice and seafood. The use of raw fish, rice and various ingredients gave a variety of dishes under the general name of sushi. Often, the name of the land gets by the ingredient, which distinguishes it from other types of dishes. For example, sushi with Philadelphia cheese is called sushi Philadelphia, whose photo is located below. 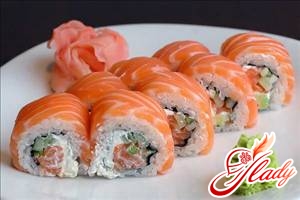 Cooking method: This recipe for sushi Philadelphia is designed for 6 servings. Tobiko's roe and lemon in the Philadelphia sushi will add sophistication to the taste of rolls. First of all, it is necessary to cut out the best part of the salmon fillet with a width of about 10 cm. Then cut the salmon fillet so that there are large rectangles.

Rinse and boil rice. Avocado, apples and cucumbers to peel and chop.

Take the food film and put it on the mat. Put on the film 1/2 pc. sheet of seaweed noria, shiny side down, and moisten with rice vinegar. 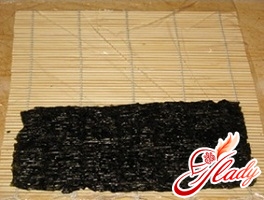 The finest layer lay the rice so that on one side a little bit of rice, on the other - algae. 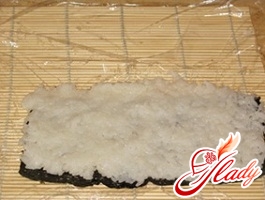 Bending the mat in half, cover the rice, turnand deploy. With such manipulation, rice will appear from below, and the algae of the noria at the top. Then top with creamy Philadelphia cheese. Put pieces of cucumber, apple or avocado on it. By the way, there is a rule: in sushi or rolls Philadelphia can not use more than two fruits (vegetables).

Collapse the mat to make a roll.

In the upper part lay out pre-cooked pieces of salmon. Then again, fold the mat to form a roll. 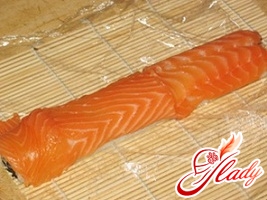 Then you need to cut the roll. To do this, moisten the knife in cold water. Cut the roll into 6 identical pieces. 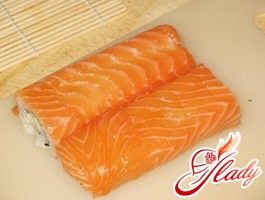 Before serving, lay out sushi rolls with creamy Philadelphia cheese on a plate, add ginger and vassabi to taste, pour in soy sauce, decorate with tobiko caviar. Bon Appetit!

Cooking method: Rice to sort out, pour water and put on a weak fire, bring to a boil, cook for 10 minutes, remove from heat and leave, covered with a lid, for 20 minutes. 2 tbsp. spoon of vinegar, sugar and 1 teaspoon of the sauce melt, stirring over low heat until the sugar is completely dissolved (not to boil). Prepared syrup pour rice and cool the resulting consistency. Cut the fish into thin layers so that the size coincides with the size of the algae. For wetting your hands, you must prepare a water cup with 2 tbsp. spoons of vinegar. Prepare Sushi Philadelphia at home: on the mat lay a seaweed, a layer of rice and put in the middle vassabi. Cover with fish and turn over. On the downside, smear the Philadelphia cheese and roll the roll. Before serving, decorate sushi with Philadelphia sesame seeds. Bon Appetit! We advise you to read:

Fish in an omelette: unusual recipes

Omelette: a recipe in a frying pan

What can you make from cottage cheese?

Potatoes baked in the oven