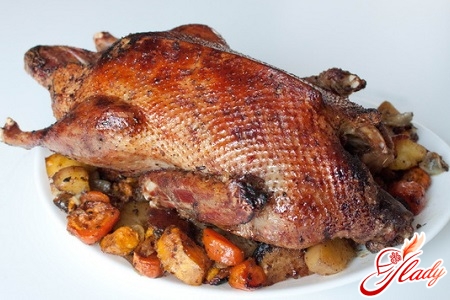 Duck with buckwheat porridge - very old and veryRussian recipe. In our traditional kitchen in general, porridge was always in high esteem, and buckwheat - in a special. The porridges were eaten just like an independent dish, filled with porridge for pies, porridges were put in soup and soup, making them so thick and nourishing. And, of course, meat and poultry were cooked with porridges. And those oldest times buckwheat is considered one of the most suitable side dishes for fatty meat. A refined recipe for duck with buckwheat in general turned from everyday into a holiday recipe. And today the duck, stuffed with buckwheat and baked in the oven, is prepared only for the big holidays. And what to do? And the duck today is not so easy to buy, and to cook it - it's still troublesome. However, we are not afraid of experiments, and we are always happy to prepare new dishes. True? Then we master the recipe baked in the oven duck with buckwheat and try to cook this delicious dish. 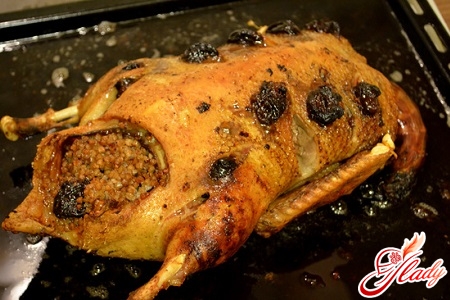 Duck with buckwheat and prunes

If the duck recipe with buckwheat is the most famousof all the recipes for cooking ducks, then a duck with buckwheat and prunes, cooked in the oven - its most popular option. We'll start with it. Ingredients:

Preparation: Duck carcass is previously thawed, if it was frozen. Do this before the cooking, defrosting the duck in a natural way, placing it on the lower shelf of the refrigerator for the night. The defrozen bird is burned, we remove the stumps from the feathers and carefully from the outside and from the inside. Now the duck needs to marinate. For this, a tablespoon of salt is mixed with an incomplete teaspoon of black ground pepper and passed through the press with three or four cloves of garlic. With the resulting mixture we rub the bird first inside, and then outside. We wrap the carcass in a food film and clean it in the refrigerator for at least two hours. If you are a fan of spicy dishes, then you can add a little mustard to the marinade mixture. This, by the way, will help make meat safer and softer. Instead of mustard in the marinade, you can put a tablespoon of mayonnaise or add any spices (to your taste or intended for cooking birds). While the duck is marinated, we will prepare the filling for minced meat. Buckwheat boil until incomplete preparedness, and prune the prunes. Carrots will be washed, brushed and cut into small pieces or straws. Peeled onion finely chopped. Fry carrots with onions in vegetable oil and mix with boiled buckwheat and prunes. We put salt and pepper to your taste. Now we take out the duck and stuff it with prepared stuffing. So that the filling does not fall out of the upper opening of the carcass, the skin from the neck is curled up and tucked inside the bird or just sew this hole with a strong cotton thread. The incision on the belly of the duck is also sewn and we put the carcass on a greased baking sheet. Bake the duck in the oven, heated to 180 degrees for about two hours. During the baking process, the bird is not necessary to turn over, but it is necessary to periodically water it with grease. Readiness is verified by making a puncture at the junction of the duck leg with the trunk. If a clear juice appears from the puncture without blood, then our stuffed duck is ready, and it can be taken out of the oven. From the ready bird carefully remove minced meat, lay buckwheat and prunes on a dish, and on top we lay out the cut duck cut into pieces. 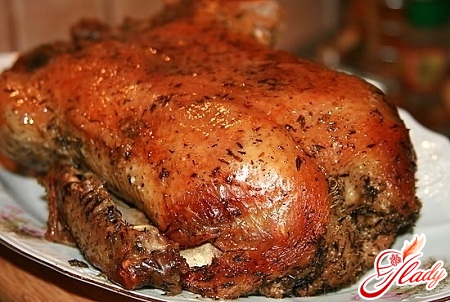 Duck with buckwheat and mushrooms

Another recipe for cooking duck with buckwheat. Only this option also with mushrooms, and we will cook it not in the oven, but on the stove. Ingredients:

Preparation: The duck carcass is singed off, mine, we are released from excess hemp and boil almost until ready. While the duck is brewing, my mushrooms and cut them with plates. Shred the onion in vegetable oil, and then add the mushrooms to the onions and continue to fry until the mushrooms are ready. Boiled duck chop into small pieces and put it on the mattress. Add to it onion-mushroom fry, pepper, put salt to taste and mix. Rinse the buckwheat groats over the duck meat and pour the broth, left after cooking the duck. Broth so much that he covered buckwheat to a height of four to five centimeters. We cover the litter with a lid and put it on a slow fire. The duck should be cooked under the closed lid (like pilaf). Note: If in the process of cooking buckwheat took away all the moisture, but is not yet ready, then just add a little more broth. Try some recipe for cooking duck with buckwheat. By the way, the stuffed duck can be cooked in the oven and in the open way, and in a whiting, and in foil, and in the sleeve. And the filling can be cooked to your taste, supplementing it with toasted ducks, mushrooms, and even raisins. Here you need to focus only on your culinary preferences. Cook with pleasure, and a pleasant appetite for you! We advise you to read: