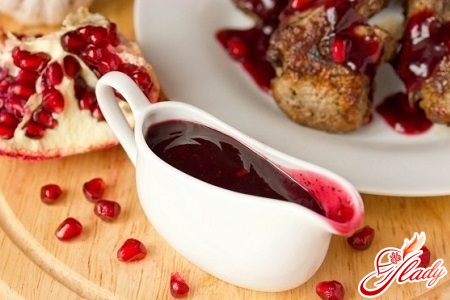 Pomegranate sauce can be used as a spice tomeat, fish or as a marinade to ice cream, salads, dessert. What is this sauce so attractive to cooks, not only Russian but also foreign? First of all, the use of pomegranate juice is already an indication that the content of any additives or preservatives in the dish is absent, and the recipe for the dish with its use will be successful. Plus, the pomegranate is the carrier of iron, it's not for nothing that many doctors prescribe the use of pomegranate juice for raising hemoglobin. Also, women who are trying to get pregnant, use pomegranate sauce or juice in food is simply necessary. For men, it is also very useful, as juice helps maintain an important functional life. Pomegranate sauce for meat contributes to the absorption of iron in the body of any person, as well as meat itself is digested much better. 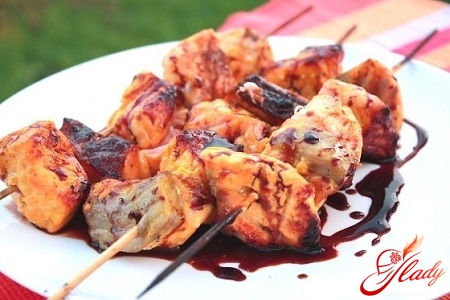 What are the taste qualities of this sauce?

This, of course, primarily depends on thedishes that you choose for cooking. Most often the taste is sweet and at the same time tart. Sauce supplies the dish with useful substances and does not let you tear yourself away from eating food. In addition, pomegranate sauce has a provocative and at the same time pleasant red shade. A bright representative of such sauces is the Azerbaijani Narsharab. We will begin with it, but first it is necessary and important to properly prepare the dishes for use. From the dishes we will need: 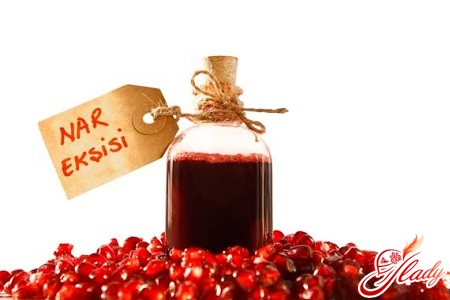 Pomegranate sauce that came to us from Azerbaijan - Narsharab Necessary ingredients for 1 kg of sauce:

Cooking method: Pomegranate seeds are placed in a saucepan and cooked, the consistency should be similar to a jar. We transform the mass into puree with the aid of a wooden crush. This stage must be continued until the bones become white. Through a colander or strainer strain the resulting mass, the remaining pure juice continues to cook. As a result, the mass should double, in appearance should resemble sour cream, only, naturally, bright color. Cook about 20-30 minutes, then add the necessary spices and cook for another 5-10 minutes. That's all. The sauce is ready for use. This recipe is considered the easiest to prepare, but the result is very tasty. It is advisable to use the entire pomegranate sauce within 10 days (store it only in the refrigerator). Pomegranate sauce with apple juice Ingredients:

Cooking method: Initially, it is necessary to completely clean all 3 grenades. Then we need to make juice from their grains, and then the resulting mass must be filtered. The resulting mass is mixed with the juice from apples, the mixture is poured into a pan and heated (but in no case can not boil!). Next, you need to add previously prepared seasonings (except starch), do not forget about sugar. The whole mix is ​​stirred and returned back to the fire. Now we bring to a boil, in parallel we add starch, do not forget to stir to prevent the appearance of lumps. Everything, the sauce is ready. This sauce can be used both in warm and cold. In this case, the combination of pomegranate and apple will give your dish a unique taste, and you will be presented with an unforgettable pleasure. As already mentioned above, the use of this sauce is possible with any products: meat, fish, ice cream and so on. Here are a few recipes. 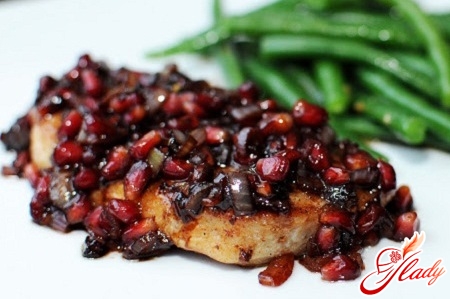 Recipes of dishes with pomegranate sauce

Cooking method: Meat, if it was frozen, it is necessary to defrost, but not to the end, so it will be easier to cut. Cut the meat with squares about 2 by 2 cm, then transfer the resulting pieces into a cup, where everything is poured with pomegranate juice. Next, we leave the hour at 2, so that beef or veal absorbs all the juices into itself. After the end of two hours in a heated frying pan with butter, fry all the meat without the marinade until the caramel crust forms (do not forget to stir to avoid burning). We take the dishes for baking and place all the fried meat (beef should be black), after which we start to prepare the marinade. To do this, first cut the onions (if you like rich onion, then cut into rings or half rings), fry until golden crust appears, then put the flour, add about a liter of water, mix thoroughly, add salt, pepper, greens and mix again. Next, let's brew for 5-10 minutes and send the marinade to the meat. The resulting unfinished dish is closed with a lid or foil and put in preheated to 200 ° C oven for 40 minutes. Somewhere 20 minutes before the end of cooking, take out the dish and remove the lid or foil, then put it back. Bon Appetit! This recipe is good because the meat gets soft and just melts in the mouth. Do not forget about the rich taste. Salmon in pomegranate sauce Ingredients:

Cooking method: To make sauce for this dish, we need juice (pomegranate), vinegar and honey. Mix everything and put the mixture on for 10 minutes, then add the previously prepared spices, salt and oil. The prepared mass must be thoroughly stirred. For a dish, we need 120 ml, so this part is cast and put in the refrigerator. Next, take the salmon fillet and salt it and pepper, then spread it into a bowl (preferably ceramic or glass), in this dish it will be marinated. Fill all the fish with marinade and leave for 20 minutes in a cool place. After the time has passed, we fry the fish from two sides. To decorate the dish, we need a flat plate, we lay out washed salad leaves, add the remaining pomegranate sauce, sprinkle with greens and pomegranate seeds. All! The dish is ready! This recipe is very popular in Eastern Europe. Cheesecake with pomegranate sauce Ingredients:

Cooking method: We take a rectangular shape, we cover it with foil. Gelatin in a separate container filled with cold water. Cheese and orange peel rub on an average grater and mix with vanilla and powdered sugar (1 tablespoon). Proteins with a mixer or whisk should be well beaten. Pour the remaining powdered sugar into the resulting mass, stir until thick consistency is obtained. For 1-2 tablespoons add the resulting mixture to the cheese, stirring. Pour the juice into an enamel saucepan and warm it up a bit, add gelatin to the juice, mix thoroughly and let it sit until the mixture cools down. Mix both the resulting mixtures, put almonds, cherries and dried apricots (everything should be chopped finely). The resulting mass is transferred to a pre-prepared form, cover with foil. Leave it in the refrigerator for the night. After warming the juice, add sugar. Starch is bred with cold water (2 tbsp.). Once the mass thickens, you need to stop cooking. Leave in a cool place until completely cooled. We spread the cheesecake on a dish, pour a pomegranate sauce on top, sprinkle with the pomegranate seeds. Dessert is ready for use. This recipe is very popular in America. On this all, a pleasant appetite and the very best!

Plum sauce for meat: a recipe for cooking

Sauce for spaghetti with mushrooms: recipe