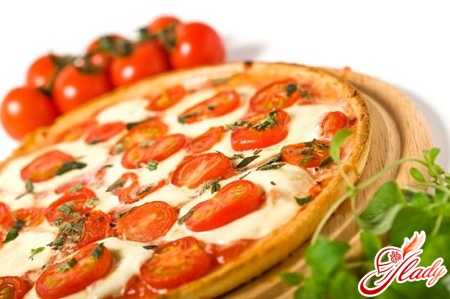 The history of cooking is inextricably linked with storiescountries and peoples. And that's what is remarkable: every well-known and respected dish has its own history, and even not one. For example, the famous Italian pizza Margarita. So you know why it's called this way and with what big names is connected? The name of this pizza is due to the wife of the King of Italy Umberto Margarita of Savoy. One of the versions of the origin of pizza "Margarita" claims that its author was the owner of the most popular pizzeria of Naples Rafaello Esposito. According to another version, this pizza for the queen was prepared by his wife Rosina, and the third version gives authorship to the cook Pappino Brandi. By the way, the latest version found documentary evidence in the form of a royal charter issued by Pappino. Be that as it may, pizza is named after Margarita of Savoy and differs from all other pizzas in that it is colored like an Italian flag: green, white and red. Here is a patriotic pizza - the food of the poor with the name of the queen and the colors of the national flag. And we need only learn the recipe for its preparation and assess the appearance and taste.

It is believed that the recipe for the classic "Margarita"most simple, and its calorie content is so low that pizza is "safe" even for those who are on a diet. However, the low caloric content of pizza - a controversial statement, after all it's baking. But the composition of the filling is really quite dietary. To prepare the classic "Margarita" we will need very specific ingredients:

Preparation: To prepare the dough, mix the dry yeast with sugar and fill them with four tablespoons. Stir the spoon and leave in a warm place for about fifteen minutes. During this time the yeast will work: the cup will foam and rise with a "cap". Then we mix the sifted flour with salt, lay it in a bowl in a bowl, and in the center of the hill make a small depression. In this recess we pour out the spit, vegetable oil and, gradually pouring the remaining water, we knead the dough. The dough should turn out to be dense, but soft, so the amount of water may differ slightly from the one indicated in the recipe (in different flour a different amount of gluten). Prepared dough cover with a towel or food film and leave for half an hour to come up. While the dough rises, you need to prepare the filling. To do this, slice tomatoes and balls of mozzarella cheese, and cut the basil leaves finely. Approached the dough, which should "grow" in half, lay out on the table and oboem, then form a round cake from it, move it to a baking sheet covered with baking paper, and stretch the arms to the desired size. Remember that the basis for pizza should not be too thick - five to seven millimeters will be enough. The dough is smeared with olive oil, spread out on it circles of tomatoes and cheese, sweet pepper and salt, and top with basil and parmesan cheese. Once more, we will sprinkle the pizza with olive oil and send it to the oven for twenty minutes. Note: Some landladies advise before baking to give the pizza stand for another fifteen minutes. During this time, the dough will have time to rise again, and the pizza will turn out softer and delicious. 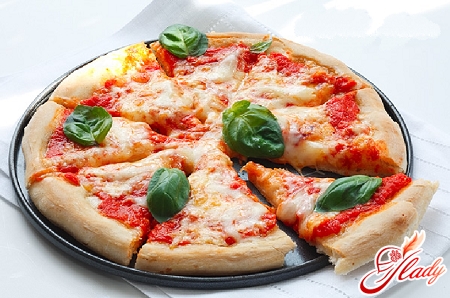 The recipe for the classic "Margarita" is far from beingthe only option of this famous pizza. And if the composition of the filling is practically unchanged (tomatoes, cheese, basil), then the ways of preparing it differ greatly. We offer you the recipe "Margarita", which includes canned tomatoes. Ingredients:

Preparation: We prepare yeast dough for pizza according to the traditional variant: flour, yeast, water, oil, salt. But the recipe for the filling is special: we need to prepare it in the form of a sauce. To begin with, you need to remove the canned tomatoes from the jar and peel them from the peel (if this is not done, then the skins of the skins in the sauce will spoil the taste and look of the ready pizza). Then you need to cut (or grind in a blender) tomatoes and put them in a frying pan with preheated olive oil. Let the tomatoes boil, add salt, garlic, sugar and cook the sauce until it thickens. Then you need to do the following. Cover the baking sheet with baking paper or simply grease it with vegetable oil, put the dough on a baking tray, form a round pizza base from it and grease it with plenty of sauce. Will only pour the pizza grated cheese on a large grater and bake in the oven. Note: This recipe is one of the variants of pizza sauce. And to make such sauce it is possible both with canned, and with fresh tomatoes. 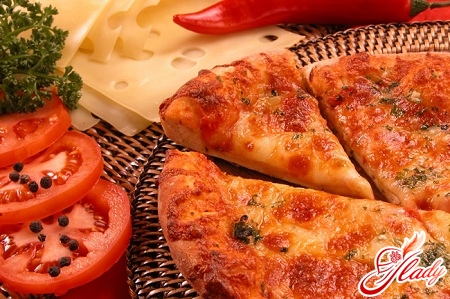 Any recipe of national cuisine sooner or lateradapts: it is not always possible to find original ingredients, and not everyone will like them. Margarita is no exception. At us in the country of a special difference between cheeses yet do not see. Especially when it comes to cheese for pizza. For our inexperienced taste is good pizza with any cheese. Therefore, many do not bother with the search for special cheeses (Parmesan, mozzarella, ricotta) and add to the pizza any hard cheese. Ingredients:

Preparation: To cook the dough, we will fill the yeast with three tablespoons of sweetened water and let them come up (foam and rise). Mix the flour with the salt, add the same olive oil and yeast, and then, gradually pouring water, kneading a dense soft dough. Leave him to ripen for another half an hour. Before you cook pizza, we will wash tomatoes and cut them with rings, and grind the cheese on a grater, and grease a baking sheet with vegetable oil or cover with baking paper. From the dough, we will form a round or rectangular base for the pizza and put it on a baking tray, and then we grease the dough with butter, spread out the slices of tomatoes and sprinkle it with grated cheese. Then we put a baking sheet with pizza in the oven, bake for twenty minutes, and decorate the finished pizza with basil leaves. As you can see, it's very simple to cook a pizza "Margarita", it's not for nothing that its recipe is one of the most famous pizza recipes. Therefore, prepare classic Margarita with mozzarella and parmesan, with sauce or fresh tomatoes, and if you want, try the Russian version of the famous Italian pizza. Better yet, try all the recipes and, as they say, feel the difference. Enjoy your meal! We advise you to read:

Fritters from courgettes and apples: a simple recipe

Pancakes with caviar: arrange a holiday for yourself