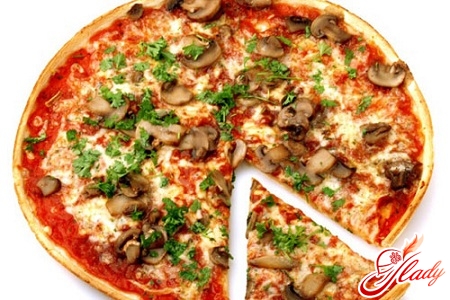 Pizza is loved by everyone. Why? Tasty, varied, which means that everyone can choose the filling to your liking. If you master simple tricks and learn some secrets, then prepare this popular dish of Italian cuisine on the shoulder for everyone. After all, for the filling you can use everything that is in the refrigerator. Pizza perfectly coexist sausage, ham, vegetables, cheese, olives ... Pizza with chicken and mushrooms is very tasty. Pizza is identified in the minds of everyone with Italy, and even more accurately - with Naples. This southern city is considered the birthplace of a wonderful flat cake filled with tomatoes, mozzarella cheese and spicy herbs. However, as in the case of pasta, the story was not so simple. Something like pizza, according to numerous historical sources, was prepared by the inhabitants of Ancient Egypt, and Indians, and Etruscans, and the ancient Greeks. However, for us today it is hardly important. It's great that there is pizza, but it is prepared everywhere, even in Japan, which is known for its attachment to preserving national traditions in all spheres of life, including nutrition. But even the Japanese could not resist the pizza. Is that because of the habit of consuming sea life, they mostly cook pizza with seafood. I must say, each country uses its favorite ingredients for filling: in India, curry, in Brazil, green peas. But the main components remain unchanged - dough, tomatoes, cheese. By the way, the dough can be thick and thin, but it's necessarily a yeast dough, and the thickness of the cake depends on the cooking technology. Accordingly, baked thin pizza faster, and fillings on it put less. But from this it does not become less delicious - a delicate crispy dough with a crusty crust that is still yummy! In general, for that very considerable period, during which mankind eats a cake with filling, there have been no fundamental changes in the preparation. True, bake pizza today is not at stake, as it was in ancient times, but in modern electric and gas furnaces. However, the most delicious and expensive pizza baked by all means on wood. The recipes for pizza dough are probably the same as there are pizza in the white world. And every pizza-yolo (as in Italy called the master of pizza making) keeps it a secret. With the test it is worth experimenting, and when you achieve the desired result, you can assume that you now have your own pizza test recipe. What else is important to know for making delicious pizza? The correct balance of ingredients is very important - one product should not suppress another, on the contrary, they should "make friends", creating a harmonious combination of tastes. And further. All foods must be fresh, frozen ingredients kill the taste. That, in fact, that's all. And although you can talk about pizza for a very long time, we'll move on to the practical part - to the recipe. 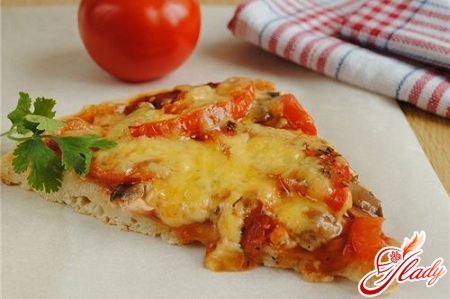 Method of dough preparation Sift flour,add yeast, salt and sugar. Make a deepening and slowly pour in warm milk, kneading a loose knead. Leave a bowl of dough in a warm place for about an hour, so that it rises well. After that, hamper, properly remove and leave for another time. Method of filling We need two frying pans. On the same fry in olive oil chicken breasts along with the spices and chopped half of the onion. Wash and cut the mushrooms into frying pan in a dry frying pan until the moisture evaporates, and then combine them with the fillets, salt and pepper. Tomatoes, previously peeled, cut into thin plates, the remaining onion - half rings. Grate the cheese on the grater. Preparation of pizza Roll out the dough and place on a baking sheet covered with baking paper. Generously grease the cake with spicy ketchup, distribute chicken with mushrooms evenly, top with sliced ​​tomatoes and onion, sprinkle with grated cheese. Bake in an oven, heated to 200 degrees, for 20-30 minutes. Note. You can use the breast, cooked with spices, you can replace the fillet with chicken mincemeat - it's all up to you. Mushrooms can be used raw, but it should be taken into account that they heat up too much during heat treatment, so that the dough is not properly baked. Bon Appetit! We advise you to read:

Bread rye in the oven: recipe

Carrot pie in the multivariate: recipe

Pancakes on yeast: the recipe is simple

The recipe for pancakes with holes, delicious and fragrant