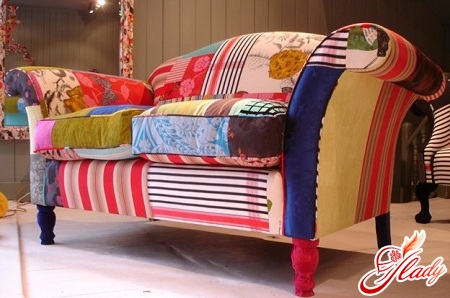 Oh, this is a beautiful and incomprehensible word "patchwork". What does it mean? And they call this quirky word patchwork. From English "patchwork" is translated as "work with a flap". For needlework patchwork is characterized by a special technique, in which colored pieces of fabric are sewn into whole canvases, and then they are made of various interesting and useful things (blankets, bedspreads, pillows, towels and even clothes). Patchwork is experiencing a second birth today, becoming unusually popular. However, patchwork is not a novelty in the world of needlework. It is known from very old times and is considered one of the forms of folk art.

From the history of quilting

Initially, this kind of needlework appearedsolely for reasons of economy. Beautiful factory fabric (in contrast to homespun cloths) was considered a luxury. So they even used the smallest scraps left after sewing clothes. In Russia, patchwork was very popular in the villages, where outfitted quilts and clothing were sewed from colorful scraps. In Japan, sewing from rags also had a sacred meaning. A symbolic gift to a significant date (66, 77, 88, 99 years), for example, was considered to be a kimono sewn from the same number of silk flaps. And the homeland of patchwork was old good England, where, after the ban on the sale of Indian calico, the idea of ​​quilting was realized. However, the history of this handicraft is even more ancient than it may seem. For example, the most ancient example of this work is a fragment of an ornament made of pieces of skin. This exhibit is kept in the Egyptian Museum, and dates back to 980-m BC. Another example of patchwork sewing was discovered in the "Cave of Thousand Buddhas" in China. This carpet, sewed from rags clothes pilgrims, and the age of this creation has passed for a thousand years. The creative component of patchwork

Quilting, of course, folk (evennationwide) invention. And patchwork itself is a purely English-American concept. This folk art today has become a recognized kind of arts and crafts, and like any other art, patchwork is a creative process. First appearing in England, patchwork then safely moved to the New World with the first settlers, and it was there that he began to develop and improve. If the first patchwork was sewed for the sake of economy, then gradually the patchwork began to lose its utilitarian significance, turning into a real art with its own laws, methods and artistic features. Patchwork has its own technique, based on the principle of mosaic. The patchwork technique is characterized by the principle of drawing patterns and ornaments from geometric figures. The main elements from which the canvas is made in the patchwork technique are squares, stripes, triangles and regular polygons. And how many drawings can be invented from such figures - even difficult to imagine. However, the names of patchwork patterns speak for themselves:

And this is only a tiny part of the already well-known patternsfor products made in patchwork technique. Meanwhile, the process does not stand still, and the masters come up with more and more schemes for patchwork sewing. Each flapper has its own artistic flair, its own understanding of beauty and harmony. However, for the patchwork technique, there are rules for combining colors. Actually, speaking, the simplicity of man-madeThe art of patchwork is both explicit and imaginary. On the one hand, there is nowhere else: he came up with (or chose) a pattern, cut out shreds, and sewed them into a whole canvas. But you have already realized how difficult this pattern is to come up with how difficult it is to pick up color-matching flaps, and even the work with patchwork techniques is laborious and tedious enough. But no real scoundrels will scare! And if you are a creative person, it's simply a sin to refuse such a wonderful opportunity to realize your creative potential. Patchwork will help you in this. Dare! We advise you to read:

Crafts from cockleshells own hands

What are some hobbies and hobbies?

Beads with your own hands. How to make a stylish decoration yourself?

How to make a soft toy with your own hands?