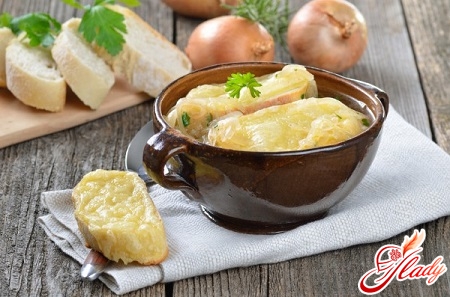 Soup as an independent dish appeared no morefive centuries ago. Historians attribute this fact to the appearance of dishes suitable for cooking food products. However, even when there was an opportunity to cook, and it happened thanks to a stone pot, the broth was most often not used. Yes, and the word "soup", for example, in Russia learned only under Peter I. Before that, the Russian people ate only soup, which is the onion soup, whose recipe has undergone significant changes for today.

From the history of onion soup

Not surprisingly, the classic onion soup -a dish of French, because in Europe (France, Germany, Italy), soups became widespread in the XV century. From there, the Latin name is "suppa", which literally translates as "bread soaked in broth". Only China was ahead of Europe, where soups entered the diet a hundred years earlier and cooked them in earthenware. In the everyday diet of other nations, this liquid, nutritious dish began to appear only in the XVII-XVIII centuries. Although the recipe for today's popular onion soup is also closer to the version of the XVII century. In Russia, at first, they called soups only liquid overseas dishes, then this name passed to traditional soup. Chowder in the nobility was unacceptable, and for a long time was considered peasant food. But the legend that told the world about how the onion soup appeared, gives primacy to this "invention" to the very king of France - Louis XV. Allegedly, after going hunting, he did not find other ingredients in his hunting suite, and he had to cook a soup of bulb, butter and champagne. Subtlety of this story today, no one remembers. Perhaps cooking onion soup, he fried onion and poured it with water, and champagne simply accompanied the dinner, and maybe the champagne followed the onion into the bowls to make soup. Yes it does not matter, but the legend was passed from mouth to mouth and certainly increased the self-esteem of poor Frenchmen in their own eyes by the fact that they absorb the "royal" soup. I must say that the true recipe for a pottage really only involves one ingredient. It can be potatoes, onions or cabbages. Later, after all, they began adding other vegetables to onion soup, but so that they did not "eclipse" the taste and flavor of the main product. Today you can count a good hundred recipes of onion soup for every taste. In France, as a symbol of the country, it stands alongside the frogs' feet, French wine, oysters and cheese. Every self-respecting restaurant first of all will offer its guests this once-poor meal. 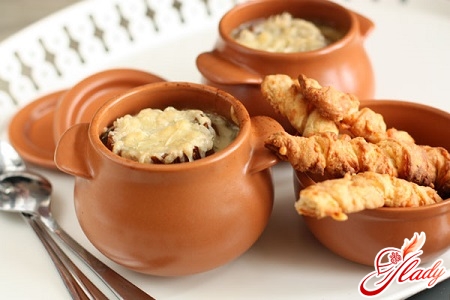 The secret of cooking medieval soup

No matter how varied the recipesmodern cooking, but if you say that onion soup is akin to a soup, then the correct soup is cooked without meat. At first glance, such food can cause bewilderment - what is there to cook? He threw the onion or potatoes into the water - that's ready. However, not all so simple. The main secret lies in the passage of onion, which must be brought to a ruddy color, not overdried and not overcooked, but crystallized. This is done in a cast-iron frying pan with a thick bottom on a slow fire. You can not increase the frying temperature for the speed of cooking, the onions should be roasted for at least half an hour. The highest "pilotage" in this case is considered an hour pass of onions. You can add a little flour to the onion and, without transferring to another container, pour water. Now, in order not to distort the meaning of the concept of "suppa", bread crusts or toast are relied upon. If cheese is available, onion soup is sprinkled in grated form, you can also sprinkle croutons. For a long time this soup was prepared not in a large vat, but in a small bowl, from which it was eaten. It was believed that excessive transposition and transfusion of broth could harm the taste. It is better after cooking to give a little brew under the closed lid. Here's a simple recipe. It is clear that the modern French onion soup is significantly different from the above recipe and is prepared in most cases on a meat broth with the addition of a variety of spices, wine, butter, garlic, mushrooms. Today the idea of ​​onion soup has spread so much around the world that in search of a culinary masterpiece one can find onion soup not only in French national cuisine. Distributed recipes of English, Italian, Spanish, Bulgarian soup with the addition of a large number of onions. 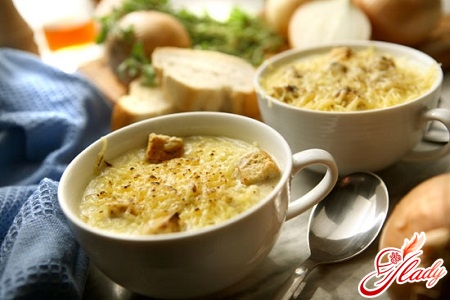 Prepare onion soup in French, given the modern recipe, you can read:

I must say that this number of productsis calculated on 4 portions. First, fry the crushed onions and garlic in butter for at least 30 minutes, as already mentioned above. Passevka occurs with constant stirring. Then the onion is savored with herbs and filled with wine. The dishes should be left open and bring the contents to almost full evaporation of the liquid. After this, it is necessary to pour the ready-made meat broth and salt. While onion soup is brewed, it is possible to prepare a few dried bread beforehand, cover them with slices of cheese and bake in the oven until the cheese layer melts. For those who are not a supporter of using alcohol to make soup, you can offer a classic onion soup. In this case, you need to use the same ingredients as above, except for wine. In addition, only a couple of tablespoons of wheat flour are needed. Onion is browned to brown, mixed with spices and flour and poured with broth. After this, another 30 minutes to cook over low heat. Grated cheese can be served at the table and entrusted to everyone to pour into their bowl, as many as they want, although the prescription presupposes pouring soup over portioned broth cups with the addition of toasts and cheese. After this, it is recommended to still simmer the onion soup for several minutes in the oven until the cheese melts. You can refer to onion variation and a recipe for soup with melted cheese, when together with onions, the carrots are fried, giving the first dish a beautiful orange shade. In this case potatoes are added to the pot. Lastly, 200 grams of cheese is rubbed on a large grater of grams, and the contents are brought to readiness, that is, until the cheese melts. Considering the fact that the next baking of ready soup in the oven is expected, many housewives began to cook onion soup in clay pots, which is so characteristic of Russian cuisine. And every cook makes something of their own in the recipe: some toast with garlic will rub, someone will cream the broth into the broth or the onions will not be fried in creamy, but in olive oil. In this case, creativity is only welcomed. It is not surprising that today you can meet the recipe "onion soup with rice noodles" or with the addition of whole grains and oat-flakes.

Thanks to the low caloric content of the onion itself,that onion soup can be cooked without the participation of meat broth, this recipe has safely taken root in the menu of all those who wish to lose weight. Only passerovka in oil is excluded. For cooking you need a set of vegetables such as cabbage, 5-6 bulbs, bell pepper, a bunch of celery, 1-2 tomatoes. All vegetables are crushed, poured cold water and sent to the stove. Cook until soft content. Nutritionists say that this onion soup has an exceptional health benefit, and it can be eaten several times a day, forgetting about counting calories. It remains only to try one of the options in your kitchen or to invent a new unprecedented recipe.

The recipe for classical saline