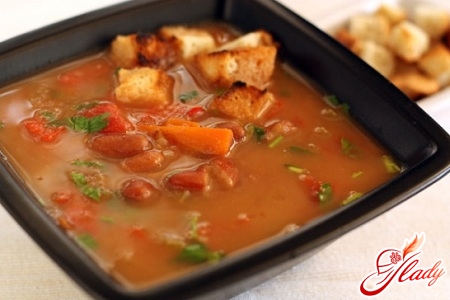 Beans are boiled, preserved, frozen. Cook soups and side dishes from it, make cutlets and sauces, add to salads. All dishes from beans can not be counted. So let's stop on a "two in one" dish. Namely, we learn how to cook soup puree from beans.

This vegetable soup has a delicate creamy consistency and a wonderful taste, tinted with celery. Ingredients:

Preparation: Glass beans washed and soaked for an hour in cold water, boil. We rub on a large grater two medium carrots (washed and peeled). We cut into pieces two stalks of celery. Potatoes (four pieces) are cleaned, cut and boiled. Carrots and celery lightly fry, add to them a potato broth and stew for fifteen minutes. We put into the pot the cooked beans, potatoes, carrots and celery. Shake with a mixer or blender and dilute everything with a decoction of beans. If the soup is too thick, then dilute with boiled water. We put it on the fire and let it boil. We cut finely onions and fry it in vegetable oil. Ready soup is seasoned with fried onions and fresh herbs. Serve with sour cream.

Many beans are combined with beans. For example, beans are often added to bean soup. And also soups of white beans cooked with cream or milk. Try to make creamy white bean puree soup according to this recipe. Ingredients:

Preparation: Put the beans in a saucepan of cold water and let it boil. Remove from the fire, drain the water. Fill the beans with cold broth and put it back on the fire. While the bean is boiling, wash our carrots, celery and onions. We put whole vegetables in the boiled beans, salt and cook until the beans are ready. Then we take out the vegetables, and the remaining mass (beans and broth) is wiped through a sieve. We beat the puree with a whisk, dilute the cream and heat it. We heat the soup with butter and a whipped mixture of milk and egg yolks. We serve with toasted toast. 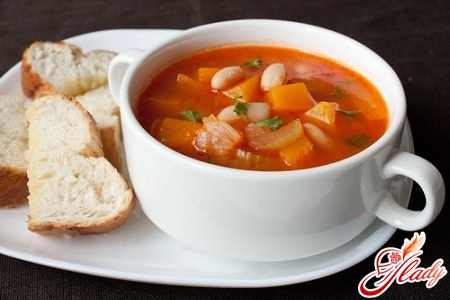 This creamy soup is prepared from canned beans. Believe me, his taste will be no worse than that of the soup from the previous recipe. Ingredients:

Preparation: Washed and chopped celery (one spine), carrots (one piece) and leeks (two stems) are cooked until ready. To the cooked vegetables we add two cans of canned beans and again we boil everything. Wipe the soup through a sieve or whisk in a blender. Pour the soup-mashed potatoes into a saucepan, fill with whipped egg yolks (a glass) and two tablespoons of butter. Served with croutons of white bread.

Do not want to try to cook the bean soup in the African interpretation? It is also prepared from white beans, but not canned, but dry. Ingredients:

Preparation: Wash the washed beans in a saucepan with cold water and cook until soft. Steamed beans are taken from the pan and grinded in puree. The resulting mashed potatoes are put back into the pan. Finely chopped onions fry on melted butter. Fry the flour in a dry frying pan and brew with hot water. In the soup, add flour and onions, salt and bring it to a boil. Serve hot, seasoning with pepper and herbs.

The soup of green beans, cooked on a meat broth and dressed with an egg-shaped lemon has a very delicate taste. Ingredients:

Preparation: We divide the whole beans into two parts: for soup and garnish. The first part is cut with rhombic or brusochkami and boil in slightly salted water. From the rest of the string beans, we prepare mashed potatoes, twisting it in a meat grinder. Prepare the white sauce from the broth and flour, put the chopped beans into it and cook for 20 minutes. We rub the soup through a sieve, boil it, fill it with yolk, whipped with milk, butter and mix. In the ready soup, add the boiled pods of green beans and serve it with croutons. 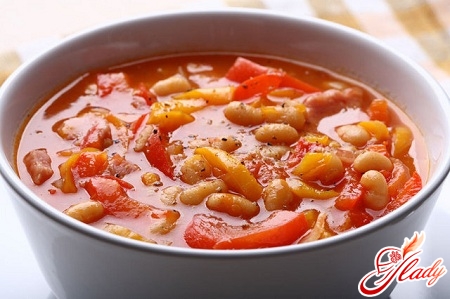 Cooking: My vegetables. Scald the tomatoes with boiling water, peel them from the skin. We pass the carrot through a large grater, chop the garlic. Tomatoes, pepper (peeled from seeds) and onions cut into cubes. Vegetables, alternately adding to the brazier, fry in this order: onions, garlic, carrots, peppers, tomatoes. In the resulting vegetable stew we add beans from the first jar, a little water is cooked for about half an hour. Finished soup grinded in puree, we add beans from the second jar, and, having seasoned, put on the fire. We boil and let it brew for 10-15 minutes. Serve with greens.

Beans product has medicinal properties: removes excess liquid and slag; has a beneficial effect on the skin, softens the chest and lungs. It is recommended for use in diseases of the bladder, gastrointestinal tract, kidneys and heart failure. But even if you are perfectly healthy, bean dishes will add to your peace of mind and good-humored mood, as beans also act on the nervous system in the most positive way. We advise you to read:

Cream-soup made from cauliflower: recipe

Cream of pumpkin soup suitable for use at any age