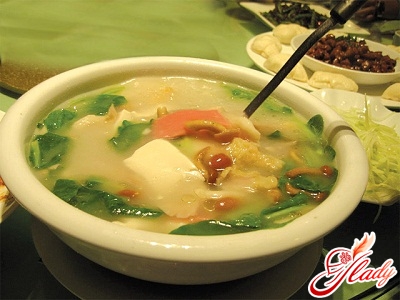 Cooking method: For this soup of seafood, you can use both shrimp and mussels, and a frozen mixture of Sea Cocktail. Potatoes, peppers, tomatoes, peel and cut into cubes. Onions and garlic finely chopped and salvaged in a pan with dry red pepper on moderate heat. Then add chopped vegetables and simmer on low heat until the pepper is ready. After that, stew vegetables to grind in a blender, put back into a frying pan, pour broth. Peeled shrimp and fish fillets cut, shrimps with a shell rinse. Put everything in a broth with vegetables. To simmer the seafood soup over low heat for a few minutes so that the fish is not digested. Separately in a pot, cook potatoes until half cooked. Add to it the contents of the frying pan, saffron, bay leaf, salt. Leave to stand for 10 minutes under the lid. Spanish seafood soup is ready. For decoration you can sprinkle with chopped fresh herbs. Bon Appetit!

Italian soup with seafood and cream

Cooking method: To make soup with seafood and cream, you need to use fresh cream 15% or 20% fat. Peel the potatoes and cut them into cubes, cut the white part of the leeks into rings, put them in a deep frying pan and fry for 8-10 minutes without water and oil until golden brown. Then add water, simmer for 15 minutes on moderate heat until boiling. Pepper and salt. Cook for another 3-5 minutes, then crush the mass in the blender to the state of mashed potatoes. Puree put in a saucepan, add wine and cream. Boil. Separately in a frying pan fry seafood, then put them in a saucepan in the soup, stir. Italian soup with seafood pour on plates, decorate with dill and shrimp. Bon Appetit!

The seafood soup, the recipe of which is written below, refers to the national French cuisine. Also this recipe can be found under the name creamy soup with seafood. Ingredients:

Cooking method: To make soup-puree from seafood, shrimps must be cleaned of shells, washed and finely chopped. Put butter, prawns and champignons in a saucepan, fry for 5 minutes. Pour the wine and broth. In the seafood soup, add celery, pepper and nutmeg. Cook the soup over low heat for 15-20 minutes. After that, the seafood soup should be drained, the celery should be taken out and chopped into a blender. Add the cream in the cream soup, salt. Before serving to the table in each bowl soup-puree from seafood put 1 tbsp. Spoon the whipped cream and decorate with greens. Bon Appetit! 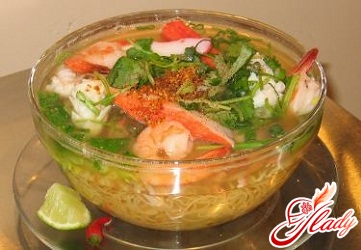 Cooking method: The preparation of seafood soup in Thai will take 35 minutes. Chop the lemon sorghum along in half. Ginger clean and cut into slices. A spicy soup is made with Thai seasonings and chili paste. Wash seafood. Put broth, lemon sorghum, lime zest, chopped ginger and chili paste in a saucepan. Bring to a boil, then reduce heat, cover and cook for about 15 minutes. The feathers of the green onions are thinly sliced, the shrimps cut in half along, without separating the tail. Add the onions in a saucepan and cook for 2-3 minutes. Salt. Then put the scallops and shrimp, cook for about 1 minute, until the scallops change color, and the shrimps do not fold. Before serving Thai soup with seafood, sprinkle with fresh coriander and decorate with red bell pepper. Bon Appetit! 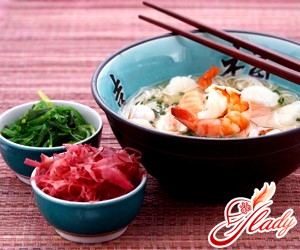 Japanese culture is known for ancient traditions, andthe cuisine is distinguished by the wide use of seafood in dishes. Japanese seafood soup has several cooking options, but the most famous is miso soup, in which, along with seafood, the main ingredient is miso paste. Miso is a bean paste made from boiled and mashed soybeans with the addition of salt and malt. The mixture is also fermented from a week to a year. Miso is not a dish, it's just a seasoning that reveals the true taste of foods. Miso soup with seafood, the recipe of which is described below, can be easily prepared at home. Ingredients:

Cooking method: To prepare miso soup with seafood, this recipe requires broth dasi (dashi). The broth of dasi is made from dried anchovies (niboshi) and dried kelp seaweed (kombu). Briquette tofu cut into cubes of 1-2 cm. Cut the leaves of sea kale with thin plates. Broth the boil, put into it tofu, sea kale and a mixture of seafood. Cook for 5 minutes on low heat, then turn off the fire. Miso paste diluted in a ladle of hot broth until the lumps dissolve. Pour into a saucepan, heat the miso soup over low heat, not boiling. Serve miso soup with seafood hot. Bon Appetit!

Traditional Chinese soup is prepared with fish or seafood and, unlike the hot Thai soup with seafood, is distinguished by its original sour taste. Ingredients:

Cooking method: Garlic let through garlic or finely chopped. Pour water into the pot, add the garlic and sea salt, bring to a boil. Then put rice and cook for 5-7 minutes. Add seafood, cook for 2-3 minutes. Instead of frozen seafood to make soup you can use fish or only shrimp, squid, octopus or other to taste. Squeeze juice from lime, chili peppers cut into strips. In a saucepan with seafood soup, add lime and chili juice, soy sauce, put the scented pepper, mix thoroughly. Cut the tomato into pieces, put into a saucepan and boil for another 3-5 minutes. Ready Chinese seafood soup decorate with fresh greens of coriander or parsley. Serve hot. Bon Appetit! 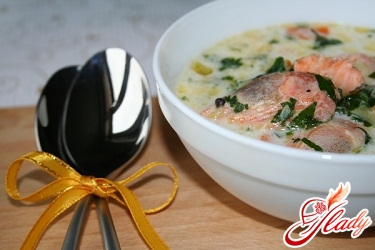 How to make seafood soup with cheese and red fish? Then the recipe for cheese soup with seafood for you! Ingredients:

Cooking method: Peel potatoes and cut into cubes. Boil water, put the potatoes. Vegetables peeled, chop the onions finely, grate the carrots on a large grater or cut into strips, fry everything in olive oil over medium heat until golden. Cheeses grate on a grater, and put in a pot, when the potatoes are cooked, mix everything thoroughly until the cheese dissolves completely. Put the fried vegetables, salt. For fish soup with seafood any kind of red fish will suit to taste. Salmon fillets cut into cubes, shrimps cleaned, add everything to the soup and cook for 5 minutes. Then reduce the fire to a minimum, put in fish soup with seafood and cheese parsley, leave to stand for about 5 minutes. Cheese soup with seafood and red fish is ready! Bon Appetit!

Cream soup from seafood is easy to prepare andjust. It has a delicate taste and will appeal to both adults and children. The recipe is given a special refined taste by three soup bases: broth, milk and cream. Cream soup from seafood, the recipe of which is written below, is prepared from fresh mussels and bacon. Ingredients:

Cooking method: For making soup from seafood, fresh mussels are needed. First of all, we must throw mussels with a broken shell or open and unclosed. The remaining mussels soak for 1-2 hours in cold water, then discarded in a colander and put in a pan, pour 1 tbsp. water, cover. As water boils, reduce the heat and keep for about 5 minutes. Then drain the liquid into a separate container and discard the mussels that have not opened. From the remaining shells take out the mussels. You can also use other seafood: shrimp, squid or octopus. Bacon and onion finely chop, garlic to squeeze through garlic. Separately in the pan, heat the vegetable oil, put bacon, onions and garlic. Stir, cook over moderate heat until golden bacon and soften onions. Add the diced potatoes, stir. To the liquid in which mussels were brewed, add water so that 1/4 cup turns out, pour into a saucepan, also add milk and broth. On medium heat bring to a boil, then cream soup to keep 15-20 minutes on low heat until the potatoes are ready. Then remove the lid and cook for another 10 minutes. Then add the cream, mussels, pepper and salt. Cream soup from seafood before serving, heat, but do not boil. Garnish with parsley. Bon Appetit! Tomato Soup with Seafood Recipewithout broth and milk or cream. As a rule, to make tomato soup with seafood on this recipe, tomatoes are used in their own juice. But it is also possible to prepare from fresh tomatoes or tomato paste. Tomato soup made from seafood is thick. Ingredients:

Cooking method: For tomato soup with seafood and tomatoes, it is better to choose tomatoes, preserved in their own juice and without vinegar. If you use fresh tomatoes, then they will need more, the more watery they will be. Garlic chop, cut the onions into half rings, and fry everything in olive oil in a saucepan. With tomatoes remove peel, grind them and put in a pan. There also pour the tomato juice from the can, where the tomatoes were. Bring to a boil, then put the shrimp and fish cut into slices. Pepper, salt, sprinkle with sugar and seasonings to taste. Thick soup from seafood and tomatoes is ready! Tomato soup with seafood served hot, decorate with fresh herbs of parsley. Bon Appetit!

Under the recipe described below, you can prepare a seafood soup known as milk soup with seafood or creamy soup. Ingredients:

Cooking method: Soup from frozen seafood has an exquisite taste, if you cook it on milk with the addition of sour cream and cream. A mixture of seafood unfrozen. Peel onion, finely chop and lightly fry in butter. Add flour, save, stirring constantly, for 3-4 minutes. Then add sour cream and cream, stir and cook for about 5 minutes until thick. Pour the milk into a saucepan, bring it to a boil and leave it over low heat. Put the seafood in it, cook for 2-3 minutes. After that, gently enter into the milk soup prepared mixture, boil until thick. Pepper and salt the seafood soup to taste. Before serving, a plate of creamy soup with seafood should be decorated with fresh herbs. Bon Appetit! We advise you to read: