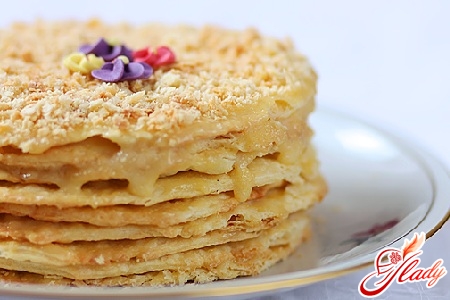 Cake napoleon favorite delicacy of millionssweet tooth. Have you ever thought about why this dessert has such a strange name. True, well, what does Napoleon, Bonaparte, have in general, does he have anything to do with this flaky delicacy? In search of an answer, I had to thoroughly dig on the Internet. The information, I must say, is the most contradictory. I'll have to share everything I've learned. Versions presented on the Web are suitable for every taste: romantic, mundane, sentimental and even those that have a certain philosophical overtones. Here's one of them. As you know, the emperor was a fan of female beauty and never refused attention to the beautiful sex. Once Josephine witnessed his whispering with one of her maids of honor. In his defense, the emperor came up with a rather strange story about the sudden surprise of his recipe for an amazing dessert, which he allegedly told the court lady. It was necessary to chew the cook, who the next day served a cake of tender dough and a delicious cream to the table. A less romantic version boils down to the fact that by the centenary of the Battle of Borodino Moscow confectioners have prepared a new dessert. Pastry from puff pastry and custard in shape resembled a cocked hat - this was the headpiece Napoleon Bonaparte wore. Dessert has taken root, has become a favorite and now it is prepared in the form of a cake. Which version looks more plausible, it is difficult to say. Yes, and that's the point. The main thing is that we have a delicious treat, and today we will tell you how to properly prepare a cake Napoleon. By the way, desserts with a similar name can be found in cafes and confectioneries of many countries, in particular in Norway, Sweden, Germany. Before going directly to recipes, several important points. A classic cake is Napoleon, or rather a dough for it, is cooked in butter. However, many housewives note that cakes cooked on a margarine basis are more delicate and delicate. Ideally, a classic Napoleon cake should be prepared from a classic fresh puff pastry. However, this process is so laborious that now even a classic recipe is served in a lightweight version. But we are not looking for easy ways and let perfectionists bake a real cake Napoleon. 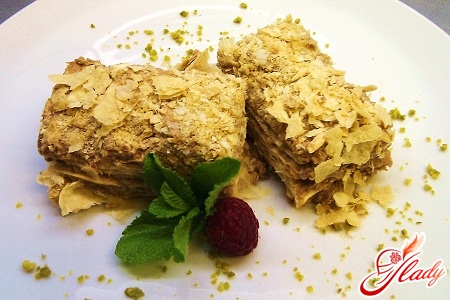 The recipe for the preparation of the dough: Sift flour into a bowl. Egg pour into a glass, add water to the brim and shake, pour into a bowl of flour, add lemon juice, salt and another half a cup of water. Knead the dough. Form the ball and leave it under the film for half an hour. Roll out into a layer, sprinkle with flour and leave under the film for 15-20 minutes. Pour soft oil in a bowl, add a couple of tablespoons of flour and mix with butter. Put the resulting mass in the freezer for half an hour. Cut the butter into thin slices and spread out the dough in such a way that it can be covered on both sides. It turns out a kind of rectangle, which must be patched from the open sides and folded four times. Prepared dough to send to the refrigerator for 20-30 minutes. Roll out the resulting billet into a rectangular formation (1 cm thick) and fold it four times. Send to the refrigerator for half an hour. Repeat two more times (roll out - fold - cool). The dough is ready. Ingredients for Cream:

The recipe for the preparation of cream: Eggs beat up with sugar, add flour, a little milk and beat again to get a mixture of a homogeneous consistency. Milk bring to a boil, pour in the resulting mixture and cook on low heat until thick, at the end add vanilla sugar. After the cream has cooled, add soft butter in small portions. Beat the cream in a lush mass. Cake preparation recipe: Divide the dough into 6-8 equal parts. Each roll out very thinly and bake cakes. Before you put the baking tray into the oven, cover the cake with a fork so that it does not bubble. One cake used for crumbs, which will go to the decoration. Temperature 180-190 degrees, bake until golden brown. Cooled cakes generously smear with custard, the top layer - cream, sprinkled with crumbs.

The recipe for the preparation of the dough: Sift flour into a bowl, add the cold margarine cut into small pieces and grate it with flour. In a very cold water, add the vinegar, mix. In small portions pour into a mixture of flour and margarine and knead the dough. Divide it into 8-10 parts, each roll into a ball. Place the dough in the refrigerator for 30-40 minutes. Ingredients for Cream:

The recipe for the preparation of cream: Yolks grind with sugar, add flour and a little milk, so that a mixture of a homogeneous consistency is obtained. The rest of the milk is poured into a saucepan and put on fire. Bring to a boil, reduce the heat to a minimum, pour in the resulting mixture and cook, stirring constantly until thick (the cream should not boil). Cool, add, gradually whipping, soft butter, vanilla sugar. If the cream does not seem sweet enough, you can add sugar powder at the last stage. The recipe for the cake: Each ball of dough is rolled very thinly, wound on a rolling pin and transferred to a baking tray. Poke with a fork and put in the oven, heated to 180 degrees. Bake until golden brown. It is important not to over-rest the cakes in the oven, they are thin and are baked fairly quickly. Usually, while one crust is rolled out, the other already has time to bake. Each cake is generously greased with cooked custard. One cake to grind into a crumb and sprinkle it with the last creamy cake. The cake is napoleon ready. And, at last, one more recipe of the test for Napoleon - the most simple. This is just a luxurious recipe puff pastry, from which you can cook not only a dessert adored all (cake Napoleon). It is perfectly combined with a wide variety of fillings. 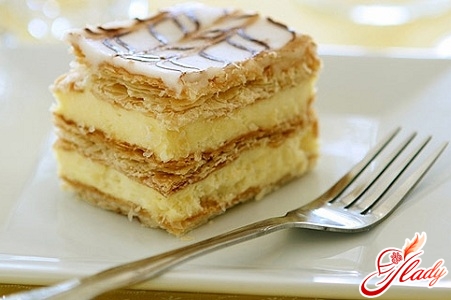 The recipe for the preparation of the dough: Sift flour into a bowl. Egg, salt and water beat, pour into a bowl of flour and knead an elastic, smooth dough. Roll in a thin layer, apply a softened margarine and roll into a roll. Send the resulting blank in the refrigerator for about an hour. Cut the roll into small pieces, roll each into a thin layer and bake cakes at a temperature of 180-190 degrees. They should become golden. To smear the cakes with custard (cream recipe see above) Notes:

As you could see, each recipe has its owna highlight. Try to cook the cake Napoleon, using our recipes and tips, and, of course, experiment. Cook with pleasure. Bon Appetit! We advise you to read: