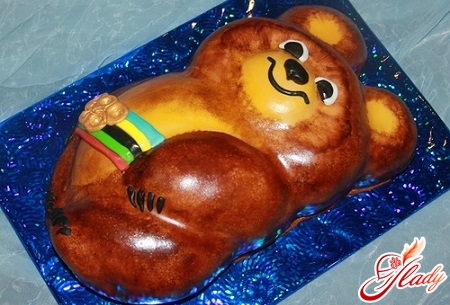 If you have never met this beforecake, then lost a lot. The thing is that people who see him for the first time are amazed at the skill of the confectioner who worked on him. Yes, with a special skill, he looks very realistic. This cake is perfect for any children's holiday. It is always more interesting for small sweet tooth to try not an ordinary dessert, but made, for example, in the form of an animal or a beloved fairy-tale hero, beautifully decorated, with inscriptions and drawings. Let's not hide that cooking the cake "Olympic Bear" requires from you not only culinary skills, but also excellent artistic abilities. You will need to draw a model of the future cake on paper or cardboard, and in the picture there should be a bear with Olympic symbols. And if you manifest a fantasy, you can figure out how and from what to make him eyes, nose, mouth. The main thing is to include the imagination and develop the idea. A cake will really require a lot of your patience, but if you do it, then, believe me, both children and adults will definitely appreciate it.

The peculiarity of this cake is that practicallyalways in its recipe includes honey. The dough turns out to be a pleasant dark golden color, with a delicate aroma. Fans of "honey" will surely appreciate this unique taste from childhood. Ingredients:

Cooking method: To begin with, do the test, its recipe is this: melt 250 grams of butter, add honey, two eggs, half a dose of sugar (400 grams) and two tablespoons of soda. Mix these components in one container and put them on a water bath. Gradually the mass begins to heat up, in time it will be twice as large. When this happens, remove it from the heat and cool it. Sift the flour and knead the dough. On the cardboard make a drawing of the future bear, you should get 3 patterns - trunk, paws and head. Prepared dough roll out a rolling pin in a thin layer. And then cut out 6 pieces of each part of the body in patterns. Lay out all this on a baking tray (you can bake in several approaches, the cakes fit quickly), laid with parchment, and put in the oven (180 degrees). Finished biscuits will have a beautiful golden color, but just in case check them with a match or wooden stick. So bake all the pieces of the cake "Olympic Teddy", let the cakes cool. To collect these biscuits together, you need to make a cream, its recipe is simple: beat the sugar (200 grams) with sour cream to a luxurious state, then add a soft butter (150 grams), whisk together again. And more chocolate glaze is needed, it should be done like this: mix 250 grams of sugar with cocoa powder, milk and 150 grams of butter, cook for about 5 minutes. The glaze should thicken and be homogeneous. Now the most important thing is to assemble the cake. First make a trunk: for this on a large tray lay out the appropriate cakes one on the other, promazyvaya their cream. Further engage in the head: attach it to the body and in the same way increase the layerwise interspersed with the cream. Just lay out the paws of your bear. Further, the whole bear is covered neatly with cooked chocolate icing. From white coconut shaving you can make a tummy and a muzzle. Out of colored marmalade, lay out your eyes, mouth and nose. Do not forget about the belt from the Olympic rings! You can decorate this cake any way you like, your imagination will come to your aid! 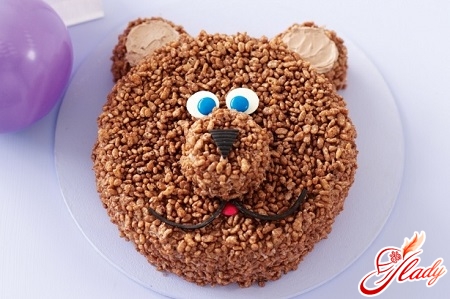 Using the specified recipe, you can easily bakethis cake to any holiday. On a children's celebration, birthday or birthday - he can always decorate your sweet table. It turns out very fun, spectacular and, most importantly, delicious, not only for children, but also for adults. Ingredients: For the dough:

Cooking method: Traditionally, start making this cake from the test. To do this, in a large bowl, combine the eggs, sugar, softened butter (or margarine), salt, soda and honey. Stir all the ingredients, turning them into a homogeneous mass. Build a bath (put the container with a batter in a pot of water). Turn the fire under the pots, only look, so that the bowl does not touch the boiling water. Hold the dough for 5-10 minutes. During this time, it will increase slightly in size. And when the foam starts to gather, it's time to introduce flour into it. Knead the dough, roll it in a thin layer. Next, your task is to cut out the necessary details from the pattern test. On parchment paper, make a pattern of the future bear. You will need: 7 trunks, 7 heads, 2 paws, 2 eyes, ears and nose. You can draw a pattern yourself or draw from a drawing taken on the Internet. Remember that the paws should be made in such a way that they lie on the body, otherwise, after being soaked with cream, they will sadly hang from the cake. When the artwork is finished, place the body parts of the bears on a baking tray covered with paper. Bake in the oven at 180 degrees for about 20 minutes (the cakes are rather thin and ready quickly, so watch them). Finished parts of the pie, get out of the oven and put cool. In the meantime, prepare the cream. Since it will be sour, recall its recipe: mix sugar and sour cream. With a mixer, whip the ingredients into a luxurious cream. When the sugar dissolves, add the norm of soft butter and re-work with a mixer. The next step is chocolate icing for decorating the cake. In order to cook it, mix sugar with cocoa powder, add sour cream and heat, bring the mixture to a boil and turn off the fire. Do not forget to constantly interfere with the glaze, because it quickly burns. At the end, put a piece of butter, stir to dissolve completely. Set the glaze to cool, and in the meantime, collect the cake. Prepare a large flat dish. On it lay out in one layer of the body part bears: first the trunk, attach the head to it. Lubricate with cream. In the same way, lay out other layers, soaking them with cream. Make paws. Cover the chocolate cake not only on top, but also on the sides. Make a teddy bear's eyes and nose, form the ears. Complete the character's image with wedges of marmalade, pieces of dried apricots, prunes or nuts. Bon Appetit everyone! 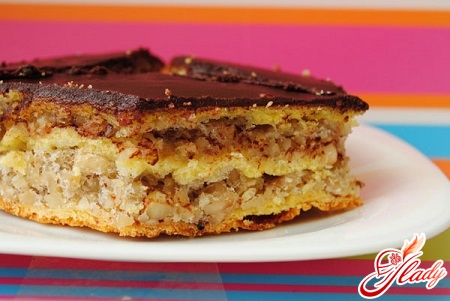 By the method of preparation and technology, allSimilar cakes are the same, they have only minor differences in the list of components. But! As in any other confectionery, you always have room for imagination. Especially, if it's a cake "Olympic Bear". The body of this hero on top of the cake and cream can be laid thinly sliced ​​fruit, and the details to decorate with pieces of chocolate, dried fruits or small cookies. And your recipe will be new and unique! Ingredients: For the dough:

Cooking method: In one deep bowl, connect all the ingredients from the "for test" section, except flour. Stir them with a spoon into a homogeneous mass. And then put on a steam bath and bring to a boil. The dough should become lush and increase in volume. When this happens, it can be removed from the plate and cooled. And then put in the dough sifted flour. Mix the soft mass, send it for 1 hour in the refrigerator. Now you have time, use it for art. Imagine what kind of bear you would like to see on your sweet table. And transfer with your pencil your fantasy about such a hero as an Olympic bear, on paper. You should get a funny animal with a trunk, head, ears and paws. Dough thinly roll on the table, and then cut out from it patterns of 6-7 body parts and the head of the future bear, as well as paws - 2 pieces each. Bake these pieces on a wide baking tray covered with paper. It will take approximately 20 minutes (the oven should warm up at around 180 degrees). The recipe for honey cream is simple and consists of only two components: sour cream and honey. In the indicated proportions, mix the ingredients and whip them into a lush air mass. Cook the chocolate icing. You can find far more than one single recipe for its preparation on our website. But now we offer you this way: first mix the dry ingredients - sugar and cocoa, - add milk to them and put them on the gas. After boiling the mixture over low heat, add oil to it and stir again. Remember that you can cover the cake only with cold glaze. Begin to collect your teddy bear: Lay the hero out of the cake on the platter in the first layer. If there are any unevenness, with the help of a knife, you can fix everything. Lubricate the whole cream dessert. Collect so a bear, until the cakes run out, do not regret the sweet refueling. At the end, cover the teddy bear with chocolate glaze. Slice delicately oranges, tangerines, bananas. Each part of the body is laid out with different fruits. Make eye sockets from nuts and pieces of chocolate. From seeds, you can build a bear claws. Sure, in our article you found that recipe that aroused interest. And finally, remember several rules for its preparation: first, pay attention to kneading the dough. It is desirable not to deviate from the indicated proportions of ingredients and it is obligatory to use a steam bath for its preparation. Well, and secondly, another important point - this cake needs at least 12 hours to be in the refrigerator. During this time he will have time to soak and become soft. It will be better if you cook it in the evening, and it will stay in the cold all night.

Homemade sour cream cake is a dessert for everyone to envy!

Wafers in a waffle-maker: a recipe for dessert for every day

How to make jelly: a dessert that will not spoil your figure