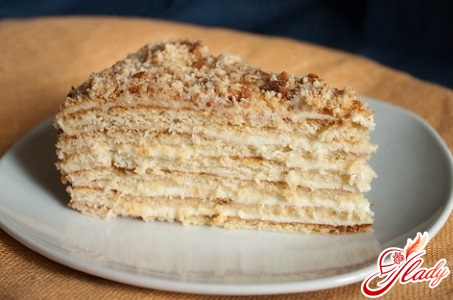 Recipes of honey cakes so much that you can justto lose count. Someone refers this cake to the category of puff. Someone argues that the recipe for honey cake is a recipe for sandy honey. And someone suggests to consider honey cakes as a separate kind of baking. All right. Any of these statements has a practical justification. After all, the recipe for a test for a medic is also far from alone. They are baked from a gingerbread dough, from sand, from a custard. And even the principle of baking biscuit used in the manufacture of honey cakes is different. But we'll try to make a honey cake for which we use sour cream. But the dough for each recipe will be different. And just how much this or that recipe will appeal to you, decide for yourself. 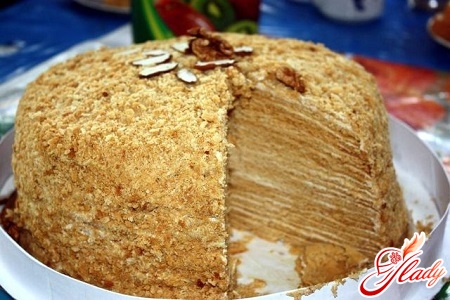 Preparation: This is a recipe for a custard honey dough. We take a saucepan of the appropriate size, we put butter (it can be replaced with cream margarine), honey and granulated sugar. We put the pan on the fire and begin to warm the mixture to a boil, constantly stirring it. At the very beginning of boiling, add baking soda and quickly mix the mass, which immediately starts to bubble and hiss, - this effect gives honey-quenched soda. Counting to ten, boil the mass until it turns into a foam, and then remove the pan from the fire. Let's cool this mixture, and then, one by one, introduce raw eggs, each time mixing everything well. Following the eggs, add the flour into the dough and once again knead all until a homogeneous viscous state. Preheat the oven to 180 degrees. We cover the baking tray with baking paper. Now smear on the baking half of the dough, forming an even thin layer. Bake the cake for ten to fifteen minutes, and then remove it from the baking tray and cut it in half - you get two crusts. Similarly, bake the cake from the remaining dough, which is also divided into two parts. We leave the cakes cool, and in the meantime we make a cream for our honey cake. For this we use only very fatty sour cream. So, sour cream is spread in a saucepan, add the sugar and whisk first at a low speed mixer, and then continue to whisk at high speed. It should be beaten long enough for the sugar to completely dissolve in the sour cream, and the cream itself became lush. Now we stack the cooled down cakes with a pile and cut them, aligning them at the edges. Cut the scraps into a crumb, which is then used for sprinkling. Now we collect cakes, generously lubricating them with sour cream. The edges and top are also coated with whipped sour cream, and then we pan it with the crumb obtained from the scraps of the cake. Ready cake we let it brew in warmth, so that the cakes are properly soaked with cream. Serve our honey cake chilled. 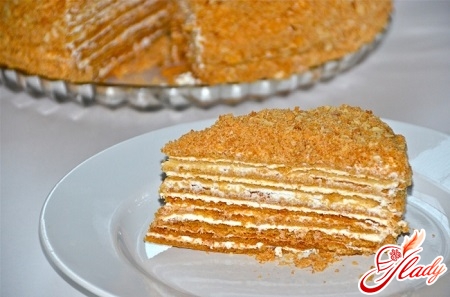 This recipe is noteworthy in that the dough does not need to be rolled into the seams. As you know, this makes the process of cooking much easier. Ingredients:

Preparation: Butter, eggs and sour cream for the dough is taken from the refrigerator in advance to warm them to room temperature. After this, the sifted flour is mixed with soda, pour into a bowl and add butter, and then grind everything into a crumb. In a separate bowl, beat eggs with sugar until the sugar is completely dissolved. Then add the honey and again lightly beat this mixture. Then we put the same sour cream there and again beat the mass until smooth. Then we connect this mixture with flour crumb, mix it well and put it in the refrigerator for an hour. In the meantime, turn on the oven and let it warm up to 200 degrees. When the dough cools, start baking cakes for honey cake. In a lubricated form, pour a few spoons of dough to get a smooth thin layer of pancake. Bake the cake for five to seven minutes until it turns golden. Similarly, bake cakes from the remaining dough - they should be ten or twelve pieces. Ready cakes leave to cool, and at this time, beaten sugar with sour cream, making a normal sour cream. Cooled cakes stack a pile, abundantly promazyvaya them sour cream. We decorate our honey cake with protein cream. To do this, chilled egg whippings are beaten with citric acid in a strong foam, and then add sugar in small portions, without stopping to whip the cream. Here so in different ways you can make a honey cake with sour cream. So choose a recipe and cook with pleasure. Enjoy your appetite and success in the culinary field!