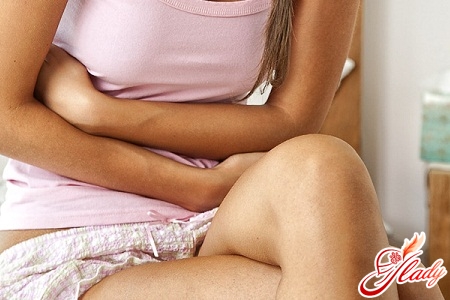 Menstrual pains plague a huge numbergirls and women. Of course, those lucky ones who did not have to deal with this problem can not appreciate the whole scale of the trouble. However, those women who know first hand what the monthly pains are, say that these few days in a month literally knock them out of the rut. Often, the pain experienced by a woman is so intense that it is necessary to call an ambulance brigade. There are many versions of the origin of menstrual pain. Some doctors - gynecologists say that often the main culprit of the fact that a woman has menstrual pain, is a hereditary factor. They argue that some women have an increased susceptibility to uterine contractions that necessarily occur during menstruation. And this feature is very often transmitted from mother to daughter. And in the event that such pains did not appear immediately, but after a few years, it may be worth talking about such a phenomenon as secondary menstrual pains. As a rule, they appear as a result of such diseases as endometritis, endometriosis, varicose veins of the pelvis, uterine fibroids and various infections of the genitals. And the more serious and neglected the disease, the stronger and more intense the pain. Often, women note that after the birth of a child, menstrual pains become much weaker, and at times disappear altogether. Doctors explain this feature by the fact that during birth the cervix of the uterus stretches. And it is due to this during menstruation that the uterus contractions are practically not felt. However, all cases of menstrual pain largely depend on the level of blood levels of hormones such as prostaglandins. These hormones are produced by the mucous membrane of the uterus and play a huge role in the functioning of not only the reproductive system, but also the entire female body. It is the excess of this hormone that leads to those negative phenomena that often accompany menstrual pains:

Of course, all women who suffer frommonthly painful menstruation, try to get rid of painful sensations in all possible and impossible ways. And often they buy expensive medicines at the pharmacy to relieve the pain, but they do not bring the expected result. In fact, the only pharmacological drugs that really help to remove pain during menstruation are acetylsalicylic acid and ibuprofen. These drugs not only have analgesic properties, but also significantly reduce the level of prostaglandins. However, they can be used only if the woman is sure that she does not have an allergic reaction to any of the painkillers. In addition, a good effect is a drug such as no-shpa - it perfectly removes spasms of the muscles of the uterus, which means, it reduces pain. There are also several other improvised drugs that perfectly help to eliminate pain during menstruation. Try, experiment, carefully listen to your feelings, and you will certainly choose the most suitable for you means. However, despite the fact that all these methods do not carry any threat, a woman still needs to consult a doctor in advance - a gynecologist. So:

As already mentioned above, pain inThe time of menstruation is most often provoked by strong muscular contractions of the uterus. Doctors say that heat very effectively removes muscle spasms - sometimes stronger than the most effective pharmacological antispasmodic. A woman can use either a special heating pad or an ordinary plastic bottle filled with water of suitable temperature. Place heat on the lower abdomen for about 15 minutes, then move it to the area of ​​the lumbosacral region. Heat can be left for as long as necessary, so that the pain recedes. However, pay attention - if you use warming up, do not take acetylsalicylic acid. And keep in mind that during warming up bleeding may slightly increase - this is absolutely normal, and this should not be frightened. Once you stop heating, the intensity of bleeding will return to normal again.

As practice shows, the leastMenstrual pain affects those women who are in good physical shape. Of course, do not play sports in those days, which are marked by menstrual pains. However, on all other days, it is worth paying attention and devoting time to physical loads. Physical exercise improves blood circulation in all organs of the small pelvis, including the organs of the reproductive system. As a rule, women notice significant improvements after only one month after the beginning of regular physical activity. And this does not necessarily have to be exhausting physical activity in the gym - sometimes even ordinary daily walking walks before going to bed. 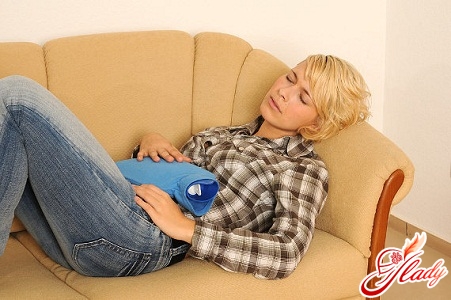 A hot bath has about the same effect,as well as a hot-water bottle, however much faster, and capable to remove much more intensive painful sensations. The basis of anesthesia is the same removal of stress and muscle cramps of the uterus. Doctors also recommend adding a little sea salt to the bath - this will help a woman to be toned in these difficult days for her.

Infusion of chamomile and celandine

Prepare the next infusion. Take two tablespoons of dry chamomile inflorescences and half a teaspoon of celandine grass. Put them in a thermos or enamel dishes, pour half a liter of steep boiling water and insist for an hour. After that, strain with gauze cloth, add honey for taste or sugar if you have an allergic reaction to honey. This broth a woman should drink during the day, in small portions. As a rule, relief comes in five to six hours. A very good effect this infusion has in combination with thermal procedures, whether it's a hot bath or a heating pad.

All of the above described meansare effective, but most of them are convenient to use only if the woman has the opportunity to spend critical days at home. If the pain in the menstrual cycle is strong, and work is still necessary, the pine needles will come to the aid of the woman. To prepare a medicinal broth, a woman must pass through a meat grinder two tablespoons of pine needles. After that, boil a liter of water, add there one tablespoon of dry chamomile inflorescences and pine needles. After literally one minute, no more, turn off the water and tightly wrap the container with a towel. Infuse the broth for about four hours, then strain through gauze. Take this remedy from the first day of the menstrual cycle, three tablespoons every two hours. Relief comes very quickly, in an hour and a half. What is most good in this remedy is that after the second - third month of taking decoction of needles, menstrual pain very often disappears irrevocably.

A good remedy for the prevention of painfulmenstruation is a decoction of the oak bark. Acquire the bark of oak in the pharmacy, chop it and pour five tablespoons into one liter of boiled water. Boil the broth for about 15 minutes, then insist at least a day. This broth, a woman should douche every evening before going to bed, except for the days of menstruation.

In the event that a woman often experiencespain during menstruation, it makes sense for her to talk with her doctor about hormonal contraception. As already mentioned above, a violation of the hormonal background often provokes the occurrence of menstrual pain. That is why when menstrual pain gynecologists advise a woman to be protected with oral contraceptives. They contain certain hormones, which also reduce the intensity of pain. Of course, in any pharmacy there is a fairly wide choice of hormonal oral contraceptives. However, do not buy the one that you liked more because of the appearance of the package. In order to choose the drug that best suits you, the doctor will prescribe a blood test for the level of hormones. Strictly speaking, a visit to a gynecologist is mandatory in any case. Unfortunately, sometimes the cause of painful menstruation is much more serious diseases that can threaten the health of women. All women know that during a month's trip the gynecologist is usually not planned. It is more reasonable to go to him either 5 days before the start of menstruation, or on the fifth day after the end of menstruation. During this period, the examination of the doctor will be most effective. However, remember that if you have a very painful unusual menstruation, and if it is accompanied by more abundant bleeding than usual, this rule does not work - ask your doctor - gynecologist as soon as possible for help. In the same case, if it happened on a day off, you should not tolerate it until Monday - you need to call an ambulance brigade. We advise you to read:

A furuncle on the face - how to treat?

Neurotic depression is an invisible danger!

Oxygen concentrator on the guard of human health