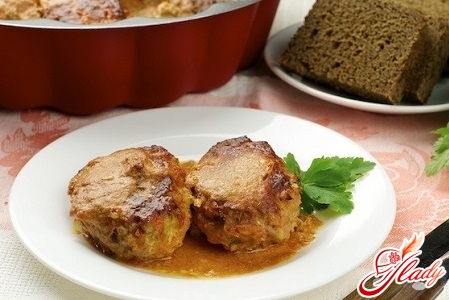 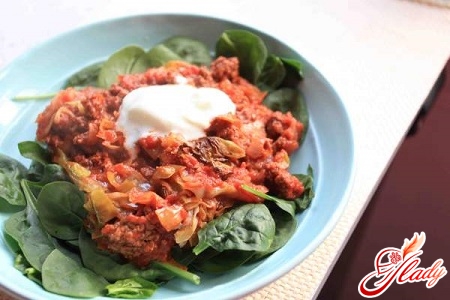 Cabbage rolls baked in the oven

Perhaps the easiest recipe for brass lazy cabbage rolls. We will begin with him. Ingredients:

Preparation: For cabbage rolls, almost any minced meat will do. The main thing that it was not too fat. So, toss the stuffing into a deep bowl. Cabbage is finely shredded and stewed for literally five to seven minutes. To do this, add it to the brazier, add one or two tablespoons of water and a little salt. We cook in an open brazier until all moisture evaporates, and the cabbage does not soften. We put the stewed cabbage in a colander and completely cool it. During this time it is necessary to prepare rice. We cook it until the incomplete readiness, that is, that the groats remain a bit stiff. Rice is also cooled, and then transferred to a bowl with minced meat. There we also add cabbage, one raw egg, salt and black ground pepper. Now we clean and very finely shinkuem bulb, which is also put in minced meat. After that, we mix everything thoroughly and form small cutlets. Turn on the oven and let it warm up to 250 degrees. We cover the baking tray with vegetable oil and lay out on it our lazy cabbage rolls. We send the baking sheet with stuffed cabbage to the oven and bake for about fifteen minutes. After that, take out the baking sheet, generously grebish the cabbage rolls with sour cream and put it back in the oven, reducing the temperature in it to 180-200 degrees. Twenty minutes later, the lazy cabbage rolls will be ready! Here's a simple recipe for cooking stuffed cabbage in the oven, which can be safely included in your home menu. 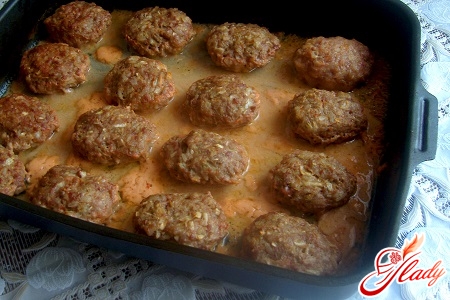 The recipe is a bit more complicated than the previous one. However, the prepared dish looks somewhat more solemn. So you can use this recipe not only for a casual lunch or dinner, but also cook cabbage rolls in the oven for a holiday. Ingredients:

Preparation: Rice boil until incomplete preparedness, washed, thrown to a colander and cooled. Cabbage finely shred. We stuff the minced meat into a bowl, add the cooked rice, raw egg, salt, basil and ground pepper. Thoroughly mix the stuffing. We put a pot of water on the fire and wait for the water to boil. From the stuffing we form balls (like meatballs) of medium size and brew them in boiling water. To do this, we lower the balls into the water and, as soon as the forcemeat grasps from above and loses the pink color, we remove the balls from the pan. Turn on the oven and take a deep baking tray or a wide baking dish. The bottom of the tray is covered with a layer of cabbage (two-thirds of the total) and put the meatballs on top. On top, cover them with another layer of cabbage. Onions and carrots are cleaned and chopped: onions shred, and carrots rub on a large grater. Pepper is also mine and is released from the membranes and seeds, and then cut it with small blocks. Fry vegetables in vegetable oil, and when they lightly brown, add the tomato paste, a little water and tush everything together for about three to four minutes. We spread the vegetable mixture evenly over cabbage and fill the cabbage with water, in which we boiled meatballs. Cover the baking sheet with foil and bake the cabbage rolls in the oven for about an hour. Finished lazy cabbage rolls on a dish, sprinkled with chopped herbs and finely chopped garlic. 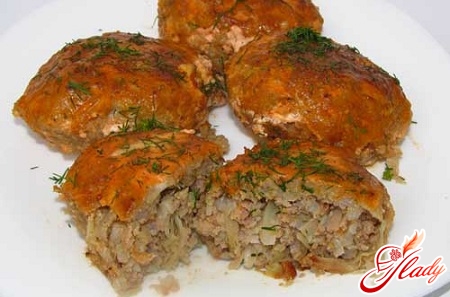 The recipe is also somewhat different from the previous ones and the set of ingredients, and the way of preparation. But this recipe is very similar to the one on which you can prepare meatballs in sauce. Ingredients:

Preparation: Rice boil in slightly salted water until incomplete preparedness. We wash it and throw it back in a colander to cool it down. In the meantime, cut the cabbage into very small cubes, fill it with steep boiling water and leave for about three minutes. During this time the cabbage will become soft and give back bitterness. In the meantime, we shred very finely the cleared onion and mix it with minced meat. There we add cooled rice, one raw egg, salt and black pepper. With the cabbage we drain the water, let it cool down, and also put it in a bowl with minced meat. We mix everything thoroughly and form minced meatballs, which are crumbled in breadcrumbs. In the brazier, we warm up the vegetable oil and fry the cutlets to a crust on high heat. The main thing is that they "grab". Lay the cutlets on a deep baking sheet and pour them with sauce (sour cream mixed with tomato paste). We put the pan in the oven, heated to 180-200 degrees, and bake cabbage leaves for forty to fifty minutes. 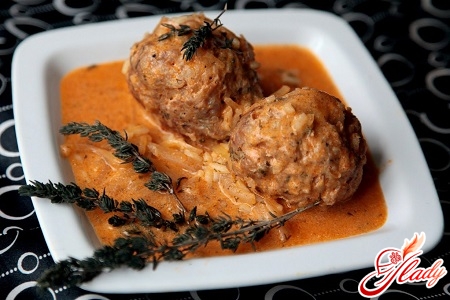 This recipe is quite simple. For these cabbage rolls, whole cabbage leaves are used, and preparing the dish does not take much time. Ingredients:

Preparation: The recipe is actually quite simple, although whole cabbage leaves are used for the dish. So, we remove from the fork cabbage leaves and cut off from them thickening on the veins at the base. If the leaves are torn, do not worry. We do not need to wrap anything in them anyway. Now we put a pot of water on the stove and wait for the water to boil. In the boiling water, we blanch the cabbage leaves so that they become soft and give off bitterness. Rice is washed and boiled until incomplete. Then rinse it again and cool it. We clean the onion, mine and very finely shred. Put the minced meat into a bowl, add the chopped onion and cooked rice into it. We put to taste black ground pepper, spices and salt and mix everything thoroughly. Now turn on the oven and leave it warmed to 200-220 degrees. Deep baking tray or a large baking dish with vegetable or butter and sprinkle a little salt. We put a layer of cabbage leaves on a baking tray. From above put a layer of forcemeat and so we repeat two or three more times. The last layer is also necessary to lay cabbage. Put the baking tray with cabbage rolls in the oven for about twenty minutes. After that, take it out and grease the cabbage rolls with sour cream, and sprinkle the top with crushed cheese. Again, we send the baking sheet with stuffed cabbage to the oven and leave it there for about fifteen minutes until the cheese melts and is roasted crusty. Finished lazy cabbage rolls served portionwise, cutting as a pie. You can season the dish with fresh herbs, butter or sour cream. So different is the recipe for lazy cabbage rolls baked in the oven. Their cooking takes much less time than carefully wrapping minced meat in cabbage envelopes. But to taste such cabbage rolls are in no way inferior to traditional ones. The fact that they can be cooked in the oven also allows you to save considerable time. Yes, and they turn out juicy and soft, but with a delicious appetizing crust. Please note that cabbage should first be slightly put out or held in boiling water, then the taste of cabbage cooked in the oven will be much more gentle. But just a very young cabbage can not blanch, and put in minced meat in raw form. Corrugated cabbage rolls will be provided by sour cream, which is baked on top of cabbage rolls. True, this is the case if sour cream is simply lubricated, and not poured. But the cheese is guaranteed to be baked to a crisp crust! By the way, very often lazy cabbage rolls are supplemented with mushrooms or eggplants. And in the lean version, they generally can replace meat minced meat. Therefore, you can safely upgrade any recipe you like. But the main success of the dish is the mood of the hostess. So choose a recipe and cook with pleasure. Enjoy your appetite and success in the culinary field!

Vareniki for a couple: the best recipes for cooking in a double boiler and not only

Lazy vareniki with cottage cheese: the best breakfast for children and adults

Stewed eggplants with meat: tsar's dishes on your table

Vareniki with cottage cheese: we feed the family only the best!