Vareniki with cottage cheese is a very satisfying dish thatwill become a full-fledged lunch, breakfast or dinner for the whole family. It can be made both on yogurt, and on curdled milk, on milk or water. In addition, the filling is selected the most diverse - men probably prefer vareniki with meat, sauerkraut or with potatoes, in the summer actual currants, raspberries or strawberries. You can prepare a dish from any products to which only the soul lies. Therefore, we offer practice in cooking. Choose the recipe you like and act!

Vareniki with milk and cheese

This is a fairly simple recipe, thanks to whichon your table will appear lush, juicy dumplings with cottage cheese. No ready-made store product can compare to your home, so do not be lazy to cook. Ingredients: For the dough:

Cooking method: At the very beginning of cooking you need to separate the yolks from the proteins. Then combine the latter with the above amount of water, milk and table salt, mix thoroughly. Then gradually, gradually adding to the resulting mass of sifted flour, knead the dough. Cover it with a lid or a clean towel and leave for about half an hour. As a result, the base for the dumplings will become elastic. This is a very good recipe, as the dough is quickly prepared and always works. You'll see for yourself when you get started. Now you need to make a stuffing. It's quite simple: with a fork, rub cottage cheese with egg yolk and sugar, then pour the mixture with butter, pre-melted, and mix. Cut a small piece of the prepared dough and roll it with a rolling pin into a thin flat cake, then attach a glass or a small cup and cut out the mugs. Now, for each of them, put some curd filling (one and a half tea spoons will be enough) and tighten the edges tightly with your fingers. In the same way prepare for cooking and other vareniki. If they get too much, do not worry, just freeze the dish until the next meal. Boil vareniki with cottage cheese in the boiling water, with the addition of table salt at the rate of one spoon (meaning a dining room) for four liters of boiling water. When they come up, take one and taste it. Welded, the dough is not damp? If so, take the dumplings out of the pan, lay them over the plates and serve them on the table. Above, the dish can be poured with butter or low-fat sour cream. Bon Appetit! 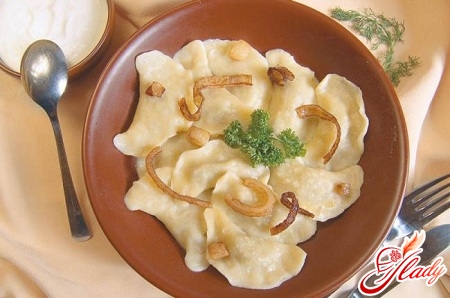 Vareniki on yogurt with cottage cheese and raisins

This recipe was used by our grandmothers as well. The dough on kefir turns out to be airy and gentle, so your dumplings with cottage cheese will be eaten in one minute. So that no one remains hungry, try to cook as much as possible! Ingredients: For the dough:

Cooking method: Combine the chicken egg with sugar and whip with a fork. Then pour the salt into the wheat flour and unburned soda, mix thoroughly and form a funnel, gradually pour into it kefir and eggs. Knead with dough hands - it should come out tight and elastic. Once everything is ready, cover it with a towel and set it aside for thirty minutes. This recipe for the filling includes cottage cheese, but you can safely replace it with baby sweet curds or a ready-made store weight. So, it is good to mash the curd with sugar for a homogeneous consistency. If the mixture is too dry, add one or two tablespoons of sour cream. Raisins pour boiling water, leave for fifteen minutes. When it is soft enough, rinse under the tap, squeeze and add to the rest of the ingredients. Some housewives also pour a yolk, but we recommend doing this only if the eggs are homemade. An unverified product can carry a disease such as salmonella. Dough roll into a thin layer and form small mugs with a conventional glass. Then in the middle of each place the cottage cheese stuffing. Make sure that it is not too much, otherwise your creation will disintegrate. Then, pierce the edges of the dumplings with your fingers and boil in boiling water. When they rise to the surface, get one and taste it. You can also prepare this dish for a couple: keep each dumpling for three minutes on one side, and then on the other. Just before you put the food on the table, grease it with butter. You can serve it with homemade sour cream, cream or flavored honey. By the way, if you want to make vareniki on kefir, but this product is not at hand, and go to the store there is no desire, replace it with curdled milk or sour milk.

This is an economical recipe for Ukrainian vareniki on the water. You will need a minimum of products and very little time. Try it! Ingredients: For the dough:

Cooking method: Pour the sifted flour into the plate beforehand, form a shallow notch in it and lay the butter, cut into cubes. Whisk in a separate bowl of eggs and add them to the above ingredients, season with salt and mix thoroughly. Then, slowly, with a thin stream, pour in cold water. Knead a steep dough. After sprinkle the work surface with a few pinches of flour and lay out the finished mass on it, several more times with your hands and leave for a short time. The recipe for this filling for vareniki is similar to the previous ones, the main difference is vanillin. To make it, combine sugar, cottage cheese, one yolk and vanillin. Stir well all the products until smooth. Now use a rolling pin to roll out the thin dough and form a circle with a glass or a cup. On their middle lay out a half spoonful of curd-vanilla filling and pinch around the edges. Your dish is ready! Vareniki can be sent to the freezer and removed as needed. They cook in the beginning to boil slightly salty water. Served with sour cream, honey or melted butter. 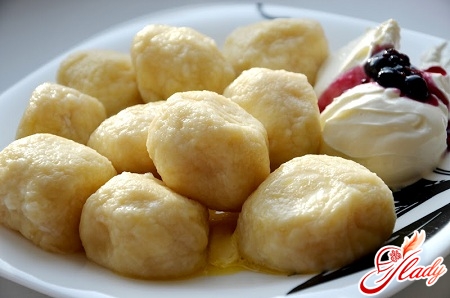 This recipe should be at hand at eachwomen, because many children are not indifferent to lazy vareniki with cottage cheese. Their huge plus is in the simplicity of cooking. In addition, the required set of products is small and completely not expensive. Ingredients:

Cooking method: In order for the home curd to be better formed, pass it through a sieve or take a meat grinder for it. Then its mass will be homogeneous. But if you are using a store product for making dumplings, then you should not prepare it - it's enough small enough. Now rub cottage cheese with sugar, and put the last to your taste. Then add egg, flour and stir well. If you want the taste of cottage cheese to be palpable and predominant in the dish, put less flour (about three spoons) or just take it more than is written in the recipe. However, it should be borne in mind that the more tender vareniki, the worse they behave when cooking, that is, they break up. Divide the dough into three or four pieces and place it on a floured board. Then each roll with your hands into a thin sausage and cut with a knife into small pieces (approximate length - 1.5 centimeters). Form of them "coins", in the middle of which make a dent with a finger - this will help the dumplings to keep the sauce. Cook them in lightly salted water, while the fire should be moderate. After they come up, hold for three more minutes and take out. Serve on a table in beautiful plates, pour sour cream. As a sauce, you can also use melted domestic honey or jam. We think your child will not refuse such a dish. As you can see, vareniki can be cooked in different ways: on kefir, water, yogurt and so on. Choose a simple test recipe, try it out in practice and make a dish, constantly changing the filling. In the summer season, fruit is suitable, and in winter vegetable (for example, from potatoes or cabbage). So do it for pleasure and be full! We advise you to read:

Pilaf from pork in a multivariate