Lazy vareniki with cottage cheese are familiar to manythe very childhood. This dish is very often fed babies in kindergarten. Therefore, already being adults, feeling the taste and aroma of this dish, we remember the past: small pranks, smiles of educators, mother's embrace. If you want to learn how to make such vareniki, then you are right where you need it. Choose one recipe (or several) of the following, buy food and boldly start cooking!

This recipe will help you in cookinga perfect breakfast for your child. Cottage cheese is a very nutritious and important product for a growing organism, but not all children love it. And it's just necessary. Therefore, to avoid quarrels and hysterics, make vareniki, pour them with melted honey or butter, and your baby without any indignation eats everything clean. Ingredients:

Cooking method: We offer the simplest recipe. You can make this dish in just ten minutes. So, to make the home curd as best as possible, rub it through a sieve or use an ordinary meat grinder for this. In this case, the mass will be more homogeneous. But if you bought a store product, and not a home product, then do not prepare it - it's so small. Mix sugar with cottage cheese and mash so that the sweet ingredient is not visible and does not crunch. After add the chicken egg, then - the wheat flour and stir everything thoroughly. In the resulting mixture, pour a few spoons of flour. If you want a delicate taste of cottage cheese to prevail in the dish, then put as much flour as possible. However, know that in this case the probability is high that during the cooking the lazy ones will disintegrate. Because the product is softer, the worse it behaves in boiling water. When everything is ready, divide the dough into several pieces and lay it on the kitchen table, which is pre-sprinkled with flour. Now roll each serving into a not too thick sausage and cut into pieces about one and a half centimeters long. Slightly stretch the dough with your hands, thus, form a "coin" and make a slight dent in them with your finger. So the products will be able to retain the gravy. Boil the water, lightly salt it and put the vareniki. Cook on a quiet fire, and when they come up, wait another two minutes and get them out with a noise. If you have your own tried-and-true sweet sauce recipe, you can use it to make a sauce. We suggest we pour the dish with sour cream. We hope your child will be satisfied! 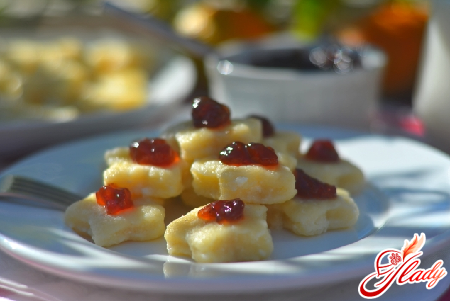 Lazy vareniki from the semolina

We offer one more recipe for sweet dumplings from cottage cheese. However, this time instead of flour used semolina. Thanks to this, the products are even more gentle and lush. Ingredients:

Cooking method: Using a whisk, whisk in a deep bowl one egg, butter, vanillin, and sugar. The mass should leave a homogeneous and without grains. Cottage cheese is recommended to pass through a sieve, then it will be smaller. Mix it with the previous ingredients. Now enter semolina, several more times mix until uniform and put the dough into heat for about 60 minutes. After this time, sprinkle a few handfuls of flour on the work surface and lay out the finished mass. Well knead it with your hands and form sausages. Then cut the last into thin pieces. As you can see, the recipe for cooking dumplings is fairly simple, it remains only to boil them. To do this, put salty foods into the salty boiling water so that they do not stick to the sides of the dishes. After five minutes, take out their noise. Spread dumplings on plates and pour with butter, pre-melted. You can also use honey or condensed milk. Bon Appetit! There is far more than one recipe for this food - each of them is good in its own way. If your family loves lazy vareniki, read the culinary literature and surprise your family with a variety of options for this dish.

Salted dumplings for the lazy

Want to know the recipe for salted dumplings, which are prepared in just fifteen minutes? Then read and remember! Ingredients:

Cooking method: This recipe is similar to the one we described above for the preparation of sweet dumplings, the only difference is that sugar is replaced with salt. Beat with a mixer (or regular fork) cottage cheese and chicken egg, then add a couple of small spoons of table salt. Now enter the flour, pouring it in small portions and constantly while mixing. The dough should not stick to the hands. When finished, cover the finished mass with a clean towel and set aside for fifteen minutes. Then sprinkle the surface of the kitchen table with wheat flour and lay out the dough, with your hands divide it into three parts, roll each sausage. Now take the knife and cut the pieces into small pieces - so you should get some kind of coins. Push them with your finger and make a groove. Using this recipe, you can make dumplings in the form of cubes. As you like best. It remains very little: put the products in boiling water, a little salt and cook for five to seven minutes. Then spread out on plates and mix with a piece of butter, then the vareniki will not stick together. If the dish seems to you dryish, you can use this recipe for gravy: cut thin onions with onions and fry it in a saucepan with cream or olive oil. Then pour the dumplings on top.

Oatmeal plus cottage cheese is equal to vareniki

Surely you have never read such a recipevareniki. This time the dish consists of homemade cottage cheese and oat flakes and has a rather unusual taste. You just have to cook this food! Believe me, I will not be sorry. Ingredients:

Cooking method: Of these ingredients will be a very small portion of vareniki, so to speak, for testing. However, if the dish you like, just increase the number of necessary products. Rub cottage cheese - use a sieve for this. Then mix it with oat flakes, wheat flour and butter, which must be pre-melted in a steam bath. Very carefully mix everything. We did not specifically write a recipe indicating a certain amount of sugar. Perhaps you want the dish to be salty. Depending on your preferences, add this or that product to your taste. When the mass is ready, place it on the flour-strewn table. After divide into several portions and roll out each long sausage. Cut them with a knife into small squares and roll in flour. Boil in boiling water with a little salt in just five minutes. Lay out the finished products in a bowl, add butter, you can sprinkle finely chopped fresh dill. Some prefer sour cream, and if you made sweet dumplings, then homemade jam will do. 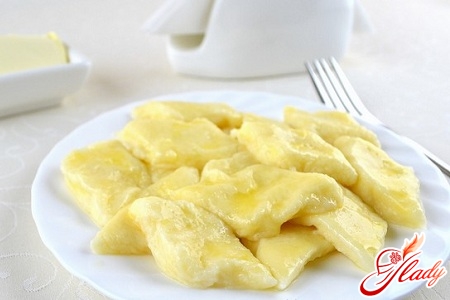 Lazy dumplings on water without eggs

Try another version of the fast dumplings, which are prepared without eggs with the addition of boiled water. Ingredients:

Cooking method: The procedure for kneading the dough is very simple: in one bowl, combine sifted flour, salt and pour boiled warm water. Stir well until smooth. Then enter the cottage cheese with sugar and knead the dough with your hands. The mass should be quite dense. Now divide it into three portions and roll each into a long tube. Cut the sausages with a knife into medium pieces. Put everything in the beginning to boil the water, throw a few pinch of salt and cook for six minutes. After you take out the products with a noise, spread out on plates and pour cream or sour cream. Eat with pleasure! Lazy vareniki are ideal for breakfast or snack. They are very light, quickly absorbed and do not leave behind an unpleasant feeling of heaviness in the stomach. We advise you to read:

Recipe lagman at home for mistresses

Recipe for baked duck: all ingenious is simple