Macaroni with Bolognese sauce - a traditional dishItalian cuisine, the classic recipe for cooking which in modern cooking has undergone a number of changes. In the province of Bologna, where this sauce originated, cooks needed at least two hours to create it, and served it with lasagne, tagliatelli or foam - special pasta. Today, tomato and meat pasta with vegetables often becomes a sauce for spaghetti, and the composition of the dish can be very diverse. In order to prepare the spaghetti Bolognese, we should pay special attention to the selection of ingredients - they must be quality and fresh. The classic recipe of the dish recommends using a fat veal tenderloin as the basis of the sauce. Meat should be twisted in a meat grinder or chopped in a blender. Many other recipes of Bolognese allow the use of ready-made pork-beef minced meat or even loin, bacon. In any case, the meat ingredient should be fat enough. The recipe for the Bolognese pasta can be "in a hurry" and consist of the most accessible ingredients - the available meat products, tomato paste, onions and carrots, and another recipe can be a real masterpiece of cooking, which will require a more extensive list of necessary products. There are also industrial blanks for spaghetti Bolognese. The recipe in this case is reduced to the preparation of pasta and roasting of meat, to which then a canned mixture of vegetables is added. Special value in this dish is given to spices, as a rule, it is Italian herbs - basil, oregano, and also black ground pepper, salt. So, you can bring a few popular recipes of spaghetti with Bolognese sauce, differing in composition and method of preparation. This recipe is closest to the classic version of the preparation of spaghetti Bolognese. Ingredients:

Cooking process: Wash meat, dry with a paper towel, cut into cubes and pass through a meat grinder. Peel onion, cut into small cubes. Grind the stalk of celery, grate the carrot with a small grater. Tomatoes to pass with boiling water, peel and rastoloch in mashed potatoes. Cut the garlic as small as possible. In a deep saucepan pour in the olive oil, melt the butter and save the onions and garlic until transparent. Pour carrots and celery and fry for a few minutes. Put into the saucepan to vegetables mince, tomato puree and simmer, stretching with a spatula lumps, for 15 minutes. Then pour the wine and wait until it evaporates. Sprinkle the sauce with spices, pour the cream and broth, mix and cover. Simmer over low heat for 5-10 minutes. Now you should start cooking spaghetti. To do this, bring to a boil 1.5 liters of clean water with the addition of salt and 1 tablespoon of olive oil. Place the pasta in a saucepan, bring it back to the boil. Spaghetti is important not to digest, so 7-8 minutes will be enough for their preparation. Then throw the pasta in a colander, rinse with clean water. Spaghetti is spread on a flat plate, and Bolognese sauce is poured on top.

Spaghetti Bolognese with bacon and cheese

This recipe allows you to diversify the daily menu, it is a delicious option for cooking Bolognese sauce. Ingredients:

Cooking process: Cook the pasta until ready in 1.5 liters of clean water with the addition of salt and olive oil. Fold in a colander and leave to drain. Meat grind with a meat grinder or blender. Carrots should be rubbed on a medium grater, chop the onion and garlic finely. Bacon cut into thin slices, cheese grate on a large grater. Melt the butter in a frying pan, place slices of bacon in it and fry over medium heat until the slices are fried, and the fat will not be drowned. Pour onion and garlic, fry for 1-2 minutes. Add the carrot in the frying pan and fry the vegetables until golden. Place in the frying pan and simmer, periodically rubbing the fork with a fork. Add the tomato paste, red wine. Increase the fire and open the lid to evaporate excess moisture. Add salt and spices, grated Parmesan, stir, cover and simmer for another 10 minutes. Serve spaghetti on a flat plate, sprinkling with Bolognese sauce. Bon Appetit! 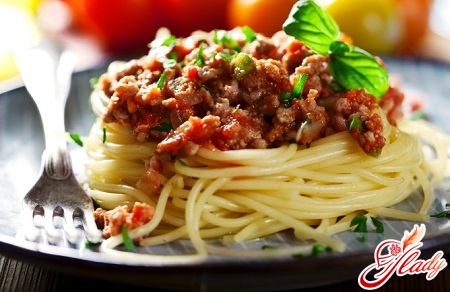 This recipe is distinguished by the presence in the composition of a large number of fresh tomatoes, as well as the way of preparation - in the oven. Ingredients:

Cooking process: Wash meat, dry with a paper towel, cut into cubes and pass through a meat grinder. Peel onion, cut into small cubes. Grind the stalk of celery, grate the carrot with a small grater. Tomatoes to pass with boiling water, peel and rastoloch in mashed potatoes. Cut the garlic as small as possible. Grate the cheese on a large grater. This recipe provides for the preparation of pasta in a pan, preferably cast iron, since the dish will languish in the oven. Put olive oil directly in a saucepan, put on fire and fry onion, carrots, celery, garlic until golden. Then add the meat to the vegetables, mix thoroughly and fry for 10 minutes. Meat should be kneaded with a fork so that there are no lumps. Pour tomato puree into a saucepan, add tomato paste and spices, mix thoroughly, sprinkle with grated cheese. Place the sauce pan in the oven, heated to 200 degrees. Cook the dish for half an hour without mixing. Ready-made Bolognese sauce is an excellent addition to the garnish of Italian spaghetti cooked in salted water. Now you know several popular and delicious recipes for cooking this original Italian dish.

Pilaf from mutton in a multivariate is delicious

Pilaf in a multi-pressure cooker: recipe

Pilaf in a pot with chicken: how to cook it?

Beef pilaf in the multivariate: the process of cooking

Recipe for duck fillets for lunch with the family