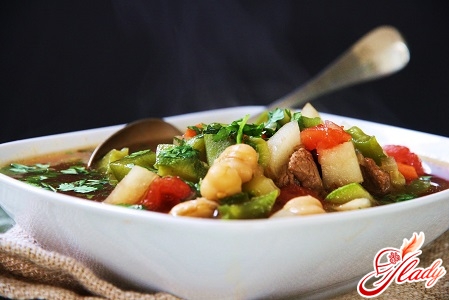 Shurpa - quite common in the Eastrefueling soup, which can be called differently: chorpa, shorpo, sorpa. This soup without a good mutton can not be cooked. You can make a shurpa from chicken or combine chicken (take a cock) with lamb. There are many different recipes for shurpa, but they are united by one - it is always fatty and hearty soup seasoned with various spices. Shurpa is both the first dish and the second at the same time. 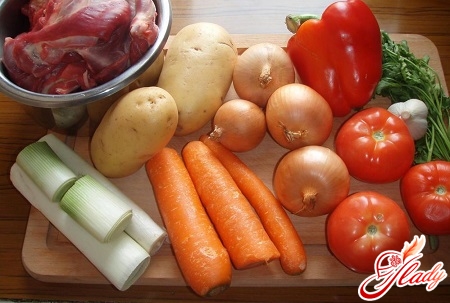 Selection of meat and dishes

To make a delicious shurpa, you need to choosegood meat. Good for soup preparation is a scapula, neck and back lamb. From the neck will get a great fat, from the scapula there will be fat, and meat, and from the back - more meat. We go to the market, there you can choose more fresh meat than in supermarkets. Experts recommend broth for the broth to buy the meat of the female, as the meat of the male is worse in taste, and if suddenly it is stabbed incorrectly, the smell of animal urine will be heard. Sellers, of course, do not say who sell: the female or the male, so we'll try to figure it out for ourselves. Good meat is looking for such signs - it's softness, smell and color. Do not hesitate to smell the meat. The meat of the female smells nice and the color is darker than the meat of the male. To check with the meat cut a little fat and match a match, the fat should smell good, but if there is no scent, then it's better to continue the search for meat. Meat should also be bought with a young lamb. The blade of a young lamb reaches a size of 40 cm. When buying a back part, try to pierce it with a knife. Young meat is easily pierced. After buying meat, ask the seller to cut it. After buying meat we select what we will cook soup-shurpa. Shurpa is cooked in a cauldron, or in a cast-iron pot, which has a non-stick coating. First in this saucepan fry the meat, then in it we will extinguish the vegetables. In the absence of cauldron, fry the meat in a conventional frying pan. Lamb after frying we put in a saucepan in which we plan to prepare a shurpa.

How to start broth

Now we start to boil the broth. Let's start with soaking the meat. For an hour and a half, we'll fill the lamb with water from the well. This contributes to the departure of the syhrova, the remains of wool, garbage; the better the meat is washed, the better for broth. Then we put the pieces of well-washed lamb into an existing vessel, fill it with water and send it to the stove. Having started to prepare a broth, be reserved patience as on preparation will leave from three till five o'clock. When there is a "noise", it must necessarily remove the first time, if we want to achieve transparency of the broth. After three hours of cooking, try meat. If lamb is already ready, then we add cloves of garlic to taste, two onions, half a teaspoon of zira and salt. Another half an hour cook and turn off, pulling from the broth garlic and bulbs. The broth is ready. 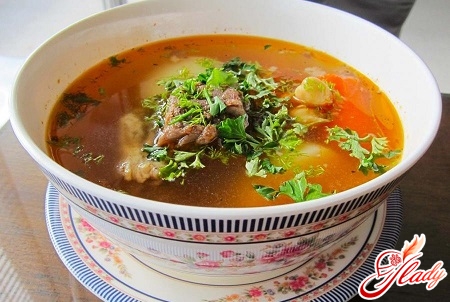 Vegetables and spices for shurpa

Now let's talk about vegetables for shurpa. There are three ways of cooking vegetables:

The first way is not entirely successful, it is uncomfortable sitting behindtable, eat carrots or onions entirely. The second option involves cutting all vegetables, excluding potatoes. This option assumes that meat with potatoes is served on the second. While you eat the first, the meat and potatoes will cool down, and with uneaten lamb fat it is unpleasant to eat. If you understand, soup cook for soup, to eat it as a liquid dish. After all, no one came up with borsch to get cabbage with meat and this is considered the second course. The third option, when all vegetables are cut, is the best and habitual for most housewives. Brewing broth, we take meat out of it, separate the bones, cut them in small pieces, filter. Traditionally, such a set of vegetables is used:

Sometimes, supplement the shurpa with cauliflower or"Blue" (eggplant) - only this is not traditional for soup-shurpa and is already a matter of taste. When preparing shurpa, spices are used: half a teaspoon of hops-suneli, coriander and chabra, as well as a pinch of seeds of zira. Vegetables cut as follows: semirings - pepper, onions, carrots and tomatoes, and potato shred large. In the broth, which is about to boil, we throw meat, carrots, potatoes and continue to cook. We try the potatoes (ready to be slightly damp) and lay the rest of the vegetables according to the recipe. We take off when the potatoes are cooked. We leave the soup for a quarter of an hour.

Some of the best recipes of soup-shurpa with lamb

Classical shurpa from lamb Quite a simple recipe of shurpa with lamb, but the soup turns out excellent. We prepare and use the following products:

Rinse well the meat, cut into small pieces. Slice the bacon fat. After cleaning and washing the onion, we cut it with rings. Salo in kazan fry until squash, then cracklings pull out and into the fat we lower the pieces of lamb and fry well. The next step is to put potatoes with onion, tomatoes and fry for 15 minutes. In the contents of kozan water, add bitter pepper, salt and leave to boil. After boiling, we mark the time and cook for one hour in a muffled fire. Before removing from the plate, add to the broth bay leaf, dill and coriander. The dish is ready, we pour it hot in plates and treat our friends. Agree, the recipe is really simple. Shurpa in Uzbek This is a recipe for a hearty soup with mutton (ribs of lamb) from Uzbek cuisine. Take these products:

Rib ribs well washed, put in a bowl(a cauldron, a saucepan), fill it with water from a well and put it to boil. All the vegetables mentioned in the recipe, clean and wash. We cut potatoes into large blocks, carrots - circles, onions - rings. When the broth with mutton ribs is ready, we will lower in it potatoes, carrots, halves of tomatoes. We put the Bulgarian pepper, peeling it and cutting it into rings. Cleaning from the fire, you need to fill the shurp with greens and onions. Ready soup hot poured into plates and served to guests. Shurpa with mutton and chickpeas (Asian peas) With the preparation of soup by the last recipe will have to be procured. But with Asian peas shurpa is especially delicious.

Chickpea will be soaked in water in the evening and left for the night. The next day, we pour the meat and fat on the water and start cooking. Then after half an hour in the pan, add the chickpeas. Fans of the acute can add a bitter bitter pepper. Boil the meat with chickpeas until half cooked, try and add onions, Bulgarian pepper, carrots and tomatoes according to the recipe, before cutting everything. At the end of the cooking, we put the large crumbled potatoes and herbs according to the recipe. To make a shurpa, you can replace lamb with goat meat - it will also be delicious. Keep in mind that freshly brewed broth can not be stored for a long time hot, its taste can worsen. It is important to decide what you want more: get the perfect broth or tasty meat. If you cook soup on low heat, the taste of meat deteriorates, but the broth will be excellent. And if the meat broth is cooked on strong, then the broth will be worse, but the meat will taste better. When choosing any recipe shurp is sprinkled with greens: basil, parsley, cilantro and tarragon. Serving a ready soup, a piece of lamb is added to the plate, you can fill the shurpa with sour cream. The dish must be served hot, until the mutton fat is frozen. The above recipes will help any mistress prepare a delicious shurpa.