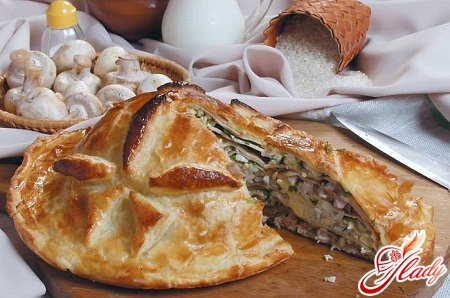 Kurnik is a traditionally Russian dish. Most often it was made multilayered, high, in the form of "caps of Monomakh". Kournik was served on the royal tables even in the times of Ivan the Terrible. Great church feasts did not do without this dish. Especially loved to cook this dish for Easter, Trinity. All on the eve of the holiday are preparing, fussing with such bright feelings. Pancakes smell all over the house (the core of the curlin is a pancake). He also had to be on the wedding table. The pie was prepared both in the family of the groom, both in the family and the bride. The recipe for a kurik from pancakes was passed down from generation to generation. Kournik is a traditional festive dish in many families. The main ingredient of the curlin is chicken meat (hence the name). The ingredients in the pie recipe are important. Chicken and egg - a symbol of fertility, the continuation of the genus, flour - the basis of life, groats - a symbol of well-being and harmony. It is believed that the most delicious curry is obtained in a Russian oven and always on birch logs. Currently, the recipes of the kurik have become simpler, some do not even bake pancakes and do not use cereals. Some replace croup for potatoes. Recipes for cooking a kurik set. This dish consists of pancakes with three different fillings. Ingredients for pancakes: 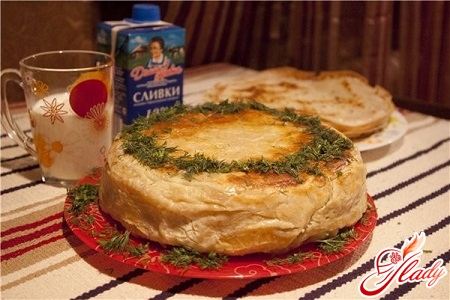 Cooking pancakes for a tortilla

You need 9 to 15 pancakes. Depends on your taste, high you want a kurik or not. The recipe for pancakes is simple, you need to beat the eggs with salt, sugar, add milk, vegetable oil and at the end - flour with soda. Let stand the test for 15 minutes, so that the flour "revived". After the pancake dough "revived" with pepper pancakes. Then we prepare the products for the filling. You will need:

Preparing the filling for the kurik

Cook chicken fillet until cooked and cut intopieces. Separately in a frying pan fry onions in vegetable oil. Then fry the mushrooms. Mushrooms can be any for your taste. If it's mushrooms, then you can immediately fry them, and if it's forest mushrooms, then they must be boiled first. Half of the fried onions are mixed with mushrooms, the second half is mixed with chicken fillet, add spices. Eggs are cut finely, mixed with greens and rice, best suited green onions. You got three kinds of stuffing. This recipe is different in that it has a sauce, which gives a tender taste to the curry. For a sauce you will need: 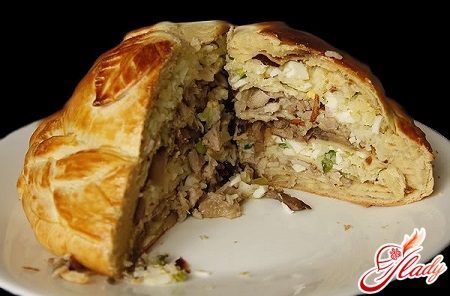 Preparation of the curry sauce

You need to take a frying pan with a thick bottom and meltbutter, add flour. When the mass becomes homogeneous, gradually pour a glass of hot milk (just hot, so that there are no lumps), stir and add the remaining milk. Season with spices and simmer on low heat for five minutes, let cool. Sauce can be replaced with sour cream. We turn to the preparation of the curlin itself. For this we roll the puff pastry and stele on the bottom of the mold so that the edges of the dough hang from the mold. Form for baking pre-lubricated with oil. The shape of the kurik depends on the shape in which you will bake: rectangular or round. To make it easier to remove the pie, it is recommended to take a split form for baking. It is also good to use a silicone mold. Put the first pancake and grease the sauce, on one layer usually leaves for two pancakes. Top spread out the stuffing from the mushrooms and grease the sauce, then the next two pancakes + chicken filling + sauce, then the next two pancakes + egg stuffing + sauce and so on. The last layer should be made of pancakes, also grease it with sauce and cover it with a layered dough. We protect the edge of the puff pastry, which hung from the mold, and the edge of the top layer of the dough together. From above it is desirable to decorate with different figures from the puff pastry. Cut flowers, asterisks, etc. It looks nice when a kurik is made in the form of a chicken, and on the edges of the cake are laid out figures from chickens. Lubricate with yolk and send to a preheated oven for 30-40 minutes. at a temperature of 180 degrees. You can sprinkle the top with grated cheese, and then decorate it. It all depends on your taste and preferences. Perhaps you will put your zest in the recipe. When the crust is browned, the cake is ready. It can be served with chicken broth, which remained after boiling the chicken. And to make the broth tasty and flavorful, when cooking chicken, add the onion head (not cutting) and the bay leaf. This wonderful recipe recipe will please you and your friends. Bon Appetit!

Pancakes from the courgettes are magnificent: a recipe

The recipe for pancakes on sour milk: simple and fast

Sand cake with apples: an appetizing idea for breakfast