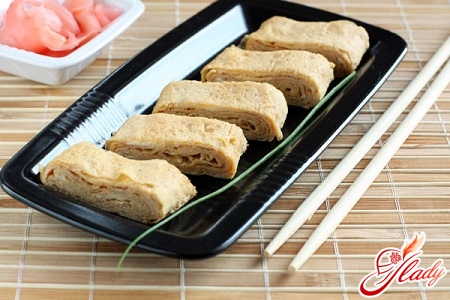 Oh, someone, and the Japanese know a lot about healthy food! They have neither a prescription, it's just a storehouse of vitamins. And they respect seafood, and they have quite a few desserts, and the rest of the dishes will not cause any particular harm to the figure. But nevertheless, Japanese cuisine remains a mystery for us with seven seals, although we are trying to disclose this secret. Therefore, today not only Japanese restaurants are popular, but also recipes for dishes that can be cooked at home. By the way, prosaic and ordinary at first glance dishes in the Japanese interpretation acquire a special taste. Want to make sure? Then try to cook, for example, a Japanese omelet. The recipe for this particular dish is what we offer you. By the way, the Japanese cook it both as an independent dish, and as part of the garnish, and for the rolls.

A classic recipe for a Japanese omelet, whichis also known as tamago-yaki. The taste of this dish is quite specific. But if you like Japanese cuisine, then the recipe for omlet tamago yaki will surely interest you. Ingredients:

Preparation: If you really use the classic recipe, then you need to make an omelette according to all the rules. Therefore, in addition to the products listed, prepare a mat wrapped in a food film, a sieve, a square brazier with a non-stick coating. Are you ready? Now let's start cooking. Eggs break into a bowl and mix (do not beat!) With a fork. Now pour in rice wine and soy sauce, add a tablespoon of powdered sugar and mix again. At this stage, the mixture should acquire a light brown tint. Next, we need to strain the egg mixture, so that the omelet has a characteristic silky texture. To do this, just pass the mixture through a sieve. Now put the pan on the fire, pour a little vegetable oil into it and let it get hot. When the light smoke comes from the oil, gently pour a little egg mixture into the frying pan to cover the entire bottom with a thin layer. As soon as the bottom of the pancake is browned, tuck it from one edge with a spatula and fold it in half. Half of the frying pan was freed from us, and we poured another thin layer of egg mass onto it. We wait for the browning of the second pancake and, poddev it with a spatula, turn it over, putting it on the first. So bake omelet pancakes, layering them on each other, until the whole mixture is finished. Note that a growing pile of pancakes all this time remains in the frying pan. After that, shift our multi-layered omelette onto the mat, cut off the uneven edges and give the omelette a rectangular shape. A large plate is painted (arbitrarily!) With Teriyaki sauce, from one side we put a handful of grated radish, on the contrary - parsley sprigs, and between them - tamago-yaki cut into triangular pieces. 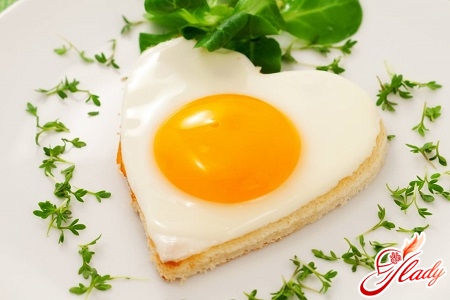 How to cook a Japanese omelet, when not,for example, rice sweet Mirin wine? And the very process of preparation requires a certain skill. Therefore, we offer you adapted to our domestic products and a simplified recipe for Japanese omelet. The main thing here is to learn how to make a neat roll from omelet pancakes. Ingredients:

Preparation: The recipe is actually very simple, in any case, in composition - all the products for it are available. One notable point: we will make an omelet from four eggs and one yolk. So, we pour the eggs and yolk into a bowl and whip it all with the help of a whisk, and then filter the whipped mixture through a sieve - this too requires a traditional recipe of a Japanese omelet. In a strained mixture we put sugar, salt and pour in soy sauce and white wine. After that, again whisk together all the corolla until the uniformity and complete dissolution of sugar and salt. Now put on the fire a conventional pan with non-stick coating and lubricate it with oil. In a heated frying pan pour the third part of the omelet mixture and wait for it to brown from the bottom and grab from above. After this, very quickly using a spatula and helping with a fork, we turn off the omelet pancake into a roll. We leave it in a frying pan, and on the liberated part of the bottom we pour another portion of the mixture. With the second pancake do the same. Just turn it on the other side so that the first roll is inside the second pancake. And then pour the remains of egg mass into the frying pan, bake the third pancake and roll it into a roll with the previous ones. Our Japanese omelette is ready! Remove it from the frying pan, give it a rectangular shape and serve with wasabi and pickled ginger.

Japanese omelette on a rice cushion

The recipe is very simple, and the resulting dish will please you not only with an unusual taste, but also with an original look. Serve this omelette best to fried red fish. Ingredients:

Preparation: For a rice cushion, it is advisable to take croup, which has sufficient stickiness. It is from such rice that we can easily make rice pads. So, boil rice in salted water, throw it into a colander and rinse. Now break the eggs into a bowl and add the soy sauce and sugar. Salt in the mixture to put it is not necessary - its function is just fulfilling the soy sauce. Waiting for the sugar to dissolve, and whisk the mixture until light foam appears. Then we take a frying pan (preferably with a non-stick coating, since the omelet mixture is with sugar). To ensure that the omelette is not burnt and easily removed from the pan, grease it with vegetable oil and put it on the fire. When the frying pan is heated, pour out the omelet mixture into it and fry it under the lid. Then the omelet will turn loose. Ready omeletu let cool and cut it into pieces according to the size of rice pads. From the boiled rice we form cushions in the form of cubes. To do this, first roll the dense balls, and then take them from the sides. For each pillow, put a piece of omelet and decorate with red caviar. Serve to fried red fish in the form of a garnish. It turned out very Japanese! 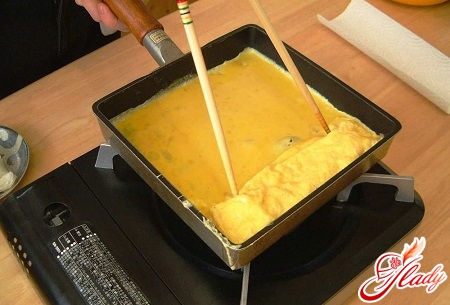 Famous rolls, sushi and sashimi Japanesethey cook with an omelette too. It is noteworthy that this omelet is used either as filling for rolls, or as a wrapper. In the first case, it is prepared according to a traditional recipe, and in the second it is baked in the form of thin pancakes. So if you're thinking about experimenting in this direction, then try making an omelet for rolls with rice. Ingredients:

Preparation: Eggs slightly whisk, add sugar powder and pour in liquid ingredients. Once again, drive the mixture and bake thin omelet pancakes in a pan with non-stick coating. Ready-made pancakes can be used to prepare rolls with rice. If you need an omelet filling for rolls, then just prepare a traditional tomato yaki, and then cut it into multi-layer strips and make one of the components of the filling. Rolls with rice and omelet are very delicious. Here's a different omelet in Japanese. By the way, the recipe can be varied, baking pancakes for a roll with some filling. You can, for example, sprinkle half-finished pancake stewed vegetables, you can add sliced ​​small chunks of ham or greens. And you can sprinkle a pancake with boiled rice or sliced ​​cheese. True, it will not be a real tamago-yaki, but an omelet based on Japanese cuisine. So it's a little thing. Choose a recipe and learn to make a roll of omelet pancakes. Of course, the Japanese omelet turns out not quite familiar, but very tasty, porous and silky. Try it - maybe this dish will become your brand. The main thing is to cook with pleasure. Enjoy your appetite and success in the culinary field!