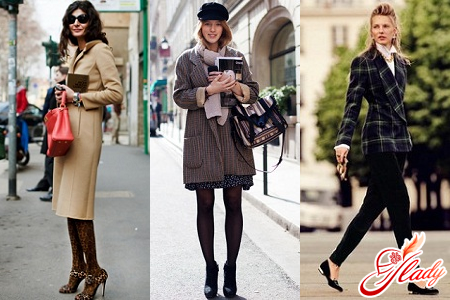 About French fashion and French style writtena lot, but at the same time not everyone understands, but what he is. Let's try to figure it out together. What is a stylishly dressed Frenchwoman and how is she different (and different) from the so-called style icons, which we can see daily on the pages of Russian glossy magazines? What is it, Paris street fashion? What should be in the French wardrobe? And, finally, what is the secret of that very French chic about which so much is said?

In the representation of the average man in the streetFrance and Paris are associated with such concepts as fashion and style. Which, however, each treats in its own way. For some, it is certainly expensive branded clothing, for others - sequins, feathers, diamonds in the ears, fingers and wrists in broad daylight ... In short, everyone has their own image of a fashionably and stylishly dressed woman. And how to dress French women? The man, who first came to Paris, at first amazes modest (in any case, in terms of colors) clothes of Parisians - gray, black, muted or pastel colors. There are almost no bright colors, and if they come across, it is mostly tourists, including from Russia and CIS countries. We like to stand out and look bright: a bright image is the dream of many. The Frenchwoman treats this differently. Of course, it would be an exaggeration to consider that all French women polls have a good taste and are able to dress beautifully. Freaks and simply badly dressed people are everywhere - Paris is no exception. But still, most people have their own style and there is no blind following to fashion. French women masterly know how to use accessories and combine incongruous. In Paris, a lot of shops, where you can buy cheap things from old collections of famous couturiers - the so-called vintage. Moreover, almost every French city has its own "flea market", on which one can also find a lot of interesting things. And the French women find them and are very skillfully used in their wardrobe. Changing the details of clothes and complementing them with an antique brooch, bow, flower, they look stylish, and create a completely new image. And even the most trivial inexpensive thing from a regular store can start playing with new colors. Any French woman has grown accustomed to accessories since her childhood. Scarf, shawl, hairpin - with these simple things you can change your image easily and simply. This, as they say, is the highest aerobatics inherent in the French style and, unfortunately, absent in most of our compatriots. The Frenchwoman likes good clothes, but will not spend on it sky-high sums. Moreover, now it is customary to update the wardrobe every season, and to spread crazy money for what will be thrown out in a few months is simply unreasonable. A pragmatic European approach, is not it? However, there are things that these women will never spare money. These are shoes and bags. These accessories, complementing the image of an elegant Frenchwoman, should be only of the best quality and necessarily from a good designer, and at a price the Frenchwoman will not stand. And it's worth it. 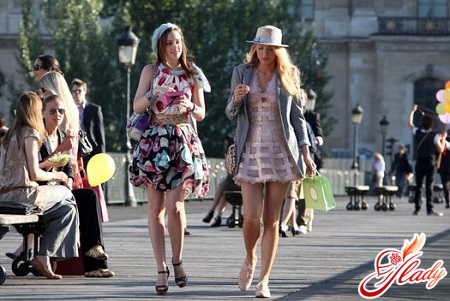 How to dress young French women?

On the streets of Paris, as in the streets of New York,London, Berlin, Moscow, you will see the girls in ragged jeans and simple sneakers, with a backpack behind their shoulders instead of a fashionable and expensive bag. Such is the world, and the young French women live in unison with their time, not differing in part from their peers from other countries. But this is such an unpretentious image for every day, if I may say so. The main distinguishing feature of a modern French woman (independent of age) is to be able to properly dress, which means dressing according to the occasion, is appropriate. And the young Frenchwoman fully owns this gift. For a family celebration, a banquet, a dinner party or a get-together with friends, she will dress quite differently, but each time it will be an image that corresponds to the style of the event. Where does this sense of style come from the young Frenchwoman, accustomed to the standard youth uniform? Probably from childhood. By the way, today a small Frenchwoman also wears elegant dresses, beautiful curvy skirts and elegant shoes more often than her peers in other countries. And for her, it's not a problem to replace comfortable sneakers or sneakers with elegant expensive shoes, and a shabby backpack on Louis Vuitton's purse. 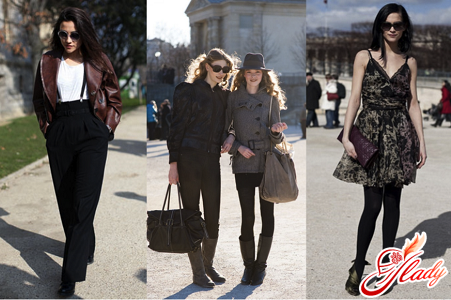 What do the French women look like? Let's talk about beauty ...

French women understand not only thegood clothes, but also in matters of self-care, because the elegant image consists of many leaving, and a good appearance plays an important role in this. They do not spare money for good cosmetics for hair, face and body care. Decorative cosmetics are also in high esteem. In this case, you can often hear that women in France go without make-up. But this is a delusion. The counter is that makeup is not striking. And I must say that in this every Frenchwoman has achieved great heights. The image is impeccable: the tone of the face is even, matte, the eyelashes look absolutely natural, as if they did not touch the brush with mascara, lipstick is almost invisible. As in the choice of clothes, the hand of the master is felt. And one more touch, complementing the image of a Parisian woman is her hair. Visiting a hairdresser is sacred, and every French-respecting woman does this regularly. Plated hair tips, overgrown roots - this simply can not be. Because this can not be ever. And no wild flowers - purple, red, orange - which so often allow our ladies, even at an elegant age. Taste and sense of proportion to French women never change.

So, let's summarize. What did we learn about the French women? What makes them so attractive? After all, many men believe that it is the French women who have that unique charm that makes them so desirable. The answer is simple and complicated at the same time. They are different, like all of us, in something we are similar, in something radically different from each other. But if we try to reduce everything to a common denominator, then we can say the following. They are beautiful in their desire to be natural and maintain their individuality. Fashion is fashionable, but a real Parisian will never wear even the most fashionable thing, if she does not go to her. She will never buy anything too expensive to show her financial viability. In Europe, it is generally not accepted, this is a bad taste and this is "not comme il faut". She will not allow herself a fighting color of an Indian, a neckline for the most "I can not" and tall hairpins for a baggage baggage trip to a nearby bakery. She will never allow herself this at all. And you can not see her nails of extreme length with rhinestones and flowers. Nothing pretentious, pretentious, unnatural. And another phenomenon of Frenchwomen is their natural harmony. The gourmet nation was not prone to obesity. This fact in his time drew the attention of the famous French nutritionist Michel Montignac. He tried to find the answer to this question, and it seems that he succeeded. Montignac concluded that the principle of nutrition adopted in France (mandatory breakfast, lunch and dinner), the use of quality dry wines, the ignoring of fast food is the reason for the absence of obese people, which we see in huge numbers in those countries where the "fast" food". So, the French women are slim and graceful. They are dressed stylishly and elegantly, well-combed, but these hair looks absolutely natural - without a pound of foam, varnish and other nonsense. Add to this an invisible make-up and necessarily a drop of refined perfume - the portrait is ready ... We advise you to read:

What dress to wear for the wedding